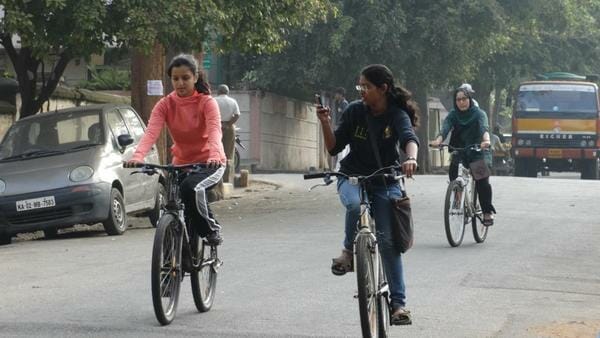 Adventure: Taking the photo of a friend while cycling! Pic: Shree D N

“As I was drinking my cup of coffee in the morning, had the pleasant surprise of seeing kids and one or two adults cycling on 13th cross. Learnt about the event now!”, posts Latha Vidyaranya, a resident of 13th cross, Malleshwaram, on Facebook.

She was not the only one to be surprised. Even as half the population in Malleshwaram was huddled in their cozy blankets on the cold Sunday morning of December 7th, the ringing of cycle bells—a rather rare phenomena these days in this vicinity—woke them up. Residents of 13th cross, 4th main, 7th cross and 11th main in Malleshwaram saw a bevy of cyclists with head gear, racing on the roads freely, even as traffic cops assisted them by blocking heavy traffic.

This was how the first Cycle Day unfolded in Malleshwaram and this is but an evidence of the cycling fever that has gripped Bengaluru. Small children were assisted by their parents to match the speed of the older riders. So when some kids cycled, their parents ran along with them. Traffic cops who were on duty early in the morning, to help cyclists get through smoothly, were later seen playing street games like Snakes and Ladders with the children.

A cyclist tries to click a photo of her friend. Pic: Shree D N

Something for everyone! Pic: Malleshwaram Cycle Day volunteers

A volunteer announcing the plan for the event. Pic: Malleshwaram Cycle Day volunteers

Chess is much more fun when played on the road! Pic: Malleshwaram Cycle Day volunteers

While it is cycling for the kid, it’s a marathon for th mother! Pic: Shree D N

A team of skaters on road. Pic: Shree D Nkaters

The spirit in the air was infectious. Even those who did not know cycling had something to do. Be it playing chess on the boards drawn on the road or skipping on jump ropes or drawing on the road using chalk pieces, the event offered something for everyone. A part of the 13th cross road that was blocked to accommodate street games witnessed a street festival. An impressed old resident of the area was heard saying: “What a wonderful idea! We were doing all this when we were kids!”

There were cycles on rent too, to enable those who did not have their own cycles to participate. Members of Malleshwaram Swabhimana Initiative(MSI) who took up the responsibility of local partnership, were seen ensuring that the event went according to the plan.

Over 250 cyclists registered for the event, while there were also cyclists who did not register. Overall participation in the street games and other events was much more.

Bengaluru Needs You (BNY), a group of youngsters working towards better Bengaluru, placed many posters on how public spaces can be utilised. They also placed a map of Malleshwaram printed on flex, where citizens could write the problem areas and pain points. This attracted many active citizens who penned down their suggestions.

Malleshwaram MLA Ashwath Narayan, Malleshwaram’s own celebrity singer Vasundhara Das, composting expert Vani Murthy and many other eminent personalities of the area were also spotted at the event. Pictures from the event can be seen here.

There was no waste left at the venue, as disposable items were not used, and the volunteers cleaned up the place before leaving. BBMP contributed its bit to the Cycle Day by repairing the potholes on the marked roads.

Says Rekha Chari, Secretary of MSI, who was one among the organisers: “It was nice to see the smiles on the faces of the children as they sat on the street playing all their favourite games, and some long-forgotten games they have never seen… a big change from the TV screens and the mobile games they are glued to today…”

That sums up the idea behind Cycle Day too. Cycle Day is anchored by the Bangalore Coalition for Open Streets (BCOS), a non-profit collective comprising of the Directorate of Urban Land Transport, a wing of Urban Development Department, Government of Karnataka, Praja RAAG, EMBARQ India, ESAF and many individuals. This initiative aims to promote the possibility of reclaiming roads for pedestrians and cyclists who are ignored when big traffic plans are laid out.

When is your area getting a Cycle Day? Mail contact@cycleday.in to organise one in your neighbourhood, or reach out to Directorate of Urban Land Transport.

All we need is love, say Cascade 2010 participants

Cascade 2010 one of the biggest, most vibrant and engaging student cul-fests of the year.

Some options for dining out at JP Nagar and BTM Layout; Plus what was the wine festival at Lalbagh all about?