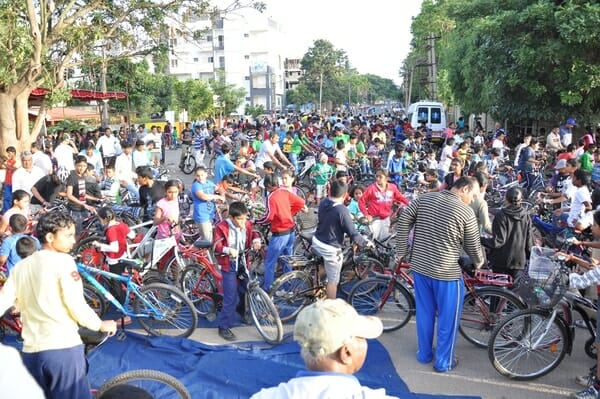 Directorate of Urban Land Transport (DULT), UDD, Government of Karnataka which is part of Bangalore Coalition for Open Streets (BCOS) along with local partner Yelahanka United Environment Association (YUVA) conducted the second edition of the  ‘Cycle Day’ event in Yelahanka New Town next to the Allalasandra lake.

Yelahanka United Environment Association (YUVA) is the local partner in this initiative and have come forward to take this event to their local community. Sunday August 3rd, saw 13A Main Road in Yelahanka New Town, temporarily closed to motorised traffic, and transformed into an “open, people-friendly street” to promote cycling, walking, fitness and community recreation. In addition to creating a safe environment for cyclists and pedestrians to enjoy their streets, Cycle Day also held a series of fitness activities and street games to engage participants of all ages and across all backgrounds.

The program was attended by over 4,000 local residents and cyclists from across Bangalore who enthusiastically participated in the second edition of the event in the area. S R Vishwanath – MLA Yelahanka,  Muniraju – Corporator Ward 4, BBMP-Yelahanka zone and S T Tayappa – President, YUVA addressed the participants and flagged off the cycle ride. The event featured a group ride approximately 4.5 kms. around Yelahanka New town in the area surrounding the Allalasandra Lake, with traffic police and volunteers pitching in to ensure a safe, pleasant experience for those who wanted to try riding on city streets for the first time. The event was kicked off by warm-up session of yoga asanas.

250 cycles were made available at the venue; participants could rent these for free by submitting an original photo ID. Some participants also brought their own cycles to so as to avoid waiting at long queue, and in case the organisers ran out of cycles. 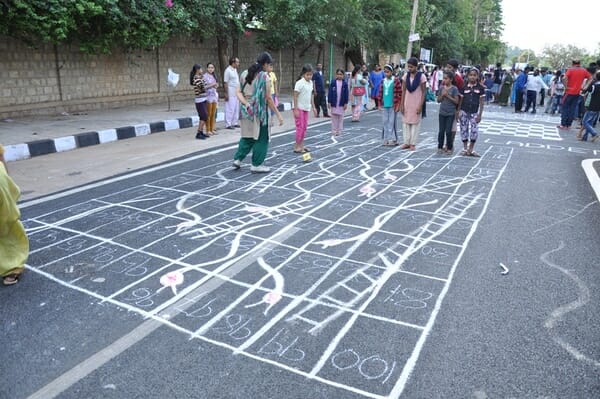 Traditional games played on the streets included chowka bhara, kunte balle, lagori, marbles, snakes and ladders, kite flying on the lake bank, passing the ball, bombing the city, chess, gully cricket, volleyball, throw ball, chess, blindfold and hit the target, balloon blast, slow cycle race – all of these were superb hits, with children and elders participating with enthisiasn. One of the highlights of the event was the folk dance forms of Dollu Kunitha and Huli Vesha which stole the show and was a reminder to the younger generation of this form of folkart. 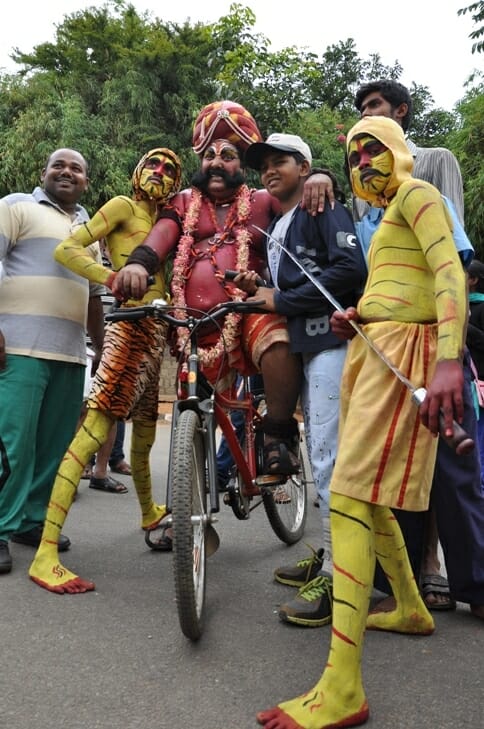 This Cycle Day event was a perfect example of government and community partnership that put up a fantastic show with local Yuva volunteers and participants taking complete pride in hosting this festive event in their neighbourhood. Young and old alike, 3-4 year olds cycling alongside senior citizens, the ladies wing of Yuva coming together to organise the street games – this was truly a perfect setting for a Sunday spent with family and friends. The flavour of old Bangalore is being very well captured in these events when the roads and streets are congestion free and pedestrian friendly.

The glamour quotient to the event was added by the presence of Cine actor, Ravishankar who participated in the event. The event could not have been conducted so seamlessly and effortlessly without the support and cooperation by Police – Traffic & Law and Order, BBMP. It is indeed very encouraging and heartening to see multiple public agencies and the general public coming together to create such a successful and family friendly event.

DULT which is the anchor and principle enabler of this endeavor hopes to continue this participation by signing up with more local partners to carry the message of Cycle Day to their local communities.

Cycle Day is a car-free event where few kilometers of roads are blocked to motor traffic to create a safe and festive zone for people to just come out and try cycling as well as engage in sport, fitness, and community building activities. By putting cyclists and pedestrians first, the campaign seeks to change the prevailing mindset that roads are meant primarily for cars. We want people to re-boot their relationship with the streets to ensure that all users, particularly pedestrians and cyclists, have an equal claim to road space and the right to use streets safely. At the same time the campaign aims to provide our government partners with the public support and impetus needed to create an enabling environment for cyclists through the planning and development of better roads, cycle tracks and lanes, cycle rental schemes, city-wide cycle parking stands and other infrastructure.

Cycle Day is an open street event conducted by BCOS (Coalition of DULT with NGOs) with support from organisations likeBangalore Police (Traffic and Law&Order), BBMP, local sponsors and Decathlon support the event.

The content is provided by Samhita Rajashekar on behalf of DULT and has been published with minor edits, under the Message Forward section, a space meant for non-profit messages by individuals and organisations.