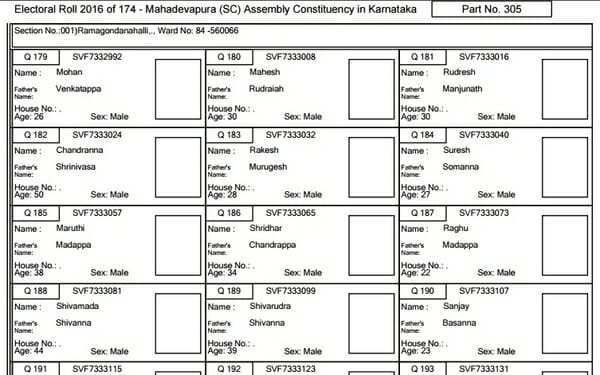 If you are a resident of Hagadoor, Muneshwara Nagar, Kumaraswamy Layout or a few other wards, it’s better you verify your name in the final electoral roll published by the Chief Electoral Officer of Karnataka. There are chances that you might have been “disqualified” from voting! Higher the chances of disqualification if your ward comes under Mahadevapura Assembly Constituency.

Like every year, the office of the Chief Electoral Officer published the final electoral roll for the year 2016, on January 11th. Most of them might not have checked their names in the electoral roll after it was published, as election is not round the corner. But, if you check now, you may end up being the one whose name is disqualified from voting!

Disqualification for no reason

Citizen Matters independently verified partial data and found that in Part 305 of Mahadevapura Constituency, a total of 410 voters have been disqualified. In Part 304 in the same constituency, 179 voters are disqualified.

The supplement part of the electoral roll lists out the additions, deletions and modifications in the voters list. The deletion could be because of expiry, shifting the residence, disqualification or repetition. The reason for deletion is given using letter codes on each of the deleted voters. If letter ‘E’ stands for expiry, ‘S’ is for shift or change in residency, ‘Q’ stands for disqualification and ‘R’ is for repetition.

In some of the wards / parts, the reason for deleting the voter from the list is coded as ‘Q’ which means he/she is disqualified from voting. A person if disqualified, cannot exercise franchise in the election. Moreover, disqualification is not an easy process and CEO cannot disqualify a person from the electoral roll without citing reasons. As per Representation of People’s Act, 1950, a person could be disqualified from registering in an electoral roll only for three reasons.

A person could be disqualified if he/she,

But, none of this seems to be the valid reason for disqualification of voters in bulk in some of the constituencies in Bengaluru.

To dissect the reason for voter roll anomaly, P G Bhat filed an RTI seeking for information from the CEO in January. “After a month, the CEO forwarded the RTI query to EROs asking them to directly respond to me. The EROs after another one month, sent RTI query to AEROs. So far I have got reply from 15 of them, while most of them have chosen not to reply. Some of the AEROs have said that there was no issue in their electoral roll and none are disqualified. Where as some of them have conceded that it was due to typographical error,” Bhat says. He wonders why none of the voters have opted to question the grave error.

Bhat believes that a software change or modification would solve the problem. He has earlier written to the Election Commissioner of India to give directive to all CEOs to modify ERMS data entry software suitably to check many such errors.

When Citizen Matters asked Chief Electoral Officer of Karnataka Anil Kumar Jha about disqualification of voters in such a large number, he said he was aware of the issue and it will be rectified. “Disqualification has happened by mistake. Computer operators might have entered it wrongly in case of voter deletion due to shifting of constituency. I have directed the lower officers to ensure that the clerical staff rectify the errors,” he said.

The Karnataka State Remote Sensing Application Centre has said that ground altitude of Raheja Vivarea apartment at Koramangala is 892 metres. Using this, HAL is arguing that Raheja Vivarea cannot be constructed beyond 13 floors.

This week’s scan of Bangalore’s Kannada dailies includes reports on the police department proposing to change syllabus of sub-inspectors’ training after 38 years to scams in the BBMP waste disposal and more.