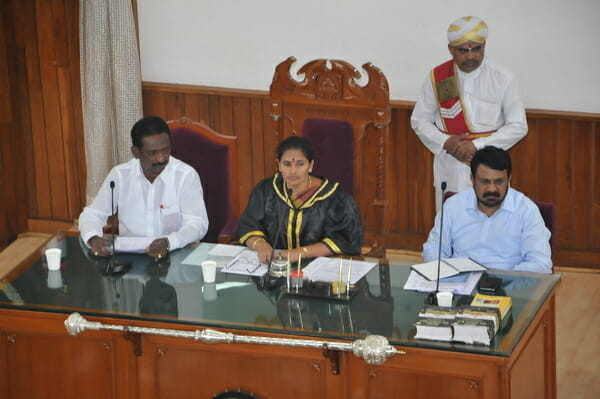 The recent rains and the damage caused because of floods in the city was the topic of hot discussion in the Bruhat Bengaluru Mahanagara Palike (BBMP) council meeting, on Monday, September 2014. Peoples’ representatives used the opportunity to put the blame on officials and to demand compensation for the ‘victims.’

Floods are a perennial problem in Bangalore in the centre of the city. The railway underpass near Anand Rao Circle that connects Gandhinagar, Freedom Park, Majestic, Race Course Road and other places.

Jayamahal ward Corporator M K Gunashekar questioned the apathy of civic officials. He said, “Around 15 to 20 crore rupees have been used for desilting the drains, but flooding still takes place every year. This is an era of RTI act, hence the officers should be responsible enough to show the bills as to where the money has exactly been spent.”

Land encroachments by public and private companies are increasing, which is another major reason for the rain water to cause floods. Corporator Padmanabha Reddy said, “It is not only we corporators who have to be blamed, but also the officers of Legal Cell against whom the action has to be taken immediately. Around 31 guntas of land near Hebbal on Outer Ring Road has been encroached by a builder, due to which major storm water drain gets blocked, leading to blockage of rainwater. All this has happened due to the irresponsible officers.”

‘What did officials do?’

Many other corporators demanded to know the contribution of the Commissioner and other officials during the flood crisis. BBMP Commissioner Lakshmi Narayan said that when flood hit the Gali Anjaneya  temple, the civic officials took up the responsibility, rushed to the place and did a splendid job by draining the water out till 4 am. He also regretted that their effort  at Anepalya did not give  good results.

R Prakash, JD(S) corporator, said he paid a visit to his locality to check on the people hit by rain. He asked mayor Santhakumari to increase the compensation amount given to the affected people. “Currently people are given only Rs 2,000, which will be of no benefit to them and hence please allot Rs 5,000 to each family” he added.

No discussion on corporators who did not declare assets

While entire Council was discussing flood damage, A H Basavaraju, a BJP corporator, questioned why the Chief Conservator Forest of BBMP Brijesh Kumar whose tenure in BBMP is over, but not relieved. BBMP commissioner replied that Brijesh Kumar has sent a letter to the government and waiting for the reply.

The discussion on Munirathna, MLA and corporator of Yeshwanthpur ward and others not disclosing their assets got postponed. This was postponed during last meeting too. “This issue has been added to the list of subjects without issuing a notice to the council which is wrong,” said Gunashekar, Jayamahal corporator.

Illegality and the BBMP: A case of hiding the elephant in a basket!
Understaffed, fund-starved, neglected: BBMP Forest Wing limps on!

Learning beyond school, age no bar

Curious what a lawyer’s life is like? Or a scientist’s? This study centre has been satisfying this curiosity for two decades now.

All you need to know about Ward 117 – Shanthi Nagar

If you are a voter of Shanthi Nagar ward, here is all that you need to know about your ward: Who is contesting, what are the problems, how has the BBMP addressed them in last five years.