On May 15, 2015 a complaint was lodged with the Consumer Redressal Forum by a buyer of an Apartment in an upscale Apartment Complex in West Bengaluru. The complaint cited violation by the builder of one particular rule relating to the Apartment handover.

On May 10, 2018, The Bangalore Urban II Additional District Consumer Disputes Redressal Forum passed a landmark Order against the reputed Builder, in favour of the Complainant.

An engineer/market researcher by profession, Arathi Manay Yajaman was one of the 350 plus trusting home buyers in the complex. But she was also different – a person keenly interested in local governance, she was well-updated on the Statutory Laws and took cognizance of the violation when it happened.

Booking for the Apartments happened in early 2013. The completion letter came in January 2014, well ahead of the deadline mentioned in the Agreement! Buyers were given a month’s time to clear all the dues and take possession, and a deadline to register the propertyThey were reminded that the penalty meter would get turned on after the period.

A couple of months later, owners were informed that the one year warranty for the Apartment would begin from April 2014.

That was when Arathi Manay requested the Builder for a copy of the Occupancy Certificate (OC). “We have applied for it,” came the reply. Mrs. Manay wrote back citing the Bangalore Buildings-Bye Laws 2003 which stated that “No person shall occupy or allow any other person to occupy any new building…….until occupancy certificate to such buildings or part thereof has been granted by an officer authorised to give such certificate.”

Her objection however was brushed aside by the builder. She was assured that internal inspection had been carried out and the official OC would eventually come.

“I also checked with the apartment owners association. They confirmed that the old blocks had received OC but the new ones had not. When I asked why they had taken over these new blocks that didn’t have OC from the Builder, they brushed aside my concern stating that this was the normal process and OC would eventually come,” says Arathi.Soon after, the apartment owners association sent out invoices asking owners to pay for the maintenance. Arathi asked, “Why would we pay maintenance for a building that is legally not occupiable?”

After months of communication with the Builder went in vain, Arathi issued a notice to the Builder, informing them that they would need to pay the maintenance and electricity bills for the flat till the time OC was received, failing which further appropriate action would need to be taken.

“We got a reply from the builder in which they insisted they had done nothing wrong. They said we were the only ones out of hundreds of home buyers coming out with frivolous complaints. They literally threatened us of the consequences if we did anything further. We later discovered that at the time of handover, even the Fire NOC had not been received, without which the builder could not have applied for OC,” she adds.

On May 15, 2015, Arathi lodged a complaint with the Consumer Redressal Forum.

What is an OC? Why is it important for a buyer?

The Occupancy Certificate is a document issued by a statutory authority (such as BBMP and BDA in Bangalore). Simply put, this means that the builder, on completion of the building, needs to apply for an OC. If the building has been built as per the sanctioned plan, and fulfils other legal requirements, the authority shall issue the OC within 30 days.

Without OC, the building is technically unfit for occupation. Hence in the event of any accident, the occupants / users of the building can hold no one liable and would not be eligible for any insurance or compensation claims. Water, sanitary and electricity connections, if already obtained, are liable to get disconnected. Khata for the flat will not be issued unless the building has the OC. The flat also cannot be sold without the OC.

Builders, even those considered reliable, choose to override this clause as there is monetary gain to them here on several counts.

Further, there are many buyers who, setting aside statutory requirements, put pressure on the Builders as they want to move into their flats quickly due to various reasons. Hence in the flow chart of the Builders, providing the OC appears at the very end.

Order comes in too late, but relevant for all

The Order from the Consumer Redressal Forum came three years after the complaint was lodged. It affirmed that the Complainant had proved the Builder’s deficiency of service and was eligible for compensation. The Builder was ordered to reimburse the electricity and maintenance bills for the period from apartment handover to receiving the OC. The Builder was also ordered to issue a fresh maintenance warranty, for a year from 1st January 2015, the date after receipt of the OC. 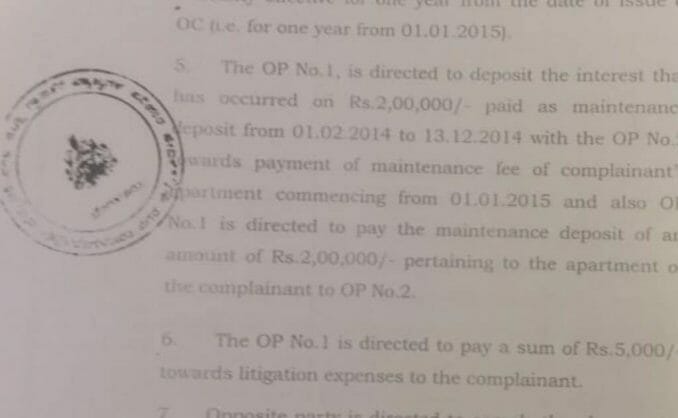 The compensation provided to the Complainant was no more than the actuals. And the period of extended Warranty given ended long before the date of the Order.

Yet the victory is highly significant because it has set an important precedent. It has sent out a strong message to all builders and promoters that they may not get away with any violations.

“This order only flags an existing clause and does not give any new protection to the buyer. It is entirely up to the buyer to be knowledgeable and aware of his rights. On the limited issue of OC, my advice to all Home Buyers is this,” says Arathi.

More importantly, the case has highlighted the importance of Occupancy Certificate. Most home buyers, with no prior experience in such matters, blindly trust the reputation of the builder and the project. With hundreds of people investing in the project, everyone assumes that some buyer, with experience in legal matters, would take care of the common interests. That no one does is a wakeup call!

“I don’t see it as a personal victory, just delivery of justice to the common citizen. Also, it was not a fight against one particular builder. I came by a clear violation of what I perceived as an important rule and fought for the rights of all unsuspecting buyers of homes. I am pleased because this ruling has a set an important precedent,” says Arathi.

What is the take away in this for home buyers?

Homebuyers, shelling out a big chunk of their savings, should be aware of the builder/ promoter obligations. And if they see any missing document in the checklist, they must approach the Builder. Seeking assistance from the Consumer Court is the last resort.

“The Occupancy Certificate, to a large extent, is a pointer to the reliability of a builder. Check the builder’s previous projects. Ask to see OCs of those projects. If OCs have not been issued, stay away from the Builder/ Promoter,” advises Arathi.

“Even in case of reputed builders, as you are shelling out savings of a lifetime, you must ensure that the name change and transfer of electric meter and the start of Warranty happens only after the arrival of the OC,” says Arathi.

This means that one should not take possession or have the apartment registered without the Occupancy Certificate. Sometimes, builders provide a self-certification of completion done by an architect. Buyers must not fall for this – they must insist on the official government OC.

Only an official OC given on completion of the building is a proof that the building has been constructed as per the sanctioned plan. Otherwise one risks having the home/ building demolished when the illegality comes to light.

Taking cognisance of the Consumer Redressal Forum’s order, the Builder has been quick to respond and has already paid up.

“This ruling has made it clear to all builders-promoters, however big, that they shall adhere to every single clause and follow the law as laid down by the concerned statutory bodies, in letter and in spirit. It is now for the buyers to be aware of their rights in this matter,” she adds.

The hike in the annual Consent for Operation fee is arbitrary and, worse, could discourage people from treating their sewage. It is especially unfair to law-abiding citizens.

Here’s where you can get air quality data for Bengaluru

Bengaluru’s air quality has been worsening over the years. But there are also a number of eager beavers trying to track air pollutants and find solutions.

With the increasing number of women coming in search of work from outside Bangalore, the cases of eve teasing and sexual harassment are on a high.