The Karnataka Composting Development Corporation (KCDC) has decided to serve a notice to Terra Firma Biotechnologies Pvt Ltd, on cancellation of the agreement for supplying vermicompost, after the issue of garbage being sold as vermicompost came into light.

A citizen and a Karnataka State Pollution Control Board (KSPCB) official spotted garbage being burnt in a site near Sarjapur Road in Bengaluru, at Choodasandra in Chikkanayakanahalli area. They were shocked to see that the sieved fine garbage powder was being filled into bags labelled ‘vermicompost’ with the name of KCDC on it.

Citizen Matters had carried an exclusive story on this on May 28th, 2015. With the photos and inputs from the concerned citizen, Citizen Matters put together the story after confirming the basic details.

After a few citizens alerted the KCDC on bags labelled ‘vermicompost’ being filled with burnt and sieved garbage, the KCDC held an emergency meeting, in which the decision to serve a notice to Terra Firma was reportedly taken.

However, the KCDC officials said they were not able to locate the place where the illegal activity took place. In the entire episode, the KCDC and the private firm (Terra Firma) under whose names the composting process was being carried out at Choodasandra, refused to associate themselves with this particular unit. In a surprising move, the KCDC took the decision to serve the notice to the firm.

Though the firm / person who operates the unit could not be established yet, as Citizen Matters dug deep into the matter, lesser-known facts emerged about this business of manufacturing and selling vermicompost.

As the ‘vermicompost’ bags produced at Choodasandra bear the name of Karnataka Compost Development Corporation (KCDC), Citizen Matters paid a visit to KCDC. In the vermicomposting area, we were able to take a picture of a ready-to-sell bag filled with vermicompost. 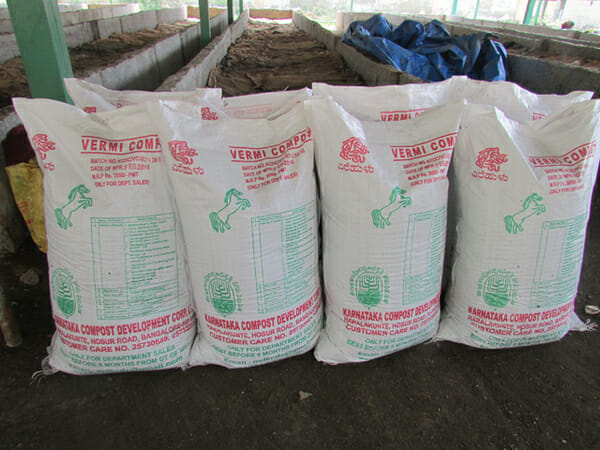 Vermicompost bags arranged for supply at KCDC unit at Somasundarapalya in Bengaluru. The bags and the text are similar to what was seen at the site of garbage burning, in the story that Citizen Matters broke. Pic: Akshatha M

Citizen Matters found that the design of the bag and the text on it are the same as what was seen at the garbage-burning site, which could be seen by clicking here.

KCDC does undertake genuine vermicomposting, and sells composting worms to the interested organic gardeners too. Read this to know the story of how KCDC started vermicomposting.

There are many gardeners from Organic Terrace Gardening group, who have bought vermicompost from KCDC, but the experience with the quality seems to be different for different people, with many of them claiming that the quality was poor.

‘Complaint on the quality of compost led to notice’

We also spoke to KCDC Chairman Dr Anand Kumar for clarification. The Chairman rejected KCDC’s connection with the illegal unit mentioned in Citizen Matters story. He said the Corporation used to purchase three types of composts, namely, city compost, vermicompost and granulated organic manure (branded as Agrigold) from private firms including Terra Firma, that have won the tender.

“But, now we have stopped buying compost from private agencies except for Terra Firma. I was not aware of the garbage being labelled as vermicompost in an open ground in Choodasandra,” he said.

Interestingly, he said that due to repeated complaints from farmers who buy the compost, about the poor quality of city compost and vermicompost procured from Terra Firma, he has decided to cancel the tender agreement between KCDC and Terra Firma.

“I have directed the KCDC Managing Director to cancel the tender agreement between the Corporation and the firm immediately. We do not want to supply poor quality of compost to the farmers. Hence, we have decided not to purchase compost from private firms in future, but to sell the compost that is produced only in KCDC unit,” the Chairman assured.

When asked KCDC Managing Director In-charge L N Belavanki about serving notice to Terra Firma, he said he will surely serve the notice within two days. May 30th 2015 is the last working day of Belavanki at office as he will be retired from service. 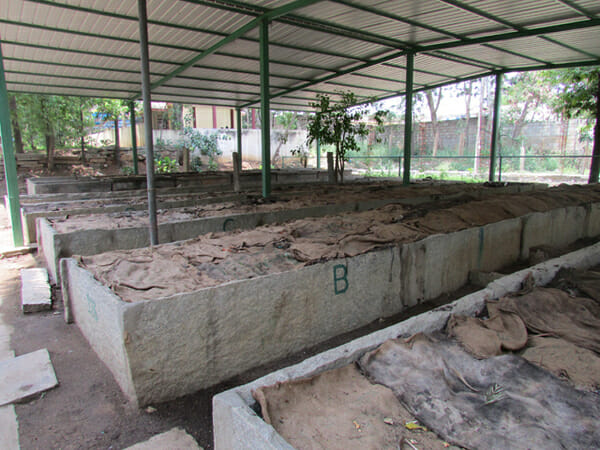 Citizen Matters asked KCDC Advisor Venkoji Rao why the Compost Development Corporation was purchasing compost from private firms. He said it was with an intention to help private firms to market the product as well as to make the compost business profitable to KCDC.

“Often the compost produced in private waste processing units is not easily sold in the market. KCDC too can not really make profit by selling compost in a small quantity. We get bulk orders from the agricultural department and other organisations which can be met only if we collaborate with private agencies that manufacture compost,” he said.

KCDC profits soar high, after tie up with private parties

An inside source who did not want to be named said that, according to the agreement between the KCDC and private agencies, KCDC provides bags bearing its name to private agencies whenever there is bulk demand for compost from buyers. Private firms fill the compost in ready-made bags and transport it directly to the buyers.

It works on a pure contract basis where KCDC does not interfere in the transaction. If the market value of vermicompost is Rs 3,850 per tonne, KCDC pays Rs 3,600 to private firm, which means the KCDC has a profit margin of Rs 250 per tonne.

Further, the source said that the agreement with private parties has made the compost business profitable to the Corporation. “Compost produced and sold by KCDC alone does not bring us much profit as the cost of manufacturing and expense incurred here is high when compared to that of private firms. Three years ago, before entering into agreements with private parties, our annual turnover used to be around Rs 2 crore. Whereas, since three years, our monthly turnover in composting has crossed Rs 2 crore,” said the source.

Incidentally, the financial report put up on the KCDC website shows a clear profit of Rs 187.72 lakhs, that is Rs 1.88 crore per year, which is an all-time high figure in the history of KCDC.

No quality testing of the manure

However, according to the source, no new tenders were called for supplying compost in last six months, after Anand Kumar took charge as the Chairman. “He is not keen on tendering the compost supply and restrained from involving private agencies in the process, except for the manufacture and sale of Agrigold. As the validity of tender agreement with Terra Firma was not expired, the tender continued till now,” revealed the source.

What is missing in the entire process is the quality testing of compost sold by private agencies under KCDC banner. To a query on whether KCDC conducts chemical tests for quality assessment of the compost sent to them by private firms, Venkoji Rao replied in negative.

“We conduct quality testing of the compost produced in KCDC unit. As far as the compost sold by private firms in KCDC bags is concerned, no quality testing is done as the bags are directly sold by the private parties to the consumers. We do the testing only if we receive complaint from farmers. So far we have not received any formal complaint,” he said.

The company that is at the centre of this controversy, Terra Firma Biotechnologies Ltd, has distanced itself from the issue. Terra Firma Biotechnologies Ltd is a private firm that has been given BBMP contract for processing and disposing solid waste generated in the city. Terra Firma Managing Director Dr R Ganesh said that his firm has nothing to do with the unit and he would file a police complaint against the unit owner/whoever it is for maligning the image of his firm by taking its name.

“Our firm has only two waste processing units—one at Doddaballapur and another one at Bilekahalli on Bannerghatta Road. The company has a contract with BBMP to process the collected waste at authorised processing units. I am not aware of any of our unit functioning on Sarjapur road. It appears like an attempt to malign the image my firm,” he said, while demanding that the concerned officials probe into the matter.

According to him, apart from producing, vermicompost in their own unit on Bannerghatta Road, Terra Firma also purchases compost from other small firms and farmers. “We have also been selling the product to KCDC, Agriculture Department and Horticulture Department as per the contract agreement with them,” the MD said.

Claiming that his company has secured the tender among tens of companies for quoting lowest bid and for supplying quality compost on time, he refuted the allegations made by KCDC about the low quality compost supplied by Terra Firma.

“If not for the quality, how can our products have demand in market?” he asked. On the claims of KCDC Chairman’s decision to cancel the tender, Dr Ganesh said he is not aware of it. “I have not received official communication in this regard.”

However, at one point he agreed that there is not really a great demand for vermicompost from farming community. “They do not buy until and unless it is sold for a subsidised price, due to which our products are sold to the Agriculture Department.”

During the conversation he also expressed his helplessness to manage the waste that Terra Firma unit has been receiving in bulk. “The capacity of SWM unit at Doddaballapur is 500 tonnes per day, whereas we have been overloaded with 1,500 tonnes of garbage everyday. Despite repeated requests to the BBMP not to overload the unit, BBMP has not listened to us,” he said.

The episode has raised several questions on the quality of compost sold by KCDC, subcontracting the supply of vermicompost and the question of accountability.

KSPCB could not establish the name and connection

Strangely enough, Karnataka State Pollution Control Board (KSPCB) too so far could not establish the organisation / person who runs the garbage composting site.

KSPCB Deputy Environmental Officer H K Lokesh who has inspected the site said that there is no proof to conclude that the unit is operated by Terra Firma or KCDC.

“No board has been displayed at the site naming the unit. When we asked the workers they said they were working for Terra Firma, based on which we assume that it belongs to the same firm. KSPCB head office has directed the regional office to carry out an inspection and find out who is behind the mess,” he said.

In the wake of the High Court direction to the government to hand over Karnataka Compost Development Corporation operations to BBMP, Palike too now has an equal responsibility of belling the cat.

When Citizen Matters brought the issue to the notice of BBMP Administrator T M Vijay Bhaskar on Thursday, he said that he will look into the matter. When he was contacted again on Friday, he said he has directed an official from BBMP to conduct a spot inspection.

Can of worms opens up after govt composting firm sells garbage as vermicompost
MLA backs citizens protesting against KCDC
Will the KCDC neighbourhood finally be free of smelly nights?
How is wet waste processed at the KCDC?
Karnataka composting firm back in the limelight
The story of the first composting plant in Bengaluru
Millions of workers who did not demand wage!

‘We are not criminals’

The police and the residents want the domestic workers to be profiled to security reasons. Domestic workers are protesting the move. What is the need for this profiling?

Women of a lesser society

Just 17 kms away from Bangalore’s southwestern suburbs is a world where women die during childbirth and parents pull girls out of school just as they used to do decades ago.