Send it back to where it came from… after it has been thoroughly segregated and composted, of course. We’re talking about sending the biomass part of the waste a city generates back to the soil. This would ensure the recycling of nutrients, creating closed economies as is the need of the hour, and virtually trigger off a positive domino effect.

It remains a fact that we are a country with a rich history of recycling, the returning of nutrients in the way that the Karnataka State Agriculture Department is proposing plays to that history. The department has proposed that the BBMP create decentralised pickup points for compost. Compost will then be collected and provided as organic fertiliser to farming communities around the city. While this is not a novel idea, despite its challenges, is the best idea in the toolbox.

When that happens, if it does, a range of things will happen. Roughly, 50-60 per cent of the Bangalore’s guestimated garbage, which is on average 5-6,000 tonnes a day, can be converted to compost and returned to the soil. That should comprise essentially kitchen and garden waste at the household level to leftovers from restaurants, fruit and vegetable markets, apartments and other bulk waste generators (BWGs).

Citizens and groups like the Solid Waste Management Round Table (SWMRT) have been breaking their back to push both citizenry and local administration on the segregation and composting front. This attempt from the Agriculture Department could push the momentum built over the years over the edge. The city will also have to work out a clear incentivisation process to segregate given that empty or almost token threats of fines don’t work. Sweden for instance charges taxes to dump into a landfill. Closer home, Pune provides a bit of a relief on property tax while parts of Kerala have decided not to collect unsegregated waste. The result, residents are forced to do so in a matter of days. 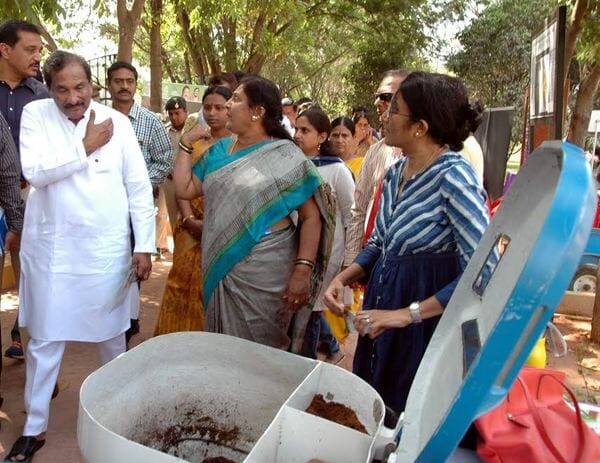 Compost Santhe conducted by BBMP is a unique initiative to promote composting in neighbourhoods.

Strategy to deal with the compost is important

One also needs to acknowledge the number of BWGs who are already segregating and composting at their own level as they have been mandated to, but are struggling to deal with the compost generated. Given that there is no real solution to dealing with this compost, the proposal comes at a good time and with a clear, desirable conclusion.

Between the BBMP and the Agriculture Department, they could identify the BWGs, who create at least 50 percent of the city’s total waste if not more, to get started. What both the departments need to be absolutely mindful of in order to ensure this fantastic exercise does not fall flat on its face and is therefore abandoned, is to ensure compost quality check. Compost quality standards, which are not standard at the moment, need to be in place to begin with and all the compost needs to be checked against set standards before it is considered for agriculture in particular.

Segregators at source on their part need to ensure food and leaves or garden waste is the only thing their compost is comprised of. No medicines, no plastic covers – not even corners of milk packets or the stickers from fruits, and definitely none of the other non degradables or inerts. What goes into the compost, remember, goes back into our food system.

This proposal should also include separately the seasonal dry leaves, which are currently being burnt, aggravating the air quality. Or these can be composted separately in the way the Resident Welfare Association of Koramangala 3rd Block is going about it, composting and selling it.

Another 30-35 percent would be dry waste – bottles, plastic, cans, electronic waste etc. that can be retrieved and recycled instead of being put through the digestion process, which leaves us with a really small quantity (five to seven percent) of inert material that needs to be sent to landfill. It would facilitate not only the reduction of garbage but also communicable diseases. We will significantly reduce the pressure on landfills – which are only likely to grow if we continue in a business-as-usual scenario. And as a result landfill-affected communities. At the moment guesstimates of India’s garbage production are anywhere between 48-80,000 tonnes, growing at an accelerated rate. Unless we change our ways pretty soon, we are bound to buckle under our own filth much like the dreary scenario presented in the well-known animated movie, Wall-E.

If we ensure segregation at source, it can still serve as a means to earn for the the pourakamrikas and the raddiwalas (traditional recyclers) who can make most of the dry waste segregated at source rather than scavenging for leftovers from people’s rubbish in the way ragpickers are forced to. The socio-economic condition of these communities can improve significantly. All these communities need to be brought into the fold and incentivised if this effort is to be made a real success.

Coming back to compost, let’s remind ourselves again. The city produces roughly 5-6,000 tonnes of waste a day. Over half of that is putrescible material. If that is composted it reduces to a third of its original quantity, so that would be approximately 800-1,000 tonnes of compost a day! And if one adds festival days, the average will undoubtedly go up.

Compost, and good quality compost at that can serve as excellent fertiliser. It returns the leftover nutrients that were brought through food. When nutrients are returned to the soil, soil becomes healthier again. Nutrient recycling helps reduce dependence on agro-chemicals such as chemical fertilisers and pesticides, simply because plants growing in healthier soils are stronger and more resilient to pest-attacks, diseases much like the human body that needs medication only when the immunity and therefore capacity to fight off drops. This would not only reduce the agro-chemical budget and burden on the country, but reduce input costs for farmers and the consumer, make the food safer! And do so using a more holistic approach that will make the city a direct contributor to Sustainable Agriculture.

About Shivani Shah 3 Articles
The author has not yet added any personal or biographical info to her or his author profile.

Coded discrimination, disproportionately affecting women and people from marginalised castes and classes, is a key feature of the contract labour system.