A clean up drive turned out to be a wake up drive, for shop keepers as well as BBMP, on Saturday, November 23, 2013 . As many as 26 shops at Johnson’s market received notices for not having trade licenses  or for not displaying it. 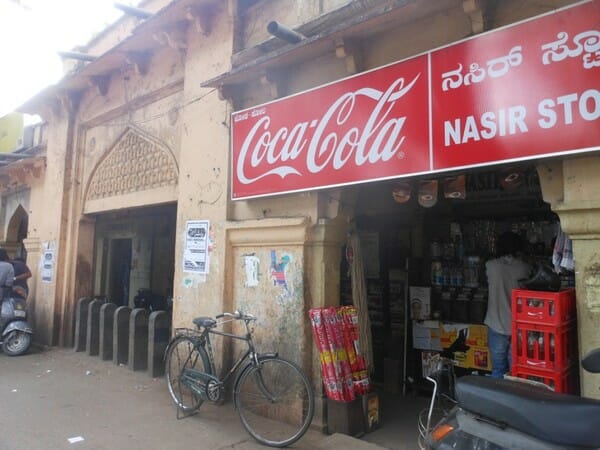 There are many vendors in Johnson’s Market who violate the rules. Pic: Nikita Malusare

As you enter Johnson market from the main entrance, the darkness of the alley stops you from heading further. But a daily visitor easily marches on. There are no shops existing inside the alley as they are shut down and the space is taken over by spiders.  The metal criss cross doors enables anyone to see through them.

Barely six vegetable vendors sit in the alley with their own connection from BESCOM. No lessons are learned from Russell market as it has no fire safety provisions. The market continues to be neglected. However, on March 28, 2012, BBMP pledged this market along with Malleshwaram market and Dasappa building with HUDCO to take a loan of Rs. 256.53 crores.

Johnsons market is not very big. Constructed with Islamic style of architecture, it is a host to 78 shops, allspread over the ground floor. On the eventful Saturday at 10 am, when shops opened their shutters, they were asked to show their trade license. 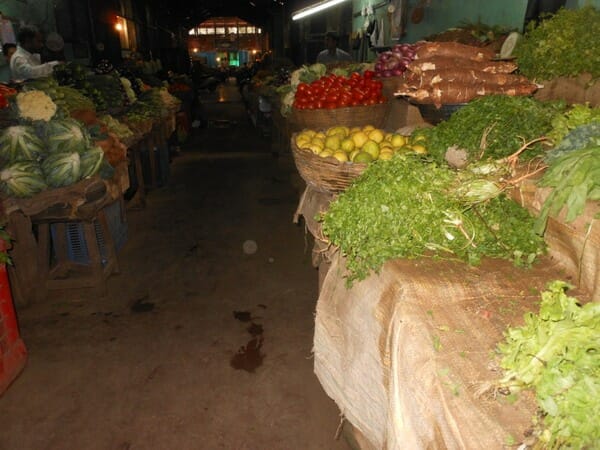 No scope for much cleaning!

The officers had actually assembled for the clean up drive arranged by BBMP Mayor, B S Satyanarayana. Students of St. Joseph’s college were supposed to clean the market.

However, before the clean-up drive could even start, pourakarmikas had already completed their daily chores and kept the market spick and span. None of the shopkeepers had  any complaints about the work that pourakarmikas do every day.

Johnsons vegetable market remains clean most of the time primarily because there are not many vegetable shops here, which call for the need to have extensive cleaning. Unlike K R Market, Johnson’s market does not receive truck full of vegetables that leave waste on the road.

Shops at Johnson market are owned by BBMP. There are different types of shops here, like small hotels and bakery. The market has shops of grocery, stationery products, internet café, vegetable products and slaughter house for chicken, mutton and fish.

Petty eatery shops were inspected for hygiene and cleanliness maintained inside the kitchen. Expiry  dates of the  packed food products in the hotels and grocery stores were inspected. 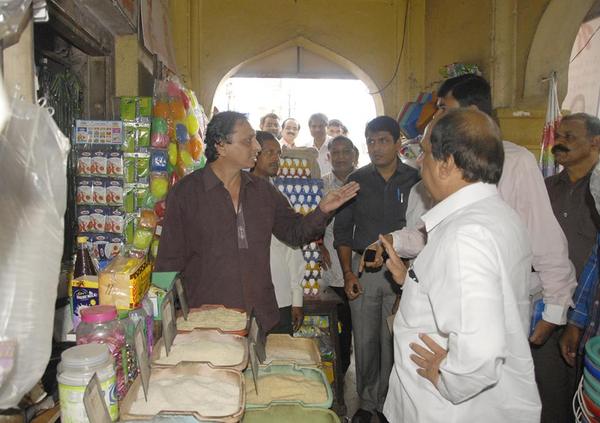 A trader being take to task by BBMP officials during Johnson’s Market inspection. Pic: Nikita Malusare

Mayor irked over lack of licences

Mayor noted the cleanliness maintained in the market and appreciated the job of civic workers. However, the Mayor and the Additional Commissioner were unhappy with some shopkeepers and officials, over  the lack of  trade license.

“Senior inspectors are not doing their job properly. 95% of the shops here do not have trade license,” the Mayor said. He added that the rent of these shops is less Rs. 100 or Rs. 150 every month.

He added that he will ask the Commissioner to increase their rent. He warned the shopkeepers that if the shops do not obtain the trade license, he will seek police help and forcibly shut down the shops.

Mayor told the Health Inspectors to keep a vigilant check on the slaughter house as he noted that one of them sold rotten meat. He said, “If people will eat  such meat they might die and the blame will come on BBMP. To top it all that shop didn’t have  trade license too.” (Citizen Matters could not verify whether they indeed sold rotten meat.)

Mayor ordered all shopkeepers to obtain trade license at the earliest. A BBMP officer comes once in a month or  after several months, to collect rent from the shop keepers. There is no fixed date, said Usman Khan.

Some shoppers too are at fault

It is a common practice by the owners of shops in almost all BBMP-owned markets, to sub-let the shops to another person, to make some money.

AC Kumar said, “Trade license is compulsory for all the shopkeepers to carry out their trade. Out of all the shops at Johnson’s market, hardly 10% have trade license. At the same time mutton, chicken and fish shops are also supposed to take license from animal husbandry section of BBMP. Nearly 60% of them don’t have the license.”

Though Johnson’s market has 78 shops, 39 shops are under health department and the rest 39 are under animal husbandry,  only half of them are in working condition. 26 notices were  issued to the shopkeepers  and a total fine of Rs. 14, 500  was imposed.

In order to safeguard public’s health, Suvarna Arogya Paravanige (SAP) scheme, has been chalked out in 2007. It mandated BBMP’s Health Department to keep an eye on the trade listed under the Schedule X of the Karnataka Municipal Corporation Act 1976 for public health safety. Health officers are expected to check trade licenses, hygiene and sanitation maintained by the shopkeepers  every month.

Inspite of having trade license, shops that failed to display it were fined Rs. 1000/-, while those shops that did not have trade license were immediately given application form to apply for it.

Kumar promised to give these shops trade license, he said, “We will make attempts to regularise them. We will see to it that they are given licenses within a week.”

Grocery shopkeeper argued that the customers ask plastic bag for carrying  two small eggs he said, “Customers demand for plastic bag therefore we have to give them.” In  angry tone he asked, “Why doesn’t BBMP ban the plastic manufacturers itself?”

Usman Khan, who owns a stationery shop turned irritated, when he received a fine of Rs. 15,000/- Some shopkeepers were fined Rs. 500 while few others were fined Rs. 1,000 to 5,000 for various reasons like not displaying trade license, for encroaching walking pathway etc.

However, on enquiring,  Medical Officer Sanghamitra said: “That person was not the owner of the shop, he was a third party. At the time of inspection he was supposed to present MoU between him and the shop owner, which he failed to present.” As he had refused to accept the fine notice, now it will be sent to him via speed post.

No money to pay

Shopkeepers are ready to apply for the trade license but are unsure about the fines, as they believe that there was no proper procedure in imposing it. “We all will come together and have a word with the BBMP, to decide to pay a single  amount as fine,” said Usman Khan.

Muhammad Siddhail Khan, owner of a departmental store, was fined for keeping a few of his products outside his shop. He said: “If I don’t keep items out for display no one will come. My shop is small and has very little space for all the products.”

There are plans to build a market complex of two floors in the next six months, where the old structure stands. However, the shopkeepers said that the plan is too old which they have been hearing about it for years now.

Usman Khan said such visit takes place only once in a blue moon. He said, “Today just because of Mayor they have come. Otherwise nobody comes here. Look at the condition of the market. How long it’s been painted.”

‘Visual impairment is not an obstacle to play chess’

The national level championship drew enthusiastic reponse from visually challenged players from across the country.

BBMP uploads all pending bills online for public scrutiny. A political party gets into inspecting the bills. The result: Derailing of debate on social audits of public projects. Here’s the full story of AAP’s social audit controversy.

Though other cities had a higher turn out, in Bangalore fewer people participated in India Against Corruption rally on Sunday.