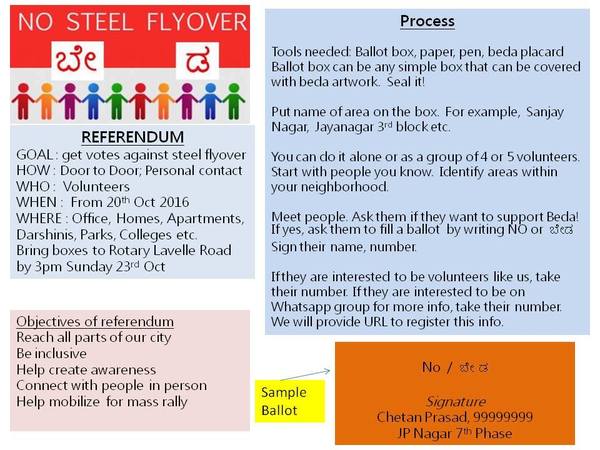 We have heard the CM of Karnataka and are disappointed with his response. However that doesn’t change what was seen, heard and felt by thousands  on the road on Sunday – #SteelFlyoverBeda.

There are thousands who are against this flyover – old and young who lined the streets in the Human Chain on Sunday, Oct 16.

The 219 people or 73% of 299 responses does NOT represent the public sentiment evident on the roads yesterday. It is strange that our Chief Minister is quoting a ridiculous figure that BDA hides behind when thousands of people have openly opposing the project. At this point there are online petitions with over 24000 signatures saying NO Steel Flyover.

We are opposed to the Steel Flyover and the only acceptable solution is the tender must be withdrawn and project canceled.

Caring citizens have been asking what our response should be to the CM’s adamant stance on the controversial, anti-people, anti-environmental and strangely expensive flyover project.

We are saying, clearly, “NO. Bedave beda.” And we have agreed on a programme of action.

The small group of people who formed CASFo – Citizens Against the Steel Flyover – humbly acknowledge, after Sunday’s spectacular demonstration by caring citizens, that this effort has graduated from citizen activism to a citizens’ movement.

We are no longer a small forum, but representatives of the larger public will. Clearly, we have greater support on our side than the CM’s claim of 219 backers of the flyover project.

Here is our action plan:

1. Mass rally: Evidently, while 219 is a persuasive number for the CM, the 8,000+ that made the Human Chain on Sunday is not. We will organise a mass rally to make the CM see how upset the general public is with this project proposal.

2. Consultation: 11AM Sunday 23rd Oct 2016. Rotary House, Lavelle Road : A panel of experts will speak on the lack of due process and application in the strategy and design of the flyover project and in the preparing of the Detailed Project Report. For registration, email to winbackindia@gmail.com with subject: Register for consultation

3. Referendum: A public poll will be held with sealed polling boxes across the city. Citizens can vote with ‘No-ಬೇಡ’ or ‘Yes – ಬೇಕು’, write their name, telephone no. on a slip and drop it into the polling box. The boxes will be opened at the Rotary Auditorium on Sunday at the end of the consultation.

4. Tree vigil: Citizen volunteers will begin a regular all-night vigil on the stretch between Hebbal flyover and Basaveshwara Circle to ensure that contractors don’t chop down any tree while the city sleeps. Starting Nov.1, Karnataka Rajyotsava

5. Petition to the National Green Tribunal We invite caring citizens to sign up for a petition to be filed before NGT by paying Rs 100/- not a rupee more, not a rupee less, so that the petition represents the widest public interest. Those who sign up, can email winbackindia@gmail.com with subject: NGT Petition – so that our volunteers can collect your name, profession, signature and photograph in a leather-bound book that will one day become a memorable part of the history of Bengaluru.

The content has been taken from the press notes sent by Citizens for Bengaluru team.

Entire Bengaluru stared with awe at the encroachment clearance drive that took place on Sarakki lake bed sometime ago. What is the status now? A citizen shares the latest update, along with insider’s view.