The State government is likely to face the wrath of the judiciary, having made visible changes in violation of the Karnataka High Court order while amending zonal regulations in Revised Master Plan, 2015.

The Citizen Action Forum (CAF) which has been fighting against commercialisation in residential areas, has filed a contempt petition in the High Court against the government for not abiding by the affidavit submitted by the Bangalore Development Authority (BDA) promising to curb commercialisation in residential areas. The case is likely to come for hearing in the court next week. 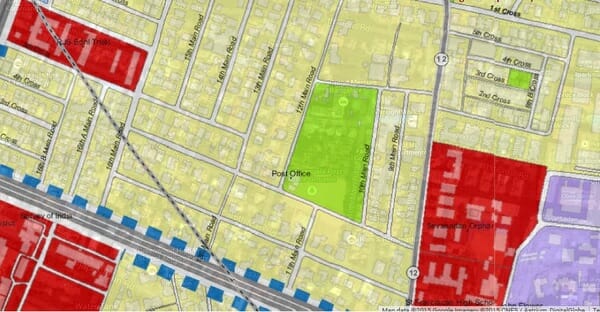 Land use classification by the BDA is often violated by the BDA itself. Pic: Clearvalue.in

Earlier, the CAF and few other civic groups in Bengaluru had filed a Public Interest Litigation (PIL) in the High Court challenging the Draft Revised Master Plan BDA – 2015, prepared by the BDA that permitted commercial use of residential areas, through a land use category called “mixed residential.” The High Court in its order dated February 19, 2014 directed the State government to amend the land use rules of the BDA’s Revised Master Plan to allow only the ancillary use of residential properties in selected areas, based on the affidavit submitted by the BDA.

The BDA in its affidavit submitted to the High Court, declared of modifying the RMP. In its undertaking it declared that:

Now, the BDA has violated its own undertaking by twisting the rules. According to the final notification (gazette notification) published by the Urban Development Secretariat dated December 11, 2014, changes have been made in the regulations with blatant violation of the Court order. Interestingly, the regulation considers even IT, BT, BPOs, educational institutions, multi-speciality hospitals under the ancillary category.

In addition, in Amendment Chapter 4 of the Regulation, the government has allowed for converting ancillary as main use in Ring 2 residential areas. It states: “In Ring 2, if the plot size is more than 1,000 sq. m having a frontage of 10 m or more and abutting road is more than 18 m width, then ancillary uses can be used as main use.” This simply translates into allowing ancillary in wider scale in a major land holding within residential area.

In BDA’s affidavit, this particular clause was applicable to only those residential areas falling in Ring 3. But, in the revised regulation, the clause has been made applicable to Ring 2 residential zones too. Though it can be argued that no major establishment can operate in 1000 sq. m area, it is in fact possible, if a few sites are amalgamated to create a larger property which can pave way for commercial establishment.

In the Draft Revised Master Plan BDA- 2015 (prior to the amendment), the plot size for converting ancillary uses as main use was fixed at 240 sq. m which has been now increased to 1,000 sq m.

Yet another small change has been intelligently made while fixing the road width for commercialisation in residential areas. While the BDA’s affidavit stated no commercial activities will be allowed in residential main and residential mixed zone with a road width 40 ft and less, in the amendment the ceiling has been converted into metres. Accordingly, no commercial activity will be allowed on roads with or less than 12 m width which is 39.37 ft. This leaves a gap of 6 inches between the accepted width for commercialisation.

Speaking to Citizen Matters, Citizen’s Action Forum Secretary Mahalakshmi Parthasarathy flayed the government for amending the regulation at the behest of builder lobby. “We do understand the need for allowing ancillary units like barber shop, grocery shop etc in residential areas. That doesn’t mean residential areas should also accommodate commercial establishments like IT companies, multi-speciality hospitals and colleges. The government has formed the regulations in such a way so as to help small and middle-level builders,” she said.

She also alleged the BDA of tweaking the rules following a confidential meeting with the members of Confederation of Real Estate Developers’ Associations of India (CREDAI). Since the meeting minutes is not available with CAF, Citizen Matters is waiting for the copy of RTI reply from Urban Development Department.

When Citizen Matters tried to contact BDA Commissioner Shyam Bhat he was not available for comments.

A gesture of appreciation for the BBMP Pourakarmikas

A meeting with prime minister Manmohan Singh on 8 May was somehow billed as a non-partisan ‘citizens meet’, with the promise of interaction. Instead, the opposite happened.