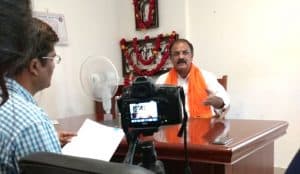 Never before in the history of Bengaluru (or even other Indian cities), have we heard of non-partisan groups of citizens reaching out to all their candidates, preparing a bunch of hard questions, and interviewing each candidate on video, and working to share the video with all voters in their constituency so each one of them can make the most informed choice.

Mahadevapura’s Million Voter Rising (MVR) team has been working from late 2016 to enroll voters in their constituency. They went to court filing a PIL when they found irregularities in the enrollment process and protested when majority (more than 60%) of registrations got rejected. The initiative helped push the voter registration officers and revenue inspectors to follow the established process.

The team struggled against not only citizen apathy but also active discouragement from officials and managed to get tens of thousands of people registered. They have now taken the next step, helping reach the right information to voters and urging voters to turn up on election day.

The team comprised of volunteers across the eight wards of Mahadevapura, are interviewing the incumbent MLA and the candidates and recording them on video for the benefit of their fellow residents.

The interview questions were well-thought out, based on a genuine understanding of the role of MLAs, as well as observations on the ground of what the sitting MLA/candidates have been doing. Sample these questions asked by the team: What is your commitment to the functioning of ward committees? How did you decide on the priority of your MLA LAD fund expenditure? What can you commit to, in first three months if you are elected? 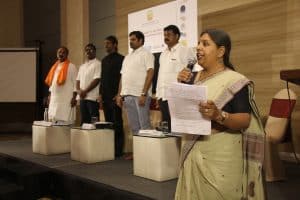 After the individual interviews, they got the five candidates together in one forum. Moderated by V Ravichandar, the well-known urban expert and Srinivas Reddy, a volunteer from MVR, the Mahadevapura All Candidate Open Forum session saw them facing the 200-strong audience sharing their vision on basic problems of citizens, though mostly civic and specific points on how they plan to execute the action plan.

A few days ago, the Bangalore Apartment Federation had organised a large city level meeting at Chowdiah Memorial Hall in Malleshwaram, with well-known representatives from major parties including KJ George, Ashwath Narayan, Pruthvi Reddy and Tanvir Ahmed. The modus operandi was the same: to describe the problems to all of them, and take commitments from all of them to address it.

A few other citizen groups have been engaging with candidates individually too, meeting them and talking about problems and issues, and getting to know the candidates better, handing them the manifestos.

Political candidates are normally used to walking away after speeches, platitudes and tall promises, but in these structured interactions, they are forced to defend their points. Candidates were not identified by their parties, only as individual aspirants and were told that they cannot get into party politics or blame games. Their language, thought processes and on the spot reactions helped citizens get a sense of the real person behind the politician.

While organisations like the Bengaluru Political Action Committee (BPAC) are also supporting candidate interactions, there is a groundswell of demand from citizens to interact directly with candidates in a free, and civil format.

Manifestos from ground up

While many neighbourhood groups have been engaging with the government over the years, this election season, they have jumped right in, proactively making wish lists and citizen manifestos.

In one interview, sitting MLA of Mahadevapura Arvind Limbavali said: “I even suggested the Home Minister, the Transport Minister to put a condition like they have put in Singapore. If anybody wants to purchase a car, the tax should be more. The cost of the car should be 4 times more than that. Then only traffic will come under control.”

His rival from Congress, A.C. Srinivas has a similar point on his constituency specific manifesto: “Prioritise moving people over vehicles. Hierarchy of road usage is pedestrians, cyclists at the top, followed by public transport, and lastly private transport.”

Sounds familiar? This approach to mobility is exactly what active citizens have been crying themselves hoarse the past many years!

The past decade of citizen activism has resulted in this for sure. Can you imagine any candidate talking about principles of urban planning earlier? Whether they believe in this is a different matter.

While media-organised debates are not unusual, what Bengaluru is witnessing is true democratisation of information. We have got used to national media camping in the city, especially during elections. Even the previous BBMP election drew attention from the national media. This time too, one can see news shows everyday on various channels from India Today to Mirror Now, organising politician-citizen interactions to raise top issues in the city.

Bengaluru has been a hotbed of civic activism for a while now, and with the advent of social media, the activism virus has spread across the city, with many groups focussing on different issues. Earlier elections down south and news from South India hardly got any attention from the Delhi-centric channels, but a whole host of television crews are swarming the city with their live set ups and anchors.

While the national media may not have the local context, they are picking up the cues fed by citizens. Citizen activists are successfully gaining attention for the causes they bat for, and driving the agenda for media too, not only politicians. Loud voices are reaching the nation. Which other city in India has seen something similar in recent past?

These voices are knowledgeable and understand the complexity of issues. They analyse MLAs’ work record and can rip apart the lies of candidates in a minute. They have the capacity to bargain with all candidates and make sure they get they want irrespective of who wins. Isn’t this a new trend in democracy, breaking the barriers of religion, caste, and language-based politics?

While Bengaluru’s Mayor is seen as a powerless figurehead, it is time to change the narrative. We need to believe in the idea of an empowered and visionary mayor who can lead, like in the rest of the world.

The travails of a driver on Mysore Road

Planning a trip out of Bangalore via Mysore road? Look out for the expandable gates and for cops who will fine you if you are driving over the speed limit.

Going back in time

Usha Srinath goes back in time and recalls tales of when her grandmother first came to Bangalore and saw history unfold with the advent of the first motor car and electricity.