The citizens of HSR Layout on Sunday, 7 July 2013, gathered on Agara lake bund, to create awareness on the encroachment of nature, and draw the attention of the authorities towards Agara Lake.

As many as 15 gardeners appointed by the citizens had been working for the last two days clearing weeds and clearing out the floating plastic in the lake. As many as 400 people from all walks of life – young and old, men and women – joined hands to clear the litter on the walking track of the lake. 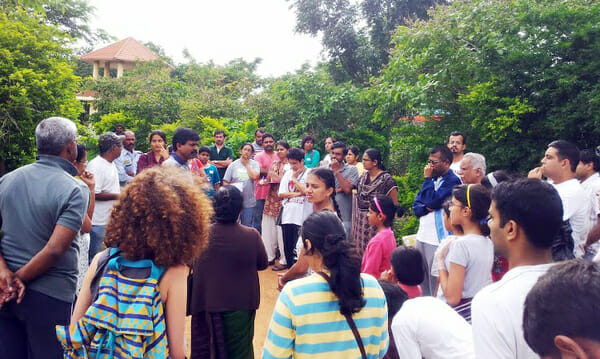 Instructions being given to the first batch of volunteers Pic: Save Agara Lake team

Dr Yellappa Reddy minced no words in stating that both the citizens and government are responsible for the present condition of environment. He said the politician are hand-in glove with real estate barons and builders. Yellappa Reddy’s comparison of lakes as ‘ecological clinics’ for human beings received wide acceptance from the participants.

Sounding emotional, he added: “We have no respect for nature and we have even ignored the Article 51A(g) of the constitution, which states that it is the fundamental duty of the citizen to protect and improve the natural environment including forests, lakes, rivers and wildlife, and to have compassion for living creatures.”

Reddy gave the examples of how several lakes in Karnataka were built/restored/saved by individuals who contributed savings of their lives. “Today Bangalore is short of drinking water. If we continue to abuse and exploit the nature, we will only see the worst,” he cautioned. Dr Yellappa Reddy was categorical that the AT Ramaswamy Report on encroachments has to be taken up by the government seriously and there should be special courts to address encroachments of lakes and other ecological spots.

Munivenkatappa, Retired ACP who is a regular jogger at the Agara Lake and the to-be president of the proposed citizen committee, was quick to point out that it was important for all citizens to join hands, and a person alone cannot make a change. It will take 6-8 months of consistent effort to make the lake more visible and to bring back citizens to enjoy nature, once the lake has more water and more birds will start visiting the lake.” 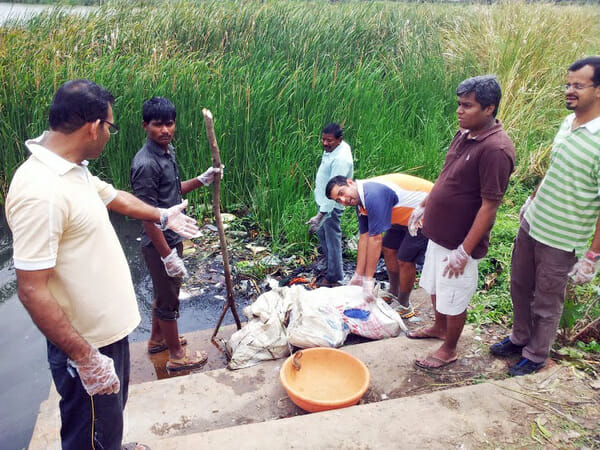 The citizens, armed with the gloves, picked the garbage from the lake and cleared most of the floating garbage. As many as 70 bags of plastic was collected. The dense wild shrubs that have grown over the years that have become abodes of illegal activities were removed to a large extent. Kaushik Mukherjee immediately called the relevant departments. Soon a JCB and a truck arrived, which cleared and carry the debris and the garbage.

Sowjanya and Jenitha spoke about how the lake was once a prime attraction for the residents of Mantri Sarovar few years ago. Today they are scared to even go for a walk along with their children in the evening as anti-social elements are said to frequent the vicinity of the lake.

G Jayakrishnan, one of the organisers of the event said: “It is a first step. We hope to create awareness and build momentum in the days to come. We have received good support so far from the LDA and will work with them to make it more and more effective. We want the BBMP to ensure the rain water reaches the lake.”

Suresh Shetty, a member of the organising team, had been to many apartments to invite them to participate in the walkathon. He says: “One good thing about Agara Lake is that encroachments are not a possibility as the lake is surrounded by roads, at least that ensures the lake size will not reduce any further.”

The citizens had made personal contributions for the clean-up drive, with no support from any elected representative. It was also noticed that the local corporator who was invited by the citizens was absent, clearly showing lack of interest and disregard for the citizen’s initiative.

Bengaluru has been ranked as the second fastest growing start-up ecosystem in the world, but owners of new innovative businesses in the city find the journey far from smooth.

Journey of Joy in Bangalore on June 2

The event is meant to raise funds for underprivileged children, besides inspiring them to run for better health and helping them know more people.