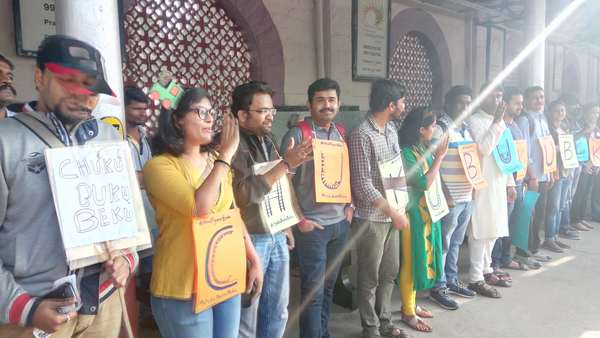 #ChukkuBukkuBeku campaigners line up to board the Bangarpet passenger train at the Cantonment Railway Station on Saturday. Pic: Sumukh Kadekar

Over 300 people assembled at six railway stations between Cantonment station to Whitefield as part of the #ChukuBukkuBeku campaign organised by Citizens for Bengaluru (CfB) on Saturday, (December 17, 2016,) highlighting the need for a suburban railway system in Bangalore to reduce traffic congestion and air pollution.

Several campaigners including actor Prakash Belawadi and singer Raghu Dixit who boarded the Bangarpet passenger train (which was delayed by over an hour) at Cantonment station at around 10.30 am were joined by several students from the Mount Carmel College at the Bangalore East station. The train was greeted by slogans and placards demanding an effective suburban railway network for Bengaluru and emphasising how the introduction of suburban trains would ease traffic flow while providing a time and cost effective mode of transport for commuters. More campaigners boarded the train at each station and finally got down at Whitefield to be greeted by members of Whitefield Rising.

The event attempted to spread awareness about using suburban trains to commute larger distances within the city and at the same time bring to the notice of the government, an alternative transport system that could help ease Bangalore’s traffic problem. CfB’s #SteelFlyoverBeda campaign also found mention in some posters during the event.

“The effectiveness of the suburban train system can be seen in Mumbai, where over 20 lakh commuters depend on it,” Sushmita Dasgupta, one of the supporters of the campaign said.

CfB member Manasi Paresh Kumar said, “The city has become extremely congested. Transport has become a problem. We need to look for alternative options that are there for the city.” She added that not only will suburban trains be faster but it will also reduce the traffic congestion from Bengaluru’s roads and significantly reduce travel costs. 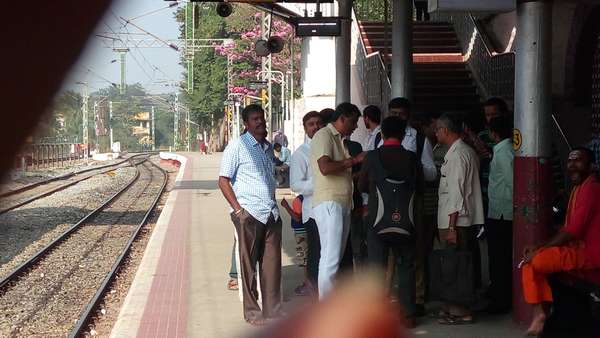 Campaigners spread awareness on the benefits of travelling by suburban trains through placards aboard the Bangarpet passenger near Byapanahalli station. Pic: Sumukh Kadekar

“Even if it costs us (a lot) to build a new railway network, it is still far better than bludgeoning it on a monstrosity like the steel flyover,” said P Gururaj, a resident of Hoodi who travels to Majestic every day where he runs a shop. “It takes me an average of 2 hours,” he said. The existing train system cuts down the travel time from Majestic to Whitefield by more than an hour. “I spend more than three hours in traffic everyday. A train to Bellandur and a walk to my office from there would take me a little over half an hour and that says it all,” said Sheetal, a techie who works at Adobe.

Batting for suburban rail, Prakash Belawadi said that the suburban rail network is a three-decade-old demand. “The demand has been there for the last 33 years,” he said.

“There is already 180 km of track spread across 40 stations,” Muralidhar Rao, President of Praja-RAAG and an active campaigner for suburban trains in Bengaluru pointed out, adding, “developing the existing railway system is the most sustainable and cost effective way of improving transport.”

Bangalore-based musician Raghu Dixit said he is hopeful that the #ChukkuBukkuBeku campaign pressing for a suburban railway network in Bangalore will garner more support in the future. “Today it was 300 people. I hope tomorrow it will be 30,000 and then three lakhs and so on,” he said.

Several banners voicing protests against the proposed steel flyover project, at the sidelines of the #ChukkuBukkuBeku campaign had to be taken off as members of Bangalore Needs You (BNY), a citizen’s movement led by Congress MP MV Rajeev Gowda, who were also present at the campaign, alleged that CfB was using the event to promote their #nosteelflyover campaign.

On the sidelines of the event, CfB members who have been protesting against the Rs 1800-crore steel flyover project tried to assert that the project is a bad decision for the city with other alternatives like suburban trains that could help resolve the traffic congestion problem in a more effective manner and at a lesser expense. 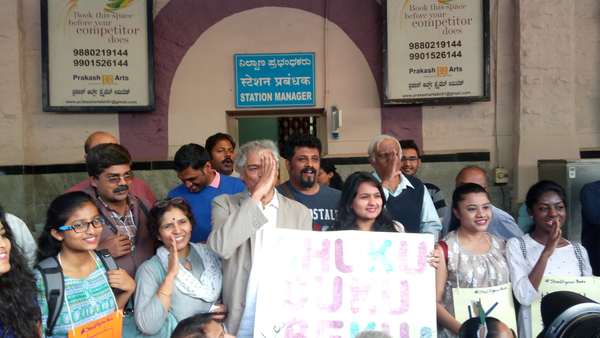 Srinivas Alavilli, one of the founding members of Citizens for Bengaluru, said, “We do not want a steel flyover; there are several other things you can do to decongest traffic. They asked us to propose instead of oppose, so here is the proposal.”

“The steel flyover is a political issue, not a developmental issue. We are here to encourage travel through suburban trains and not to protest against the steel flyover. Both are equally important for Bangalore,” said Raghu Dodderi, one of the few members of BNY who had assembled at the Cantonment railway station.

Musician Raghu Dixit clarified that Saturday’s campaign had nothing to do with the steel flyover issue. “The steel flyover and suburban trains are two completely different issues,” he said.

The matter was soon resolved and the BNY members joined the campaigners in their rail yatra to Whitefield railway station. More passengers and campaigners boarded the train at every stop, asserting more support for the #ChukkuBukkuBeku campaign.

Campaigners believe that spending more money on developing a suburban railway network system is still a better way to tackle the traffic woes of the city. “It is the most cost effective and sustainable mode of transport,” musician Raghu Dixit said.  This comes in the wake of new policy guidelines released in a draft by the Ministry of Railways on December 6th saying that existing tracks cannot be used for suburban railways as it affects the capacity of freight trains and long distance trains.

The draft issued in response to appeals made by several states also says “the institutional structure envisaged for project implementation and operating the suburban rail system is that of a Special Purpose Vehicle (SPV) with equal equity participation from respective state governments and IR.”

Although this may significantly increase the budget for setting up a suburban railway network in Bangalore, #ChukkuBukkuBeku campaigners believe that the utility and effectiveness of suburban trains overshadow the cost factor.

“The demand for a suburban railway system has been there for the last 30 years. With rapid urbanisation and traffic congestion increasing by each passing day, cost should not be a big factor in introducing suburban trains,” Manasi Parash Kumar said. Further, she observed suburban trains will not only save people a lot of time, it will also reduce their travel expenditure significantly. “Through this campaign we are trying to spread awareness among citizens on the benefits of travelling by suburban trains,” she said.

About Arunava Banerjee 2 Articles
The author has not yet added any personal or biographical info to her or his author profile.

The High Court has cleared way for BBMP election, which will be held before July end.