Yes, it has been an exciting weekend. Your own interactive news and analysis website, Citizen Matters, won the Namma Bengaluru Award in media category, at an event organised by Namma Bengaluru Foundation in Freedom Park, on Saturday, March 15th, 2014.

Accepting the award, Citizen Matters co-founder Meera K noted that even though the team was tiny by normal standards of newsmagazines, in reality, it is hundreds of thousands strong, because of direct participation from citizens.

“It is the citizens of Bangalore who share their news, community activities and events, the citizens who send leads for our professional journalists to investigate, and the citizens who contribute to our non-profit public-funded journalism foundation – the Oorvani Foundation. This award is for everyone of you”, she said. 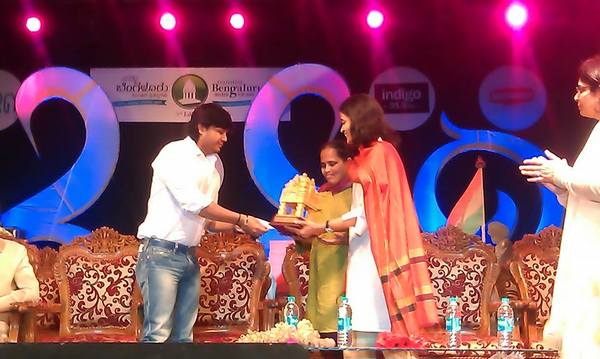 Citizen Matters co-founder Subramaniam Vincent says: “We thanks countless citizens and associations who partner with us on a regular basis with RTI findings, documents, data, articles, insight, alerts and more.” He added that Citizen Matters aims to continue to be the watchdog for city governance while at the same time fostering communities working for change in the city through journalism.

Jagadeesh, Joint Secretary, Yelahanka United Environment Association (R) -YUVA, a Citizen Matters reader, said in his email to Arathi Manay Yajaman, Citizen Matters writer and blogger who manages ‘Like a Lake’ and ‘Puttenahalli Post’ blogs : “Congratulations to you and Citizen Matters on winning the prestigious Namma Bengaluru Award! Such an inspirational work does not happen without a great deal of effort on the part of everyone in Citizen Matters. We Bangaloreans are fortunate to have you all to take the lead for a noble cause for the city and wish you more success in the future.”

Ashwin Mahesh, a director at Oorvani Media Private Limited, the firm that publishes Citizen Matters, recused himself from the panel while judging the awardees for Media and Journalist categories. Mahesh also does not have any editorial responsibilities at Citizen Matters.

Citizen Matters looks at this award as a recognition of the web-platform we have created for citizens and journalists to partner in the cause for a better and democratic city, without either side compromising its own independence. We also look at it as an award that recognises the power of independent media.

The Namma Bengaluru Award for lifetime achievement this year was conferred on Venkata Subba Rao, the lake crusader who saved Byrasandra lake from vested interests.

Hemanth Kashyap, Chief reporter of News9, won the Namma Bengaluru Award in journalists’ category. Citizen Matters journalist Navya P K was one of the finalists in this category.

Is the BMTC indulging in price-gouging?

Bus travellers in Bengaluru claim that BMTC is charging more than it should. Ticket from Kundalahalli to Majestic shows 24 km when it should be 17.5 km.

All roads lead to Metro

After a two year delay, Namma Metro finally chugs on. Although it is only Reach 1 of Phase 1 with lot more of the tracks to be laid, Bengalureans were out in full force to celebrate the moment.