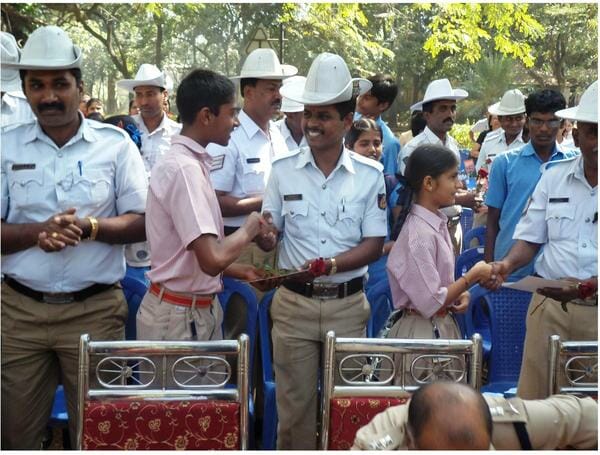 A file picture from an earlier edition of Traffic Police Day.

Despite the growing vehicular population, Bengaluru is kept on the move thanks to its traffic police. Battling the harsh sun, rain, pollution, the indignant citizen and many civic woes, the service of the Traffic Police goes unnoticed. With the aim of urging young people to recognise their tireless contribution and to empathise with the hardships they face, (Children’s Movement for Civic Awareness) CMCA organises ‘Traffic Police Day’.

Traffic Police Day is dedicated to thanking one of the city’s unacclaimed heroes – the traffic police. 2016 marks the 11th annual celebration and was flagged off earlier today at Traffic Police Park on St Mark’s road, in the presence of Dr MA Saleem, I.P.S. Additional Commissioner of Police, Traffic. About fifty traffic constables and hundred members of CMCA from a few of its member schools (private and government schools) were present at the event. The event will give the children a platform to express their appreciation towards the traffic police.

As part of these celebrations about 5,000 students, who are members of CMCA, during the course of this month, will visit police stations and manned junctions near their schools to meet the traffic police and present them with a thank you card. Alternatively, traffic police constables may be invited to their school assembly during where they will be felicitated.

Why does CMCA celebrate the traffic police?

Bengaluru is known to be one of the fastest growing cities in terms of vehicular traffic. With lakhs of vehicles plying on the roads and new registrations every day, managing traffic has become a challenge for the 2,000 traffic police constables and officers. Despite all constraints, the traffic police manage traffic to the best of their ability, yet remain unsung heroes. CMCA’s Traffic Police Day is conducted to sensitise its young members to issues related to traffic and to acknowledge the contribution of the police towards the safety of the general public.

Children’s Movement for Civic Awareness (CMCA) is a 15 year old volunteer driven, civil society organisation that conducts a national citizenship program through ‘civic clubs’ in schools across India. This systematic and structured intervention is dedicated to sensitising children and youth to civic and democratic issues, thereby improving quality and equality of life. Over the past year alone, CMCA has reached 17,000 children in 11 cities and 28 villages in Karnataka, through 300 volunteers in 300 schools.

A heritage enthusiast plays history’s detective to discover a rare gem that was hiding in plain sight.

Millions of workers who did not demand wage!

The expense of composting Bangalore’s wet waste shot through the roof, with the income not being able to match it. Then,”I began to recruit new staff; millions of them!”