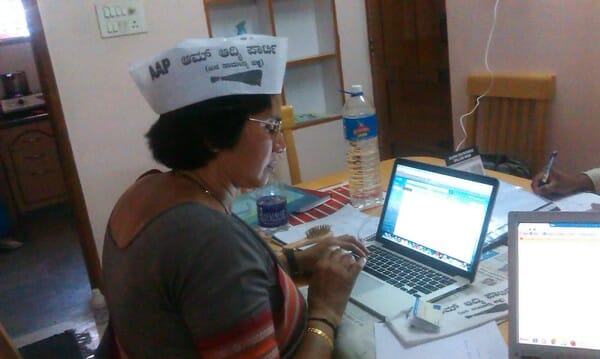 Nina P Nayak, contesting on an AAP ticket, with 30 years of experience as a social worker and member of various Child Rights committees, now forays into representing Bangalore South at the Lok Sabha, though she stays in Malleshwaram which belongs to Bangalore North constituency.

She has worked extensively on the child protection front. Her works have significantly contributed for the recognition of child rights, policy formulation for these rights and their implementation by the Government of India. She has been actively promoting the implementation of ‘Juvenile Justice Act’ and the ‘Protection of Children Against Sexual Offenses Act’. In 2009, when she was appointed as the Chairperson of the Karnataka State Commission for Protection of Child Rights, she was quoted saying, “we hope to be the eyes and ears of child protection”.

Born in a Chennai household, father retired as Tamil Nadu DGP and rather than following her father’s advice of getting into police services, she completed her Masters in Social Work. Since then she has worked in the field, from Chennai, Kolkata, Delhi and Bangalore. Her mother tongue is Konkani but Nina Nayak can speak six Indian languages because her father had a job that required them moving from one city to the other.

We will set up AAP ward committees if we win: Nina Nayak
Nina tries to woo the Aam Aadmi wearing anticorruption hat