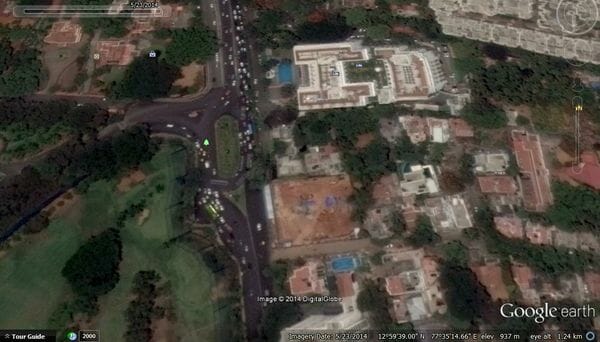 Namma Bengaluru used to be a very beautiful city. There were beautiful circles, tree-lined avenues and lots of greenery to complement the wonderful weather.

However, in the last few years a lot of the beauty has been destroyed in the name of development. First the circles were removed – owing to the misplaced notion that its better for traffic to have a four or five way intersection. Then the trees were removed – owing to the misplaced notion that widening roads helps avoid congestion. Then came ugly underpasses and flyovers – the idea being to make roads `signal
free.’ This came at the cost of the lives of many pedestrians – as no provision was made for pedestrians.

The latest plan of the Bangalore Development Authority (BDA) and government is to build multi-level elevated superhighway from Chalukya Circe (Basava Circle) in central Bangalore all the way to Hebbal Flyover – a total distance of 10.9 kilometres. This is to cost – at current estimates, a whopping 1100 crores – almost the amount collected as property tax per year by the BBMP. It is a completely foolhardy plan which will destroy whatever little beauty remains in central Bangalore. This must be stopped.

The stretch from Basaveshwara Circle to Mekhri Circle, ironically still called ‘circle’ though neither of them are anymore, is one of the most beautiful stretches of roads in Bangalore. It was a shady boulevard flanked by a golf course on one side and the Palace grounds on the other. Tall rain trees still cover some stetches of the road. If the highway is built, it will completely destroy this stretch. A few years ago they hacked all the trees on Chowdiah road beside the golf course and the area has barely recovered. Now they want to assault it again.

In order to argue why this plan should not go through, let me first describe the problem. There are a few problematic points.

At the end of the day, as a city grows, one cannot really avoid traffic jams. There will always be places where at some point traffic will be held up. Basaveshwara circle is one such example – but at the end of the day it is not so bad – it amounts to at the most a five minute delay. Construction of mega flyovers will cause terrific traffic jams for the next several years, make the whole area ugly – and at the end of the day, not really help all as much. If necessary, the highway can be built from Mekhri Circle onwards, where the beauty of the road has been already destroyed.

In many major cities – Boston, Portland and Seoul being notable examples – billions have been spent to remove highways through the city. Toronto and Dallas would also like to do that – but the cost is prohibitive. It’s not clear why our city fathers want to repeat the mistakes that other places have made.

We have inherited a beautiful city. It is up to us to see that it does not get destroyed. In India we care a lot about our families. We should just extend the notion of family to the city around us. The writer Eduardo Galeano describes it well –

To the people of Africa and the native people of America, your family is your entire village with all its inhabitants, living or dead
And your relatives aren’t only human
Your family speaks to you in the cracking of the fire
in the murmur of running water
in the breathing of the forest
in the voices of the wind
in the fury of the thunder
in the rain that kisses you
and the birdsong that greets your footsteps

It is that family that we should take care of. We cannot let it be destroyed.

The opinions expressed here are the writer’s own. Citizen Matters and Oorvani Foundation are not responsible for the accuracy and relevance.

How about a food street for Malleshwaram?

Who cares for the security in Bengaluru’s government schools?

The government talks of de-recognising private schools. But has it taken stock of the situation in its own schools? Forget CCTV, many schools don’t even have gates and toilets.

Planting forests in Bengaluru: Bimal Desai tells you how

Bimal Desai has fought for years to protect Cubbon Park and other green spaces in Bengaluru. Now he is creating forest patches across the city using the Miyawaki method. In this conversation with Citizens Live, Desai talks about his initiative, and how every Bengalurean can replicate it to make the city green and liveable again

Over the last one week, thousands of Indian students and youth across India, inspired by the Global Climate Strike organised by ‘Fridays for Future’, marched together to demand immediate action to mitigate local and global climate risks. What should be the way forward?