Radha lives in R T Nagar. With her office located in Koramangala, she has to travel around 15 kilometres every day. Without convenient bus connectivity, she had had to resort to autos or cabs. When her neighbour who also commutes to Koramangala everyday, offered a shared ride, Radha was only too happy. 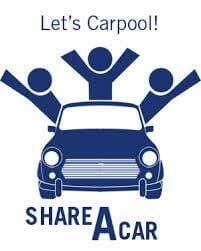 A small solution to the enormous traffic on road during peak hours, the concept of cab sharing has picked up in Bangalore. There are also many mobile apps and websites to help people find like-minded travellers on the same route.

“I remember going to Goa once from Bangalore when flight ticket had a discounted rate of Rs. 900 only, but the cab to Bangalore Airport charged me Rs. 1,000 which was ridiculous.” says Setu Saurabh, an IIM Ahmedabad graduate. He went on to co-found RideShare.co, a website that helps find carpool partners.

Saurabh shares, “I thought there must be so many people going to airport at any time, so I started using a facebook group Airport Cab Sharing Bangalore and almost every time I have traveled at half or one third of the meter cost, which is amazing”.

There are other benefits too. “As it’s a facebook group about Bangalore cabs, everyone keeps contributing with amazing offers or coupon codes which benefit everyone in the group and makes their airport cab cheaper.”

Well, when there are facilities to share cabs, why isn’t it happening on a larger scale? The size of the carpool network and security concerns seem to be the issues.

Pratvii Ponnappa, a media professional, feels that public transport can be the best transport if people can travel with comfort whereas carpooling will take a lot of time to establish its network. Further, as the carpoolers are distributed across all these websites, there is no one place where you can find all carpoolers, hence you have less chance of finding a suitable commuter on your route. Navratan Katariya, a carpooling promoter shares, “The movement needs a catalysing force, media has to pitch in in order to motivate people.”

Security of the individual is another major concern. Ponnappa notes, “From our childhood days, we were taught that we should not take lift from strangers.”

However, amidst all the concerns, many are happily carpooling and enjoying the benefits. Khushi Radhya from Bangalore posted on Carpool and Rideshare Bangalore (& Mysore) page on Facebook, “Been car-pooling since 4 months now. Hebbal to Silk Board, approx 40 km to and fro. Initially it was an intro and getting to know your fellow commuter, and followed by a couple of work-related interactions… and now we plan weekend outings too. Adventure escapades and voila we have become good friends…. we have saved 8000 rupees each over 4 months and it’s loads of fun and stress buster indeed…”

There are some facebook groups like Carpool and Rideshare Bangalore and Airport Cab Sharing Bangalore where you can post, search and communicate with other people who are doing carpooling.

There are online portals which will directly connect you to the facebook and linkedin profile of the commuters. This can help the individuals to establish trust with the co-traveller. Rideshare, Commute Easy, Carpooling, Ridingo, Carpooladda, BTIS, Pool My Car and Taxeeta are the websites which are trying to help people with carpooling. The Android-based mobile applications available in India are also available: Togethr, Carma, Lets Drive Along, Pool circle, Ridingo, Zinghopper and RideAlly.

Quite a few of these are actively operating in Bangalore.

Research on carpooling in Bangalore

Akansha Minz, a post-graduate in Applied Economics from Bangalore University, recently completed her dissertation on Carpooling among working professionals who found carpooling as one of the best transportation alternative in Bangalore.

In her research findings, Akanksha found that majority of carpoolers don’t face any problem while carpooling. The dissertation says Bangalore has a huge percentage of existing carpoolers as well as potential carpoolers.

Her findings also says that, most of the IT professionals in Bangalore have similar office timings so they are availing the facility without much difficulty. Single men or single women do not get carpooling partners – especially females do not get female partners.

The researcher also came to know about the information that, many of the car owners do not prefer sharing the fuel cost with the carpooler partners – they rather prefer rotating cars every next day when the partner also has a car.

It’s probably easier to practice safe carpooling when you’re doing it with neighbors or colleagues. There is a sense of security knowing that you already have a relationship with the person so there is less of a risk than driving with a stranger. There are some tips that could be useful when you are car-pooling with a stranger.

Carpooling has a host of advantages including: reduced cost of travel, company during commute, reduced fuel consumption, less traffic on roads and parking problems and less hassle. If carpoolers get priority in parking and lane usage, like in developed countries, it could help in making carpooling an even more attractive option for commuters.

As Mark Rasquinah, a lecturer from Kristu Jayanti College, Bangalore says: “Every time we pool a ride, we are saving a resource that will get exhausted some day. We owe it to the future generations to save a resource like crude oil.”

About Vikram Kapoor 2 Articles
The author has not yet added any personal or biographical info to her or his author profile.

Bengaluru has a multitude of helplines for COVID patients. How do these helplines allot beds or follow up with patients? And do they actually help?

Be careful while buying an under-construction property

If you don’t care about what the builder is doing, you will finally end up not getting Occupancy Certificate and A Khata for your property. Be very careful!

In his last tenure, D V Sadananda Gowda was moved across three different ministries. The reason often cited was Gowda’s inability to get works done