As the controversy on the location of the upcoming Cantonment metro station continues, Bengaluru Metro Rail Corporation (BMRC) has left many questions unanswered. While a citizens’ group has been demanding metro station right in front of the railway station where it was planned originally,  another is demanding it at the alternate location proposed by BMRC, at Bamboo Bazaar. With BMRC refusing to answer questions raised by citizens and the media, the suspense remains.

Cantonment metro station was originally supposed to come up right opposite the Cantonment railway station, under its parking lot, as per the Detailed Project Report (DPR) for phase 2 of metro. The aim was to integrate both stations and facilities around it, allowing passengers to switch between railway and metro easily. The DPR had been prepared by Delhi Metro Rail Corporation (DMRC) after geo-technical and environmental studies, and interactions with BMRC; it got approval in 2014.

Controversy arose when BMRC published a different location and alignment for this station in June. The alternate location was at Abdul Bari’s High School ground in Bamboo Bazaar, about 900 metres away from Cantonment railway station. The alignment was much shorter, and BMRC said it would save construction cost of Rs 1,000 crore.

Citizen groups protested against the change, arguing that metro would be integrated with railways, bus stop, auto, parking etc only if the station was at the original location. The state government then asked BMRC to survey land for the original alignment.

The survey has resulted in a fresh round of protests – this time from the residents of Maangalya apartment located along the original alignment. A mid-tunnel shaft would be needed at the apartment site, as per BMRC survey. There are 59 households and about 500 residents in the apartment. The DPR had mentioned that this shaft would be required since the distance between Cantonment and Pottery Town stations was above 1.5 kms. But it had not specified the exact location. This is the only stretch in phase 2 where a mid-tunnel shaft is being built; distance between stations is below 1.5 kms in all other cases. The shaft is needed both for ventilation and for evacuating people during emergencies.

U A Vasanth Rao, Chief Public Relation Officer at BMRC, says, “The DPR was only for in-principle approval; details are worked out through our survey. The impact caused by the original alignment will be placed before the state government, and the government will make a decision.”

As per a top BMRC official who did not want to be named, the area of the shaft will be 40 m X 40 m (1600 sq m), and a total workspace of 4-5 acres will be needed during construction. Also, the two approach roads to the apartment – Millers Cross Road and Benson Cross Road – would have to be widened from about 30 ft currently, to 60 ft. This is for heavy vehicles and machinery to access the site during construction, says the official. These roads are currently lined by many apartments and houses.

The official says that the underground tunnel will have to be 30 feet deep as it passes under Cantonment railway station, and correspondingly, the shaft will have to be 40 ft deep too. “As per railway rules, metro line can come only 30 metres under railway stations. If the tunnel was not passing under the station, it could be dug at much smaller depths, and would cost much lesser. This would be the case with the Bamboo Bazaar alignment, The shaft also won’t be needed as the Bamboo Bazaar alignment is shorter,” he says.

Also, “as Benson Town has rocky terrain, controlled blasts will be needed during shaft construction, which will weaken the foundations of buildings here. There are many old, heritage buildings in the area.”

The administrator of The Metro Rail Guy, a blog that tracks all the metro constructions in India, who wanted to remain anonymous, points out similar case of a ventilation shaft in Kolkata. There the shaft is planned to be built in the 2.2 km stretch between Esplanade and Sealdah metro stations.
According to him, there are very few cases where distance between metro stations is too long, requiring ventilation shafts. Delhi Metro more commonly builds cross passages, an alternate emergency measure. These are built about every 244 m in twin tunnels, so that passengers can evacuate from one tunnel to the other in case of an emergency.

Is BMRC talking about non-existent rules?

What isn’t clear yet, is also why the tunnel and shaft need to be as deep, making the original location less preferable.

While BMRC talks about damage that the deep tunnel and huge shaft can cause, it has not produced the supposed railway rule that prevents metro construction till 30 feet under railway stations. BMRC had cited this reason earlier too, for avoiding the original alignment. While Rao says that the railway rule exists, South Western Railway’s Chief PRO E Vijaya says that it doesn’t.

Vijaya says, “All facilities that cross a railway station need permission. In the case of metro line, local rail authorities can’t give permission; it should be taken from the Railway Board. There is no rule preventing metro line under stations or requiring it to be at 30 metre depth. Digging a tunnel at 30 m depth would be difficult anyway.” She points out the example of Majestic railway station, where the metro line passes just 8 metres under the station. 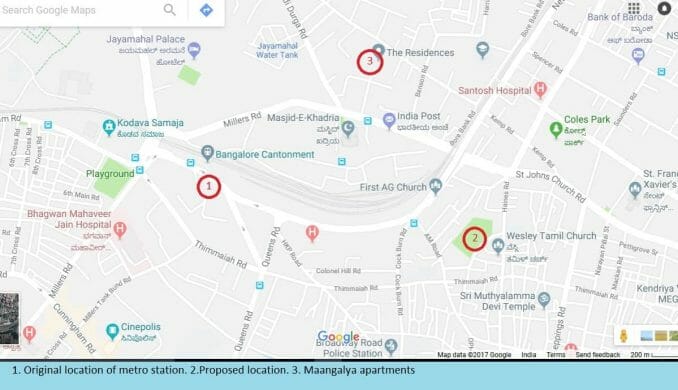 BMRC has not been able to produce the rule under RTI requests too. To a RTI that Dugar had filed for the rule, BMRC replied last month that the information should be obtained from railways. Citizen Matters has a copy of the RTI.

Citizen Matters did find a 2009 railways guideline which says that metro line should pass 30 metres under the railway station, only if railway itself is planning an underground structure there. Vijaya clarifies that there are no such plans for Cantonment station, and hence this rule would not apply.

However, “depending on soil condition in the area, railway can ask metro to dig the line at a particular depth. But this is specified only at the final stage, while giving permission,” says Vijaya. She says that BMRC did give a written request to railways for land, around June 2017. “But they had requested for a large land parcel, so the railway asked for a joint land survey. BMRC never responded after that. So we never mentioned any requirement about depth of the line,” she says.

Another issue BMRC had raised earlier, was that acquiring railway land for the metro station was difficult. But Vijaya says that railway is ready to accommodate any request by the metro to have the tunnel under the railway station or to acquire land for the station. Railways has set aside 0.33 acres in the parking lot, for the overground portion of the metro station. “We don’t want the land to be unavailable if metro wants to build the station there later. The adjoining four acres land has been reserved for commercial development,” says Vijaya.

In the next part, we will look at why the station location is important and what alternatives exist.

Now it’s Cubbon Park: Just how many times should Bengalureans protest, to save their heritage?

Several laws have been made, and commissions formed, to protect Bengaluru’s heritage. Why then do we have to get on to the streets and protest every time our commons is threatened?

BMTC is the preferred mode of transport for Bengaluru women. But for those travelling to the city’s outskirts and other areas where the plush Volvos don’t ply, safety is a huge concern.