A few years ago, when the Bangalore Metro began its work, several roads were either closed or their width was reduced due to the work. And some of those roads still remain closed or under repair. Somehow, the traffic continues to meander and find its way through other roads. In fact, traffic like water will always find its way; so the question which I ask is, ‘Can we permanently close some of these roads and put these spaces to alternate uses’?’

This occurred to me the other day while crossing Chinnaswamy Stadium towards Raj Bhavan when I saw a set of defunct signals. Only later did I realise that that in fact used to be where Cubbon Road intersected Queen’s Road. That road has now been closed for close to three years and vehicular traffic still flows relatively freely with the occasional traffic hiccup. 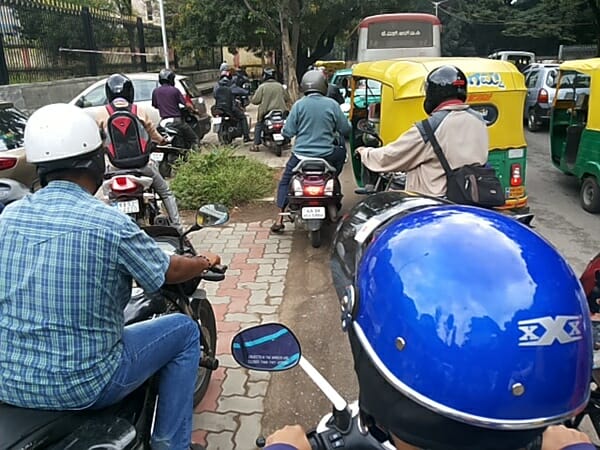 But that is not something new to people of this city or any Indian city for that matter. The point is that now that people, motorists specifically, have become used to not having that road (and I’m sure there are several other roads which the Metro or other such work has shut down for the moment), why not make this change permanent and use this opportunity to permanently shut down that road and think of converting that space into a public one? There are several options that can be explored—a boulevard just like the one on M G Road, a green patch, an extension of Cubbon Park or something else.

The concept of reclaiming roads and converting them into public spaces which non–motorists can also use is not something which is new, at least in the global sense. The oft-quoted example is that of South Korea where a river which was closed to create a flyover was later on rediscovered—when the flyover was demolished and the river reinterpreted as a public space which could be used by a larger number of citizens.

In India, that concept is yet to catch on—both from the public imagination and from a policy point of view. There are some instances where certain Indian cities have taken the lead in this matter. The instance of Delhi, Gurgaon and now Ahmedabad in promoting something called ‘Rahagiri’—a concept where a road is closed off (hopefully with official sanction) for a part of a day during the weekend, and all kinds of fun activities happen—cycling, children with roller-blades etc. Closer to home, in Bengaluru, different areas organise cycling days once a month. Maybe we require more of this and in a institutionalised manner which will make this permanent.

The other project in the city which is another example of re-appropriating roads for pedestrians is the TENDERSURE road standards. My own view on the controversy is that the hoopla surrounding the TENDERSURE road standards is nothing more than an institutionalised attempt to re-appropriate road space for the non-motorists, something which has been taken away from them over the years.

Here, I must say that though these standards are welcome, I certainly wish that the process by which these standards came into being and were implemented had more clarity. It would have been beneficial if a certain process of public consultations with residents of that area, along with users of those roads had been solicited. However in a country where ‘jiski laathi uski bhains’ is the norm than the exception, it appears that it would have been difficult to follow that due process and expect just results.

However, if something like TenderSure is to succeed, there are a couple of things which desperately need to happen.

2) There is a need to provide alternatives / incentives, in the form of a robust public transport system which might encourage motorists to shift, round the clock policing to ensure that motorists do not use the footpaths and so on. These two things must happen in tandem if we have any hope of making sure that these re-appropriated spaces stay in the public domain.

The thing about motorists is that they are like a bottomless pit, whose demands just keep increasing. Increasing road space for motorists is certainly not going to solve the problem. In transport planning, there is a concept called ‘induced demand’, which means that increasing road width and size will only serve as an incentive to bring more vehicles on the roads. As Bengaluru burgeons, it will become increasingly important to actively think about spatial equity. Re-appropriating roads to make them more non-motorised friendly is one way of looking at that.

When the BMTC bus stops to buy vegetables and vadas
Citizens bat for new train to Whitefield, to ease traffic congestion
Mobile app to report traffic violations, ambulances with GPRS on the anvil

Paint your dream park at Cubbon Park this afternoon

If you are an environment enthusiast and a creative person, this one is for you. Paint the Cubbon park of your dreams, to help turn it into a reality.

Diwali cleaning: All for a cause

Mum had been asking me to dispose of my huge collections of comics and story books, my old school books, clean up my room and get rid of what she calls ‘all the junk’. So what did I do?