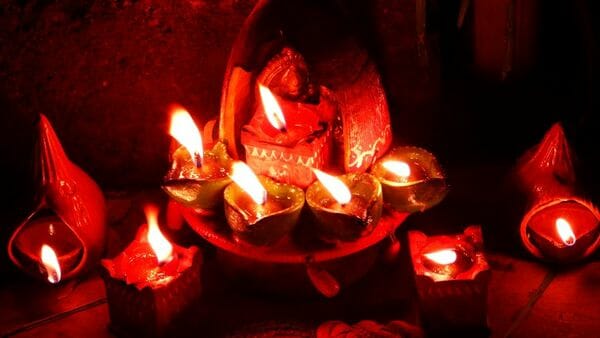 Deepawali/Diwali is around the corner and there is excitement in the air. Advertisements are everywhere filling billboards, newspapers, televisions and radios. People are busy shopping for clothes, lamps, fire crackers and puja material. A majority of us look forward to the festival of lights.

For children it that time of the year when they get to burst fire crackers. Some love to be adventurous and burst bombs and not the milder crackers, flower pots or sparklers. Some want to feel heroic so they light crackers holding them in their hand. Or they place junk or garbage on the bombs and get a thrill watching stuff fly around in different directions.

Most parents do not advise their children about the harmful effects of bursting crackers. They instead buy them more crackers as it is a status symbol. Youth always purchase chains or garlands of crackers and there is keen competition as to whose chain is the longest. There is never a moment of silence during the three days of Diwali, except for a few hours respite late at night and early morning.

Whether noisy bombs or mild sparklers  – all emitting poisonous fumes into the air – they are a must during Diwali. The supposedly aware teachers too most often do not inform children that crackers are a source of highly toxic air pollution. Children are only warned to be careful while bursting firecrackers but no more information is given to them. Kids do not even know that children of their age are employed in places like Sivakasi in manufacturing crackers exposing them to severe health hazards and seriously violating human and child rights.

Deepavali a nightmare for pets

Those of us who have pets have noticed their dogs/cats hide in dark corners or bathrooms for several days during Diwali. While people enjoy festival food, animals starve and shiver in fear. It is a common sight to see dogs running helter-skelter on roads, and there is no assurance if they will ever be able to find their way back home.

What might happen to street dogs which fearfully hide in drains? It’s a question that I have found no answer to, even after losing my dog during Diwali. She shivered day in and day out as people outside fired away. She refused to step out to relieve herself for three days. Finally when the sound had subsided, she went out and just as she was relieving herself, someone fired a cracker close to her. She bolted out of sight. Desperate days of searching for her and making enquiries by showing photographs did not elicit any response. She may have been hiding in gutters paralysed by fear or might have run around aimless and disoriented, and got hit by a vehicle. I will never know what happened to her, but the fear and trauma she must have gone through is terrible to imagine. I do not think she or any animal for that matter deserves such suffering.

What about wild animals and birds, that are also part of our world? How many of us empathise with them?  Small wildlife like birds, squirrels and snakes get burnt, displaced or abandoned while people heartlessly enjoy themselves bursting crackers. Not many care about animals that die of shock and burns. The sense of hearing in many wildlife species is so well developed that the sound of firecrackers has a huge impact on them. I have seen owls shake their heads in despair when they hear a loud noise close by. What must happen to them during Diwali? Rockets which fall or pass through tree canopies disturb nesting and roosting birds and force them to leave their homes and abandon young ones. Nocturnal animals like owls and bats are unable to source food and starve for days. Do we really care?

Why cannot Deepavali be a peaceful affair?

Getting people to understand the suffering that other life forms go through is a big challenge. Attempts have been made to get people to understand the suffering of humans (especially the old and the ill) with the hope that they can connect better with their own kind. I have been speaking about the children in Sivakasi (Tamil Nadu) laboring to churn out fireworks, contracting diseases in the process, children who have lost their eye sight and, in extreme cases, even losing lives owing to accidents in factories. But getting people to turn sensitive to such issues has been extremely difficult.

Values have to be instilled in children by their parents and teachers but when the adults themselves are insensitive, is there hope? Though there are many NGOs, TV campaigns, and schools striving hard to educate children as well as adults, most people don’t seem to really care.

Let us compare the above bleak scenario to how Diwali is celebrated in my native village in Sakaleshpur, located in the Western Ghats of Karnataka. It’s a peaceful, non-intrusive celebration, with a connection to nature. Men go out early in the morning to collect Pandanus leaves and these are temporarily planted in paddy fields and in the front yard of the house. Pandanus is known to act as an insecticide/pesticide. Leaves from various species of trees are collected and tied in different places both inside and outside the house, while the women prepare a variety of delicious dishes. In the evening Pooja takes place and there is hardly any noise or damage to the environment. Bursting crackers was not practiced for fear of hay catching fire. But there is a slow intrusion of crackers in the Ghats too, thanks to the change in lifestyle and the influence of city trends.

The celebration of Diwali signifies “victory of good over evil”. Ironically, we are doing more evil than good, by making people and animals suffer due to our irresponsible, reckless and insensitive action. Diwali is not about lighting lamps but the most significant spiritual meaning behind it is “the awareness of the inner light”. We seem to have lost the true essence of celebrating Diwali. Instead of dispelling ignorance and darkness of the mind, we are encouraging evil and degradation of the mind. When we are unable to light the lamp within, where is the question of compassion towards other life around us? And the cosmetic purpose of lighting external lamps?

Diwali happens once a year, but our obsession to burst crackers has become a rising trend, be it a cricket match, festivals, marriages or other celebrations. Will there be an end to the suffering of life around us? Are we willing to stand up and speak against this? Or will be silent spectators to the continuing violence and madness around us?

About Abhisheka Krishnagopal 1 Article
The author has not yet added any personal or biographical info to her or his author profile.

Politicians are responsible for visual pollution in the form of posters, banners and billboards in the city of Bengaluru.The city needs a break from ‘political litter’, argues Kavitha Reddy.

My alarm goes off at six, and I roll out of bed excited because today is the first time I get to cast my vote. Two weeks ago, I applied for a voter’s id. My

The Cabinet’s act of quickly passing an ordinance that allowed convicted and jailed MPs and MLAs to contest the election is an example of what can happen if we don’t elect right breed of leaders.