While the nation is still recovering from the unforeseen historic results of Delhi Assembly elections, Aam Aadmi Party (AAP) is busy preparing to attack other cities and states. Next in the hit list seems to be Bengaluru.

AAP’s Karnataka unit members who are flying high with the clean sweep of the party in the Delhi assembly election are now silently preparing for BBMP polls. The civic body poll is likely to be held this year—in 2015, as the term of the BBMP council ends this April.

Though the party did not fetch any seats and underperformed in its political debut in Karnataka during parliament elections last year, the Delhi poll result has raised new hope in the party cadre. 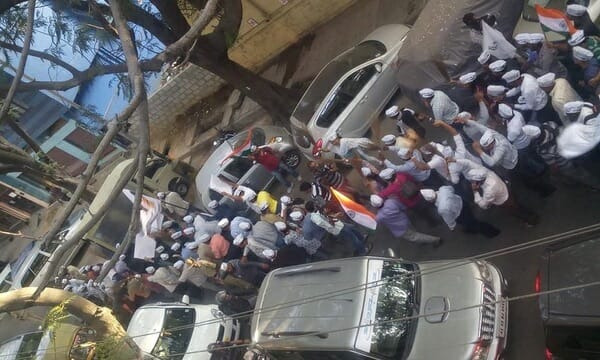 Hitting the ground running in Bengaluru

In fact, AAP has been eyeing BBMP polls soon after the parliament elections last year. It had also fielded booth-level volunteers to understand the pulse of the people, whose list is available in AAP-Karnataka website. Recently the party’s state unit also launched Bombat Bengaluru, an initiative to provide a platform for forming Bengaluru-specific policy.

Many AAP volunteers who want to contest BBMP elections have joined public policy courses, such as Bangalore Civic Leadership Incubation Programme (BCLIP), or AAP’s own training courses. Videos focusing Bengaluru, blog posts, regular appearances in public forums and meetings, online forums that focus on local problems of each ward etc., are already coming up one by one, proving that AAP is serious about capturing Bengaluru’s voters.

AAP Karnataka State Convener Siddharth Sharma, who is a former journalist, says the concept of Bombat Bengaluru aimed to organise dialogue and deliberation with citizens of the city on various civic issues, understand their problems and expectations from the elected representatives.

“During these deliberations, what we realised is that the people are least bothered about who / which party delivers them the service, all they need is a systematic delivery of service. Therefore, the party will come up with a full-fledged agenda on various issues that need to be addressed by the elected representatives in Bengaluru and keep the agenda open for public discussion. Other political parties too will be invited to respond to the agenda and include them in their election manifesto. We would like to get rid of the old-fashioned politics,” he says. 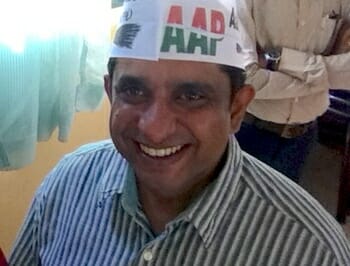 ‘Caste may not be an issue in Bengaluru’

Even though AAP hopes to perform better in BBMP polls after the Delhi election results, council election is a different ball game altogether. In fact, the AAP leaders from the state themselves say that it is too early to predict.

On the other hand, they opine that caste and community factors could hold less weight in the Bangalore polls, taking the lead from Delhi. “I do not know if the impact of Delhi result will last long, but I am convinced that the election could be fought and won putting aside caste and community politics. In Delhi, AAP volunteers have worked really hard and we would have to do the same to reach the grassroot voters in Bengaluru,” says AAP National Executive member from Bengaluru, Prithvi Reddy.

On asked if caste and community strategies on which the conventional political parties bank on in the state would make it difficult for the AAP to face the election, Reddy said it would not. “Caste politics is comparatively more in Delhi where the voters belonging to Jat, Sikh and other communities, are expected to vote for particular parties. The very fact that such calculations did not work out in the national capital, convinces me that we can overcome caste politics in Bengaluru too.”

Women to be given importance?

“Though 50 per cent of the seats in BBMP is reserved for women, most of the women candidates are usually fielded by the conventional political parties based on the strength of the men behind them. These women, upon elected as councillors act as proxies to their husband or father. So far, the voters had no other option but to vote for them. If at all the AAP uses the opportunity and fields able candidates who are self-made, the party is sure to win some seats in the local body election,” he opines.

He is also of the opinion that AAP can draw the attention of the voters by highlighting local issues in the election manifesto. Bengaluru city is terribly corrupt and overthrowing corruption should be definitely the main priority of the party. It should also touch upon specific local issues such as lake development, electricity tariff, traffic, roads etc, he says.

The popularity of Aam Aadmi Party in Bangalore which is more or less restricted to the educated class, has several challenges when comes to the Bengaluru corporation election. One of the factors which is said to be a drawback for AAP is to handle the language barrier. AAP Delhi for instance runs all its campaigns in Hindi and uses English only when critical or with the English media. Workers and leaders speak Hindi. In Bangalore, a large number of AAP activists are non-Kannadigas and are not fluent in Kannada. There is a perception that this can act as a hindrance in the process of election campaigning.

When the same question was posed to Raghunandan, he agreed that it was a disadvantage to some extent, but the problem could be overcome. “The party is likely to restart its membership drive soon and scores of people will register their names. The united effort of all the members will fill the gap. In fact, a lot of non-Kannadigas are doing their best to learn Kannada and converse with local people,” he observed.

The communication of AAP-Karnataka on social media and press notes is bilingual, with both Kannada and English.

When asked whether the party has reached out to low income groups and slum dwellers in the corporation limits, the retired IAS officer says that the party is trying its best to converse with informal settlements. “Slum dwellers lack identification cards, Aadhaar and voter ID. They often do not get an opportunity to vote. Basically they should get their right to vote, to whichever party it is,” he adds. 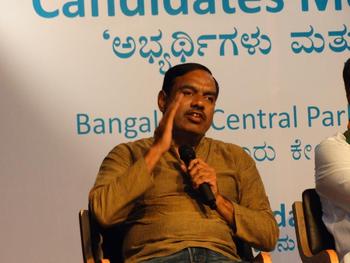 When asked how AAP will select its candidates, Raghunandan said that the party was working on the criteria to select candidates. “All I can say at the moment is that able candidates will be selected in an open and transparent manner.”

Infosys former CFO V Balakrishnan who had contested for parliament election from AAP in Bengaluru Central constituency, sees a lot of similarities in the issues of Delhi and Bengaluru which need to be highlighted in the BBMP election campaign. Like in Delhi, Bengaluru too has corruption, water, garbage problems that the party will take up during election campaign, he said.

Raghunandan hopes that the Delhi election will have a positive effect on fund raising. “Till recently people were skeptical of donating to the political party. With the victory in Delhi election, I am quite sure that people will donate generously and AAP will not suffer fund crunch,” he predicted.

Notably, highest donation (Rs three crores) for the party during Delhi polls, was pooled in Bengaluru. With AAP focusing on capturing the imagination of the voters in Bengaluru, it will be interesting to observe the strategy of other national and regional parties in the city in coming days.

Gubbi Veeranna’s grand daughter B. Jayashree is set to stage ‘Sadarame’ once more at Ranga Shankara.

Citizens of Bangalore have come to terms with potholes, overflowing manholes, dangerous footpaths and the dug up roads, thanks to the haphazard working way of the BBMP. CAG report has attempted to expose the irregularities once again.