S Raghu started his political career as a municipal corporator from the Bharatiya Janata Party (BJP) in 1996. He has won twice from his current constituency of C V Raman Nagar which is reserved under SC/ST category. Previously he represented the Shanthinagar constituency.

Some of Bengaluru’s most discussed land marks and civic problems fall under the C V Raman constituency. Public transport/connectivity to the high density Bagmane Tech Park; the cleaning up of the 45 acre Kaggadaspura Lake; portions of Indiranagar which are still reeling under rampant commercialisation are among a few noted ones. A lot of highly sensitive defence establishments are also in the area. Rampant real estate development which saw an increase of high rise buildings overlooking into their campuses compromising high security projects has been a cause of concern for these authorities.

S Raghu, who is the brother-in-law of Aravind Limbavalli, another city-based MLA, is a qualified engineer. Yet most of the problems in his area remain those which require engineering solutions. The changing political equations at the grass root level is also expected to be a factor in the elections – in 2013, all the seven wards in the assembly constituency had BJP corporators. This time, only three of them are from the BJP.

S Raghu in the Assembly:

S Raghu was a member of Committee on Sub-Ordinate Legislation.

S Raghu in the news

April 29, 2013: Days prior to his re-election from the new C V Raman Nagar constituency, S Raghu promised to look into core problems such as traffic, garbage disposal, the revival of the Kaggadasapura lake and the construction of a hospital for diabetes.

October 3, 2015: BBMP is not ready to take down posters advertising politicians on a bus shelter in Indiranagar despite orders from Urban District incharge minister Ramalinga Reddy. This particular one has MLA Raghu’s face plastered on it and he has not responded to the notice issued to him by the HC prior to the BBMP elections.

Jan 7, 2015: He gave Rs 4 crores from his development fund for the revival of Kaggadasapura lake, replete with a walkway around the lake and cleaning. However, the residents expressed concerns about the works.

February 4, 2017: In data published in the The Hindu with information from the State Assembly Secretariat, it showed MLA S Raghu had attended assembly proceedings  for only 70 days in four years.

June 19, 2017: MLA S Raghu was accused of keeping a number of projects pending during his tenure, the most important of which is the construction of a Railway Over Bridge at the Byappanahalli causing inconvenience to commuters and motorists. He approached the CM in 2013 requesting him to speak to Defence Minister A K Antony for acquiring land from the MEG. The other project being delayed is the cleaning of the Kaggadasapura lake.

October 3, 2017: Residents protesting the construction of a 30-feet walkway on Kaggadasapura lake phoned the C V Raman Nagar constituency MLA, but he failed to pick up the calls, disappointing them.

October 15, 2017: When he visited the family of a 16 year old girl who was washed away by a Storm Water Drain, Raghu was asked to leave the spot, leading to physical confrontations with the locals and his party men.

March 5, 2018: Raghu sounded confident of winning majority votes in the constituency for the fourth time as he openly called the Indian National Congress’ potential candidate Mahadevappa ‘a migrant’.

September 3, 2014: Raghu features in the list of 26 MLAs who didn’t submit their affidavits on assets to the Lokayukta.

October 15, 2017: People were outraged against MLA S.Raghu for negligence.

How did S Raghu make use of LAD funds?

He seems to have devoted a lot of attention to Kaggadasapura lake development. He has spent Rs 6.6 crore, almost three-fourth of his total fund allocation on this.

Apart from this, there does not seem to be any significant expense on any major development work. He spent Rs 1.40 crore on providing water facilities. There are 14 items that list “construction of clean drinking water unit” at Rs 10 lakh each.

The other parameters on which S Raghu spent a lot included road improvement, help for the disabled and education-related infrastructure. 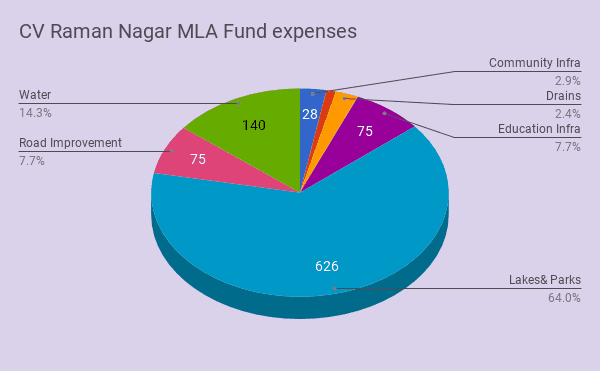 Streets of Bengaluru are decorated with the black cables that Cable TV operators, hang from trees, balconies and street light poles – crisscrossing everywhere, causing risk to walkers and vehicles. What is the government doing to solve the problem?

People from different walks of life attended the event and all of them addressed one common issue of water.

The city has an exciting line-up of myriad events to fête the spirit and achievements of women on this special day.