At a public awareness programme organized by the BWSSB in November 2016, an irate apartment RWA Member asked the BWSSB official present, “What is the point in setting up an STP when we’re already connected to the sewerage network? Treated sewage is going to mix with our neighbouring locality’s raw sewage in your drains which you will treat in a large STP. What is the point of all of this?”

Over the years, Bengaluru city has not only grown horizontally—to areas outside the sewerage network—but also vertically: previously sewered areas are seeing a manifold jump in sewage generated per acre as individual houses get replaced by tall apartments. In the absence of a sewerage network in the periphery (see the map in Figure 1) KSPCB’s order mandating installation of STPs inside apartment complexes was still understandable, although fraught with implementation issues, as was seen in Part I of this series. 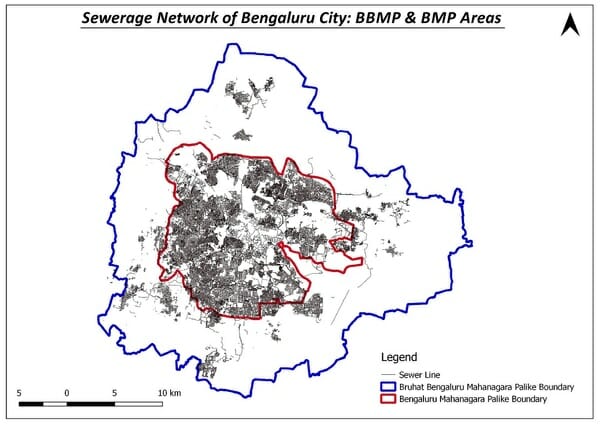 Figure 1: A map showing the distribution of sewer lines in Bengaluru. Source: BWSSB

But a similar move made recently by BWSSB targeting the core (sewered) areas, has generated much controversy. What has triggered this move, and is it a reasonable response to Bengaluru’s sewage problems? What has caused the angst in the RWA member’s comments?

Responding to the froth and fire event at Bellandur Lake back in April 2015, the Central Pollution Control Board (CPCB) sent a team which then submitted a report. The CPCB then issued directions, many of which were the usual ones—install an underground drainage system for entire Bengaluru, do not allow any untreated sewage to enter the lake, and to ensure treated sewage meets discharge standards. But it also included an ambiguous statement directing KSPCB to “ensure that all apartments with more than 50 units .. treat their sewage .. and reuse it.” What it failed to do was mention whether this rule should be applied inside or outside the sewered network of the BWSSB, and to existing apartments or new ones.

Taking a cue from the CPCB directions the Department of Forest, Ecology and Environment (DFEE) of the Karnataka government passed an order in January 2016, instructing various agencies including the KSPCB, BWSSB, BBMP, Karnataka Urban Water Supply and Drainage Board (KUWSDB) and the Electric Supply Companies (ESCOMs) across the state to ensure that all residential group housing projects as well as apartments with 20 units or more or having a total built-up area of 2,000 square metres or more to compulsorily install sewage treatment plants (STPs).

Thus, DFEE not only lowered a previously set threshold, but again, by leaving the language ambiguous, did not distinguish between sewered and unsewered areas, nor did it clarify whether its intent was prospective or retrospective.

On the other hand, it said nothing about reuse or Zero Liquid Discharge (ZLD), or about specific measures such as dual piping for using treated water for flushing.

Going another step further, BWSSB in March 2016 amended its sewerage regulations whereby it made mandatory for existing and new apartments of more than 20 units or above that are connected to its sewerage network, to install STPs. And while non-compliant new buildings would simply be denied a water connection if they did not comply, for existing buildings the regulation specified levies of 25% of the monthly water bill for the first three months and then 50% of the bill till they come into compliance.

Since October of this year, RWAs have begun receiving bills with these additional levies: around 1900 STPs of the total 3,348 apartments of size 20+ connected to BWSSB’s network have been fined so far. Thus, what was originally (see Part I of this article) an order that only applied to new projects in unsewered areas (peripheral Bengaluru), became, through a series of mis-steps, into a regulation applying retrospectively on existing apartments which are already connected to BWSSB’s sewerage network. But this new policy is highly problematic on many counts.

To begin with, asking apartments connected to the sewerage network for years, to now install STPs and retrofitting their buildings to enable reuse of treated water is highly impractical—most apartments would not have the space, and the cost of redoing the plumbing is exorbitant.

Moreover, enforcing the use of treated water for flushing would at best reduce water use by 25%, as we showed in the previous article. This reduction in load on the sewer lines is hardly worth the effort.

Finally, if the remaining treated water is released into BWSSB’s sewerage network and ends up in their STPs, it will actually be counter-productive: supplying a mixture of raw and treated sewage to an STP in fact reduces its efficiency.

BWSSB’s STPs are designed to treat raw sewage, and mixing of river water with the sewage has already impaired their functioning, as an ATREE study of Vrishabhavathy Valley STP has shown.

Unfair passing of the buck

Legally speaking, the responsibility for providing water supply and sewerage service to Bengaluru’s citizens lies with BWSSB. While it can charge citizens for the service, it cannot abdicate its responsibility and push the onus onto the citizens themselves. Moreover, penalizing customers who have already contributed to the capital cost of the network by paying betterment charges, not to mention monthly sewerage charges, is completely untenable.

Furthermore, this policy seems to add insult to existing injury. Apartments already pay Rs 22 per kilolitre of Cauvery water, as compared to the 4-level slab rates for individual homes (Rs 7 to Rs 45). This means apartment dwellers are already paying almost twice the average rate for freshwater.

This pricing system has already riled apartment dwellers, who point to the unfairness of their bungalow-dwelling neighbours paying lower rates. Now, the same apartment dwellers would incur anywhere between Rs 300 to Rs 1400 of operations and maintenance costs (O&M cost) per month for just operating the STPs (not to mention the capital costs), whereas individual house owners would still be paying Rs 100 per month for sewerage.

No wonder when the BWSSB held three public meetings in November 2016 to explain the new rule, the apartment RWAs shouted the BWSSB officials down and are now considering approaching the High Court.

BWSSB officials explained to us that they are struggling to play catch up with the meteoric growth of Bengaluru, including the vertical growth in core Bengaluru that has increased the pressure on their existing sewerage lines. But does the fault lie with individual apartment dwellers or with BBMP for its revisions in the zoning laws?

The worst irony is that if this sequence of (mis)orders was meant to address the Bellandur lake problem, they completely missed the mark. Bellandur lake has been polluted by untreated and poorly treated sewage mostly coming from the sewered areas of Bengaluru. The reason this happens is four-fold, as the Bellandur lake expert committee has pointed out.

Many houses have refused to connect to the network even when it exists, instead continuing to discharge sewage into storm water drains.  In other areas, such as the Agara lake catchment, sewage comes through BWSSB’s own pipelines but empties directly into Bellandur lake, simply because BWSSB does not yet have adequate sewage treatment capacity at that location. Some apartments adjoining the lake come under KSPCB’s earlier rule, but clandestinely discharge sewage into the lake.

BWSSB’s K&C Valley plant is also not always compliant with discharge standards and the present regulation does nothing to address these issues.

If we are to move to better sewage management in Bengaluru, then BWSSB should first simply rescind its faulty regulation. DFEE must also limit the order to prospective application in unsewered areas with a more meaningful threshold (see Part I, where we show that even 50+ is too onerous a threshold).

What DFEE should really do, rather than engage in one-upmanship, is to convene a meeting of agencies, experts and citizen representatives to think of a long-term strategy for addressing Bengaluru’s sewage woes. In such a strategy, it must be accepted that the statutory responsibility of sewage treatment is on BWSSB. Mandating otherwise is not the solution.

Asking people to either not build apartments in unsewered areas, or else take on the responsibility of sewage treatment still make sense, provided they are then not charged betterment charges when the network is eventually laid. And in sewered areas, giving financial incentives to those who choose to reduce the volume of sewage they discharge (like BESCOM did with solar water heaters) will be appropriate. Charging sensible water rates, making sure that the highly subsidized rates are only applicable to the truly needy, would also help.

Finally, BWSSB should focus on addressing the problems of broken and clogged networks and missing or under-performing STPs leaving the task of overall monitoring to the KSPCB. The regulatory body, on its part, should come up with a reuse policy for apartments at the earliest. Given the complete lack of clarity on the ZLD rule, options such as using treated water to fill lakes and supply of excess treated water to nearby BBMP gardens should be implemented.

Overall, a much more transparent, participatory and well thought out strategy needs to be worked out, communicated and implemented.

About Nakul Heble 1 Article
The author has not yet added any personal or biographical info to her or his author profile.

How disabled-friendly are Bengaluru’s malls?

The city’s building bye-laws list out a number of amenities that public and semi-buildings must provide to disabled citizens. Malls are the most recent additions to modern Bengaluru, and Ayesha Aleem checks out a number of them to see if they are in compliance.

If BBMP says no, what can apartments do?

With BBMP vacillating on their policy for collecting garbage from apartments, residents associations are exploring options. And find, it’s not easy.