The collapse of a five-storeyed building under construction in Someshwara Nagar behind NIMHANS, on 19 August, 2013, has raised several questions. Three people died in the incident, while eight workers were injured.

As the Fire and Emergency Department is searching for bodies of the labourers who could have been buried under the debris, citizens are worried if the property they are investing in is safe or not.

This is only a recent example. There have been six such incidents in Bangalore in last two months. The series of incidents, if not anything else, has forced the BBMP to undertake a special drive to keep a check on illegal and legal constructions. 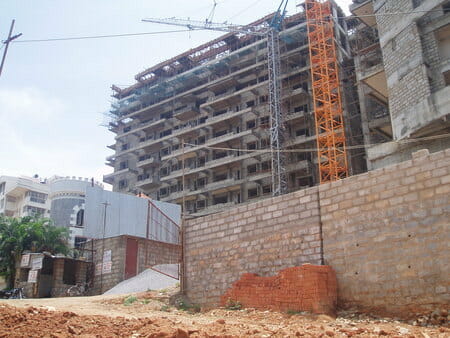 Why and how do buildings collapse?

Citing the example of the Someshwara Nagar case, Siddegowda K, chief engineer – BBMP (South) says that collapses occur primarily because of faulty design and improper foundation. Another reason is the failure of the safe bearing capacity (SBC) of the soil.

He explains that accidents occur if the foundation is not properly laid based on the soil bearing capacity and if it is overloaded. If the foundation is faulty, if it is shallow and cannot hold the weight, and if the portion of the structure is adjacent to a valley or wet bed, or on wetland, there are chances of such cases.

‘Be cautious and right always’

Former director of Fire and Emergency Services, B G Chengappa says that people are greedy and want to make quick buck. Naive buyers who want to save some money get lured. If a builder in one part of the road is charging Rs 20 lakh for apartments, and another on the same road is charging 40 lakh for an apartment of the same size, people should check for quality before buying either of them.

Speaking to Citizen Matters, Bangalore District In-charge and Transport Minister Ramalinga Reddy says: “Whenever a high rise building is being constructed, (that is more than ground plus three floors) builders and the sanctioning BBMP engineers must ensure that the road is at least 40 feet wide. In many cases, we have seen that this basic rule is also violated.”

“In case of Someshwara Nagar building collapse, it was not only the fault of the builder but also the engineer. This has been observed in earlier cases as well. So we, the (state) government and the BBMP, have decided to undertake a stringent drive at all construction sites and check if the building is legal or illegal. In case of illegal construction, the building will be immediately razed.”

He adds that action will be taken against the erring builder and the concerned engineer who sanctioned the plan. Notices will be issued to the builder and repeated offenders will be blacklisted.

He adds that more than the soil, the design and engineering of the structure matter. Skilled and qualified engineers should be deployed for the task. The manner in which the columns and beams are put is also important. They should be well-distributed.

In many cases, buildings are constructed near lake beds like incase of Madivala or Bellandur. Does this mean that they are weak? Siddegowda says: “No. It depends on design and proper foundation laying. For any type of construction, especially in case of apartments and high rise buildings, soil testing is crucial. This determines the SBC. If the SBC is low it is filled with soil and even steel to strengthen it.”

Bangalore Realtor Association-India (BRA-I) chairman and board member of Silverline Realty Private Limited, Farook Mahmood says: “Safety and design is something which is in the hands of the builders and engineers and not with legal or illegal building. There is a National Building Code which is a rulebook for all builders. They should go as per that. If they do not follow it, whether the structure is legal or illegal it does not matter, it will collapse. There are proper scientific procedures which need to be followed while constructing. Ethics and ethical builders are crucial.”

Soil can only hold so much weight

The SBC varies from area to area. If the SBC is three floors, builders should not experiment and construct more than three floors. In case of Someshwara nagar, permission was given only for ground and three more floors, but the builder was constructing five more floors illegally. The foundation could hold only three floors. When the weight crossed the limits, it collapsed.

Builders and engineers need to calculate the movable and non-movable load weights. Soil should be adequately tested, the resistance capacity of the soil should also be tested. All these factors are area specific, adds Siddegowda.

According to builders and engineers, sensitive areas for construction where extra caution regarding SBC should be taken are:

This is because the SBC is very low in these areas, the soil being very loose. So the earth has to be filled in the right way, with right materials to increase SBC. High SBC areas are plains, areas on higher altitudes and the areas where earth has been least disturbed – no digging, no excavation and not filled with debris.

Building collapse incidents
19 August, 2013: Wall and pillars of a five-storeyed building under construction collapsed due to which three workers died and eight were severely injured. This incident occurred in Someshwaranagar, Jayanagar 1st block, behind NIMHANS. The builder under question, Mohammed Saleem, was permitted to construct ground plus two floors, but was constructing three additional floors without permission.
17 August, 2013: A labourer died on the spot when a wall of the partially demolished building in R T Street, Chickpet, collapsed on him. The builders were C Chandramma and Savita Jain. The task of demolishing the structure was handed over to contractors Girish and Wasim.
11 August, 2013: The staircase of the three-storeyed commercial complex under construction in BTM Layout collapsed, due to which two workers were seriously injured and three suffered minor injuries.
5 August, 2013: Three labourers died and 11 were seriously injured when the roof of the second floor of a marriage hall under construction collapsed on them at Bunde Mutt layout in Kommaghatta at Kengeri Satellite Town. Around 25 workers trapped under the debris were later rescued with the help of the Fire and Emergency team.
21 July, 2013: Five labourers were injured when the earth at Shivapura construction site near Bagalur, off Bellary Road, caved in. During the time of the accident, the workers were digging the 10-feet deep foundation. The owner of land, Giri Gowda, was constructing a two-storeyed building.
11 July, 2013: Two daily wage labourers died after the 12-feet high compound wall collapsed in Dharma Shekar Layout, Gandhinagar, Kengeri Satellite Town. The deceased labourers and their family members were also working at the same site.

Siddegowda points that mat foundation, which basically is a shallow, expanded continuous foundation, should be filled up the right way. Here, if the ground has been opened up to reach the original geographical earth’s surface, caution should be taken to ensure that resistance capacity of the soil is adequate and if not, steel should be used for strengthening it.

Speaking on the past cases, Siddegowda explains proper scaffolding (temporary structure in the building, made of wooden planks and metal poles, used by workmen while building) at the centre is also important. There is a right system for designing the centre, which should be followed, else the building will collapse. This was what happened in case of the Kengeri building.

When the foundation is laid, concreting for the first 21 days, watering it every day and allowing it to stand with supportive structures is very important. This is when a structure gains maximum strength. For this, sufficient concrete should be laid. The amount of concrete depends on the moisture in the soil.

How to ensure a strong foundation?

Siddegowda points that the Corporation is only the controlling authority. The actual responsibility of a proper and safe structure rests with the builders. “We only approve the plan, put restrictions on the builders and do periodic checks. However, the actual supervision should be carried out by qualified engineers and consultancies. It is advisable to hire a third party consultancy.”

Here is a list of some important points to keep in mind while constructing buildings, even independent houses.

To get a complete idea of how a building should be constructed, read through the National Building Code (click here). For any details and guidance, contact the BBMP engineers.

To check where to report various encroachments including building byelaws, click here and here.

The book by PUCL analyses the entire eviction episode, with the government documents, and explains how a Public Private Partnership can be manipulated. Meanwhile the Lokayukta probe on evictions has headed nowhere, because of ‘lack of records.’

How to keep snakes away this monsoon, in Bangalore

With the onset of monsoon season, low-lying areas like Kengeri in Bangalore have seen snakes entering houses. One more example of man-animal conflict, why does this happen? How to avoid it?

The economics of being a cab driver in Bengaluru

Sridhar, a native of Kunigal taluk, had come to Bengaluru as a teenager nearly 25 years back. After working as driver for a family, for Ola Cabs and for a government department, he is still unable to make ends meet. His story reflects that of many cab drivers in the city