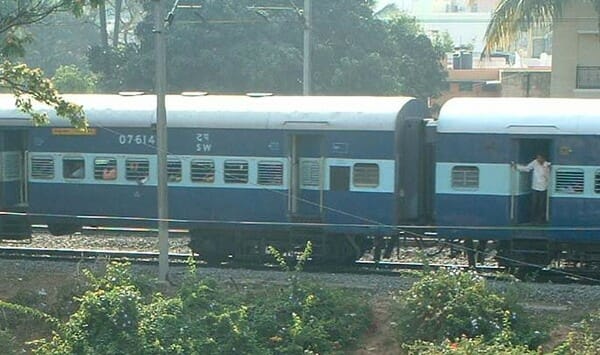 The relatives were visiting from the Tamil country. It was May 1967. The exact dates slip my memory. (They do say that memory is the second thing to go. I don’t remember what the first thing is. Oh, come on! It’s a tried and tested gag!)

In those Good Old Days (when nostalgia was much better than now), booking a train ticket was rather an accomplishment. You had go to the railway station (SBC in our case), get a blank form to fill in, fill it in, and then stand in a queue. Remember that story you were told about how Hanuman’s tail kept growing? You should have seen these queues.

Much pushing and shoving would happen. Insidious attempts to cut into the front would be thwarted by Alert Citizens. Heated words would be exchanged, almost reaching a good ol’ punch-up. Somehow, after waiting for 2.8 lifetimes, you would reach the window and find one of several scenarios: counter closed for lunch; Shift Change; clerk gone off (to restore personal fluid balances or some such – nowadays called a ‘bio break’); clerk ignoring you and contemplating the profundity of The Razor’s Edge; or chatting with a colleague.

When s/he eventually deigned to attend to your application, it was always an attitude of you being a pain in the pinnālé. The clerk would open a huge ledger with many columns spread across the pages, like a centre-fold for sexy tables. Then there would be business of frowning and scanning the tables to see whether berths were available. If so, even more frowning.

This already complex process became even more so for the Island Express. Its destinations when leaving from Bangalore were many and this was even more of a pain in the pinnālé. And then, entries would be made in the ledger. A small cardboard ticket, about 1” x 2”, with barely legible printing on one side would be flipped over, and on the pinnālé would be tightly written the passenger’s name, gender, and age – the last two enclosed in circles so they wouldn’t wander off.

Double and multiple bookings were rampant, and you were never sure whether your seat/berth would not be contested.

Anyways, Uncle tried to get tickets booked for the kinfolk’s travel back to Tiruchchirapalli by Island Express. (Aside: it was from this name that I learned the concept of “silent letters” in the English language!) Sorry, tickets not available for dates requested, but available for a few days after. Duly booked.

Uncle and I were disappointed that we couldn’t get the original dates because Uncle Jeremiah would be driving the Island Express on that day. Uncle and I could have met him, ridden up to BNC (kantrumentu, to be precise) in the engine with him. In the event, this did not happen.

The day of the originally intended journey came. Uncle and I commiserated about missing a ride in the WP.

The next morning, we awoke to grave news.

The Island Express had met with an accident and hundreds had died. In panic, we tried to find out what had happened to Uncle Jeremiah. As near as we could tell, he was alive.

We found out from our other railway friends that the brakes had been troublesome even as the train left Bangalore. He asked them to give him a different engine at BNC. They said, just manage until Bangarapet, we will give you a different engine. (His link would end at Jolarapettai.) He managed with clever use of the reversing apparatus to get the train to Bangarapet, up to which station the train was a passenger train – it stopped at every station.

In Bangarapet, they said manage until some other station. But as he approached a station after Bangarapet but before Kuppam (I don’t remember which one), and tried to slow the train down, he could not and the train just went through. A red light was waved from the engine as the train hurtled through the station. The Station Master immediately got on one of those “wind up” telephones, cranked it up and alerted the Station Master of the next station. Emergency arrangements were made for the train to pass through and in Kuppam, the tracks were switched to the emergency buffer track that many stations had (more of them do, now). You will have seen these, the tracks kind of go into a soil bank, and a barricade sits there blocking the track.

The train hit this barricade at Kuppam. I remember hearing that several of the front bogies just shot up into the air and came crashing down. My memory is of 600 fatalities.

As the train hurtled in approach to Kuppam, Uncle Jeremiah ordered his two assistants to jump and save their lives. After a bit of arguing and being told to take care of themselves and leave him be, they did. And survived with some injuries, if I recall rightly. He stayed in the engine to the last. Injured. But alive.

The railway enquiry into the accident dragged for over two years. He was initially on half pay for a year and then, no pay at all. The entire railway employee community, especially the drivers, in Haffieldpet, Arakkonam, pitched in to support the family.

For a couple of years or so, I used to spend Christmas in Arakkonam and could see how the family was struggling, but with such dignity.

At one point during the enquiry period, Uncle Jeremiah had come to Bangalore for some work. My uncle Gurunath brought him home for dinner. I vividly remember, after dinner, as goodbyes were being said, amma was practically in tears. Appa was somber. Uncle Jeremiah’s comment: “Enna pandradhu? Kadavul kailey irukku.” (“What to do? It’s in God’s Hands.”)

He was eventually cleared of any wrongdoing. I believe his arrears were paid to him, though I don’t know.

I don’t know what he did subsequently or where his family is now. I fondly remember how gracious and generous they were to me when I used to visit their house, amid their own troubles.

I wonder where he is now.

From food supply to information sharing: How a citizen collective is helping Bengaluru deal with COVID-19

As soon as the first COVID-19 case was reported from Whitefield, the citizen collective Whitefield Rising started responding. They have sourced accurate information for residents, supplied essentials to migrant labourers, and so on.

Bengaluru is losing all its iconic theatres to multiplexes

It is sad to see so many leading theatres which entertained lakhs of locals for decades are no longer functioning. Kalpana, Gita, Minerva and the like have vanished from the scene.