After the students graduate in Masters in Physical Education, they are required to clear the National Eligibility Test (NET) in order to apply for jobs in primary and high schools for the post of PEd teacher.

There is only one college affiliated to BU that provides the course of MPed, University College of Physical Education. The college has one ground where students train in multiple sports. The SoftCopy caught up with few students of this college.

Anand P, a second-year student who is specialising in cricket, said: “The ground has to be improved—it has lot of stones which lead to injuries when we train.” He added that the students are not provided with enough nutrition even when the work load is very high. 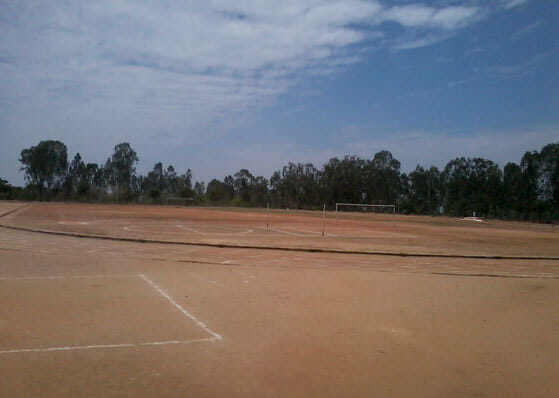 The ground provided to the students of physical education to train at BU Pic: Sakshi Gupta

Asked if they had tried talking to the faculty and the administration about the below-par pitch, a student who wished to be anonymous, said, “If we complain they can just reduce our marks in the internal exams.”

Chandrashekhar, second year student of MPEd, said, “It is all about how the university manages the department but they are not doing their job properly.”

The part of the stadium that is called the football ground was poorly constructed. Again, the issue of a lot many stones present there comes in, and it is not suitable for regular running.

Venkatesha, a student specialising in football, said, “The construction of the ground is in the wrong direction, southwest, when we actually need it to be in the northwest, like in Kanteerava Stadium.”

Another problem the students have to contend with is that the swimming pool has not been usable for the last five years. So choosing swimming as a specialisation in the course is not an option even though there are students interested in taking up swimming in their course.

K K Ammarnath, assistant professor of physical education at the college, said: “The swimming pool is closed for renovation. The estimation has been taken already so the work will start soon.”

Asked why renovation of the sports facilities had not started, he said, “I don’t know, the principal will be able to answer this question.”

R Srinivas, principal of the college, said, “Here students are trained to become physical education teachers and not sports persons, so the provided facilities are good enough.”

On being asked about students are made to clean the ground, he said, “The first and foremost learning they should have is to respect the ground.”

Ravinder Reddy, physical education teacher of Sherwood Public School, said: “It is always said that a coach need not be a player, but he needs to have full information about the fundamentals of the sports and the scientific approach to it.”

He adds that the students should be given all the facilities so that they can design an idea about a sport in mind which can make them strong in their future designation. This situation in the college makes it difficult for the students to train themselves well, which affects the outcome.

About Sakshi Gupta 1 Article
The author has not yet added any personal or biographical info to her or his author profile.

The latest in the controversy over non-payment of salaries to pourakarmikas, objections to certain proposed corridors and a collaboration with Japan to install smart traffic signals across the city — did you catch all this on the papers over the week gone by? A quick recap of these and other pertinent news from namma Bengaluru.