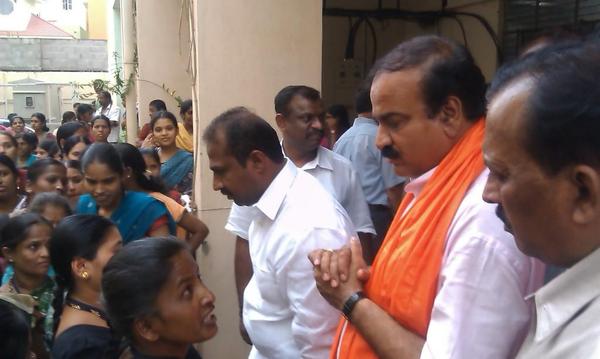 He has been contesting elections for over five terms from Bengaluru South Constituency. Ananth Kumar, started his career as secretary of Akhila Bharat Vidyarthi Parishad (ABVP). As a minister in the Vajpayee government, he held many key positions such as Minister of Civil Aviation, Tourism, Sports and Youth Affairs, Culture, Urban Development and Poverty Alleviation. (Check out his full profile)

He has been actively connecting with people through social networking sites like Facebook and Twitter. He also has his personal website. Citizen Matters caught up with Ananthkumar on a rainy day during his campaign at an apparel factory.

Everybody takes credit for Metro, including you. To whom should the credit actually go to? Is it an individual, or a team work?

When I was Urban Development minister in 2001 and 2003, I rolled out urban transport policy for the entire country. We identified 50 cities for laying of the Metro. In this, I sanctioned Detailed Project Report for five cities: Bengaluru, Hyderabad, Ahmedabad, Lucknow and Mumbai. After this, we also commissioned Delhi Metro Rail Corporation and appointed E. Sreedharan (Managing Director of Delhi Metro Rail Corporation) to be the consultant for Bangalore Metro Rail Corporation Ltd. I as an Urban Minister contacted the Japanese Bank of International Cooperation and brought in the loan and equity, because of which the Metro has started rolling. I was the only person who became the Urban Development Minister from Karnataka in last 66 years of independence.

Bangaloreans have been asking for Commuter Rail Service (CRS) for quite a long time. What are the reason for the delay?

There is no problem, first the Metro needs to be completed. It will be completed soon. Metro is limping because of 10 years of UPA government’s slow pace. As soon as Narendra Modi’s government comes to power, I assure people of Bengaluru that within three years we will complete first phase and second phase of Metro.

Then when shall we see CRS?

The Jagadish Shettar-led government said, “Look we want the Suburban rail. For this the state government will share 50% of cost”. Nowhere in the country, for railway project any state government has given any money, but here we are ready to give 50% of it, but it is in cold storage — why? That question should be definitely asked to Khargeji. But at the same time, I’ll assure you because the planning is ready, DPR is ready, we will make this happen.

How can an MP be helpful to people who are affected by development projects? Take the  example of the Bangalore Metro, where you organised a public rally? What finally came of it?

It was not a rally, it was a public interaction. Whenever there are problems because of development, two things are very important: relief and rehabilitation. We organise such meetings or dialogues with the affected people. Such an initiative makes the government take part proactively to help them. As an MP, it is my duty to organise such dialogues and I have done that. Lot of things churn out of such interactions. I can give you a list of x number t of victims and the help that has been given.

Can you give us one or two examples?

I don’t remember but… (talking to his PA) Give her a list of project-affected people and what is the compensation given because of our intervention in Metro.

Would you support the mega SEZ project coming up in your constituency that violates environmental norms?

We have to take a balanced view. We want development, at the same time environment is precious. Therefore any project, any SEZ is welcomed with consideration to environment. Environment considerations are paramount.

What is your opinion on eliminating corporate lobby and corruption?

How much of mid-day meal programme by your NGO Adamya Chetana is being funded by government? How much by donations?

It is completely funded by the government — by Government of Karnataka and Government of India by large. It even gets donation from philanthropists.

How are you funding your campaign? Personal money or party money? Or donations? By whom?

Look, there is a limit by Election Commission and all the elections I have fought is on public donation.

Do you try to make it public?

Always accounts are made public. The accounts are filed before the Election Commission, which is a public document.

Why do you want to do away with Aadhaar card if BJP comes to power? If you scrap the scheme instead of finetuning it in a beneficial way, wouldn’t it be a waste of public money?

For Aadhaar, you have to be an ordinary resident of India for 11 months. Therefore, all the infiltrators — more than 3.5 crores of the people who cross the Pakistan, Bangladesh, China borders — everybody can easily hold an Aadhaar card. Therefore, what the BJP is saying is that we require a national register of citizenship. Based on that, we require a citizens card, not residence card. Residence card is a threat to the security of the nation.

Isn’t it an impossible task to filter the migrants from getting enrolled into citizens’s list?

It is very easy, because nationality is not a declaration. Nationality is by determination. Those people who are not citizens will not be given citizenship card. An appropriate designated authority should say that X person is a citizen of India. Then only that person will be given citizenship. Every Tom,Dick and Harry — whoever applies — will not get a card. We will come up with ways and means. We will see to it that the verification is done through the police station.  We all have to create a methodology for that. I don’t think any country will allot a citizenship without verification. Even a green card for US citizenship, Indian citizenship is not given just like that like an Aadhaar card.

Will you apply checks that are applied in US?

No, we shall apply checks that are applicable in India for Indian citizenship. There is a verification process and procedures are already in place. There is a difference between citizenship and residentship. For anybody who is a foreigner, to allot citizenship to Sonia Gandhi, Indian government used a procedure. The same procedure will be applied to other people also, whoever wants to become the citizen of India.

Will you take Rajyasabha route to go to Centre if you lose and your party wins?

There is huge wave for BJP, Narendra Modi and Ananth Kumar and fortunately by god’s grace I have been getting elected in a direct election consecutively for five terms. I have got 100% faith in the electorate; they will elect me again.

What will be your place in Modi government if it happens? Urban Development or Civil Aviation Minister again?

When elections are over, it is up to the PM of India, Narendra Modi to decide what responsibility he should give to Ananth Kumar. Whether a governmental or organisational role or whatever I will be assigned, I shall play that role.

How do you justify the re-entry of Yeddyurappa to your party?

He is mass leader, a popular leader, he is a kisan leader. When he went away from the party, we lost those voters. When he came back, our unity got strengthened, with this unity we will defeat Congress.

Doesn’t his bad name affect the party’s reputation? All have been asking this question including media.

Look, media trial doesn’t decide anything. In our country, it is the rule of law. Only courts can decide that X is a culprit and X is not a culprit. Media cannot decide who is correct or wrong, only courts; the judiciary will decide.

What is this HUDCO issue? Was that a scam at all? What happened exactly? And what is the current status?

Actually I want to know what is that? If you have any details, I would like to hear about it. I don’t have the habit of answering to baseless allegations. For more than 15 years, Congress is making that allegation. How many years they were in power? A small 10 years, 2004 to 14. In these 10 years what investigations have they done on a frontline BJP leader? What have they found out? If they haven’t done any investigation, I’m surprised and even you should be surprised. If nothing has come out, it means they are making baseless allegations.

There is not much material available on public domain on the issue. From old news reports, it appears that when Ananth Kumar was the Urban Development Minister in the NDA regime, a HUDCO loan to the tune of Rs. 14,500 crores was given, where it was alleged that three part-time Directors of HUDCO sanctioned loans amounting to Rs. 5,000 crores to 50 corporate houses in a day in the absence of a single permanent Director. However, Kumar’s involvement in the ‘scam’ has never been proved, with the CVC and CBI closing the probe for the want of evidence. The CVC/CBI closure report isn’t on public domain. Therefore we wanted to know the truth from Ananth Kumar himself.

We are waiting for a detailed clarification on the issue from Ananth Kumar’s office on the issue itself, which is not on public domain yet. This will be updated / a fresh write up will be written once we get it.

BBMP polls to be held before August 2015

Check your name on the voter list, and be prepared for the BBMP elections soon. Here’s what happened in the Supreme Court on Monday.

Good road, clean water, waste disposal: Corporator ensures it all, not the PM!

While we’re busy talking about national politics, the problems we face in daily life are local in nature: The garbage, the potholes, bad roads, power, water – everything.

How much did BBMP spend on Kodigehalli ward? What are the issues troubling the ward? How much money is pending to be paid to the contractors?