Sathish Reddy, a two-term MLA from Bommanahalli, has a number of infamous spots in his constituency. The notoriously congested Silk Board junction, Karnataka Composting Development Corporation (KCDC), Agara lake and Puttenhalli lakes are a few of them. His constituency also makes news every time there are heavy showers, inundating the residences with water some times as high as four feet. During one such episode, the MLA got into a verbal altercation with a senior forest official Deepika Bajpai and had threatened to slap her which made headlines.

Reddy has an agricultural background and is known to have real estate dealings. His political innings have seen him hold the position of chairperson of Standing Committee, Bangalore Zilla Panchayat.

The high school pass leader is known to engage regularly in civic matters as he has some of the more active citizen groups in the city. He has started projects to help garbage segregation as part of his personal initiative, and has been active in getting leaf composting units in parks.

Satish Reddy in the Assembly:

Satish Reddy in the news

July 10, 2014: Unable to find adequate land for garbage disposal, the BBMP directed MLAs to allot land for dumping in their respective constituencies. Bommanahalli MLA Satish Reddy had identified land in Nayanapanahalli and Somasundarapalya already when the state was ruled by BJP.

October 30, 2015: He took up the issue with BBMP on the overflowing garbage at the KCDC plants, spreading stench and causing health hazards to the closeby HSR layout. Reddy supported the citizens need to protest the atrocity.

November 1, 2015:  Amidst the 500 protesting residents from the surrounding areas near the KCDC plant, MLA Satish Reddy said that garbage trucks are coming in from other constituencies, leading to a garbage-overload initially supposed to  be handled within individual constituencies.

December 29, 2015: HSR layout residents wrote a letter requesting the CM, Bommanahalli MLA and BBMP officials identifying all the bad roads, and marking potholes in their areas on google maps.

January 2, 2016: The MLA accompanied BBMP officials on an inspection of apartment complexes to check citizens consistency in segregating waste and touted the wards under his supervision as a model to be followed in the city.

July 17, 2016: At a press conference, the MLA told aggrieved residents that the first phase of the Bannerghatta road widening project consisted of six roads. He said the number of properties acquired under Transferable Development Rights (TDR) is still going to be decided in the cabinet meeting.

July 30, 2016: The MLA claimed that the stay order sought by residents in Duo Enclave Layout around the Hulimavu Lake had actually  led to flooding in the area. The SWD was not constructed due to the order being given without checking ground realities.

September 3, 2017: Residents of Sector 7 in HSR layout staged a protest to find a solution to the water-logging problem due to heavy rains. The MLA responded promptly to their call in the emergency situation and called workers to remove the roadblocks causing flooding.

October 3, 2017: An Indian-American woman had to seek help from the US Consulate as her house was flooded six times during the last year. She could not reach either BBMP officials or the incumbent MLA of HSR layout.

November 6, 2017: HSR layout residents complained about the apathy shown by MLA Satish Reddy in the election year. In spite of them bringing to attention the many problems plaguing the locality, especially flooding during rains, he remained insolent.

November 11, 2017: While the BJP was looking down on Tipu Jayanti celebrations, the Bommanahalli MLA had his face plastered on posters at an event organised in Bengaluru. He said he would respect the party’s stance but has no problem with such celebrations.

January 1, 2018: A special task force set up by citizens in HSR layout, communicated many times to the MLA about the low-lying areas affected by unkempt storm water drains.

February 1, 2018: The MLA failed to completely deliver on his promise of installing 20 CCTV cameras. Only five are functioning and not placed in the appropriate locations.

February 28, 2018:  Reddy has been turning a blind eye to land encroachments in his constituency, alleges HSR Layouts Resident Watch.  He also promised to build a herbal garden near the fencing of Subhramanya temple.

August 9, 2013: His daughter, Gagana Reddy, committed suicide by hanging herself after having an altercation with her younger sibling.

August 7, 2015: The MLA was booked on charges of molestation by the Koramangala police station. The victim is a wife of a well-known doctor in the city.

July 30, 2016:  He threatened to slap and break the teeth of Deepika Bajpai, Deputy Conservator of Forests when she spoke about the encroachments around the lakes in Bommanahalli and Kodichikkanahalli areas. She reasoned that homes illegally sprouting on lake beds to which the MLA took offence.

April 3, 2018: An interview of Satish Reddy by Janapra Media.

March 10, 2016: Satish Reddy led the BJP Councillors to protest in the Council, against the alleged partiality in distributing Chief Minister’s Special Relief Fund.

April 19, 2018: In an interview Satish Reddy says Amit Shah has changed the style of functioning of BJP. ಸತೀಶ್ ರೆಡ್ಡಿ ಸಂದರ್ಶನ

How did Satish Reddy use his MLA funds?

Every year, an MLA is given Rs 2 crore, to spend on developmental works in his constituency. He should allocate the funds for government, community and health infrastructure.

Satish Reddy has spent about Rs 7.34 crore, which works out to 73% of the funds allocated to him.

His biggest expense seems to be construction of water units, for which he spent Rs 1.45 crore. However, the allocation of funds does not seem to be equitable. He allocated Rs 15 lakh each to construct “clean water units” at six places, whereas at two other places, he spent only Rs 10 lakh for the same construction. For “drilling of borewell, pumpset and energisation”, he appears to have invested Rs 6 lakh each at five places.

The next big expense is for road improvement. There is a difference in the range of expenses. For “C.C Road and R.C.C Drain in APR Layout”, the expense worked out to Rs 16.5 lakh. Road repair work was allocated Rs 40 lakh, while other “road concrete” works were given Rs 10 lakh to Rs 15 lakh each.

About 14 items list the CCTVs that have been installed at Rs 2.5 lakh each. But only one item that talks of the “construction of different cameras at different locations” is said to be costing Rs 15 lakh. Purchase of three-wheelers to help the disabled is also strangely priced at Rs 78,000 to Rs 88,000 each, while the actual cost of such a vehicle ranges from only Rs 14,000 to Rs 22,000. 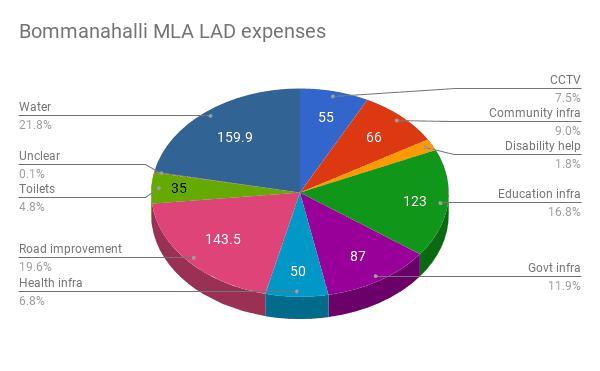 Priya Krishna, INC, won the 2009 Assembly bye elections from Govindrajanagar by about 5000 votes. This first MLA and son of a current MLA, is not only the youngest in the Karnataka Assembly but is also the richest. Read more about his assets, his performance and utilisation of funds for constituency development.

HC orders BBMP elections by Dec 31, but reservation issue yet to be resolved