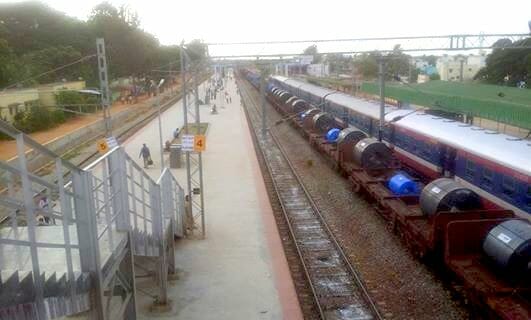 During the now-concluded BMTC and KSRTC staff protest in Bengaluru and Karnataka, the South Western Railway came to the rescue of Railway passengers by providing stoppages for All Mail / Express Trains at Baiyyappanhalli,  Nayandahallai, Kengeri, Whitefield, Channasandra, Carmelaram in both directions. This basically helped railway commuters to get down or take trains at areas close to their residences of offices instead of struggling to reach Majestic or Yashwanthpur by private or hired vehicles, in the absence of BMTC buses.

This goodwill gesture by the South Western Railway in such a short notice has earned them a good name. This is also an indication of how easy it is to have extra trains that encircle the city, to reduce congestion – it’s a big case for suburban railway.

As Railways have shown, it is possible to provide stops for all Mail / Express trains at these suburb stations, these stoppages of trains need to be made regular with little efforts, which will benefit lakhs of Intercity Railway Commuters, even commuters in and around Bengaluru, in the absence of these, they are forced to go to Majestic / Yashwanthpur and again return by Taxi / BMTC buses / own vehicles.

These stoppages will benefit everyone: Railway Commuters, roads at CBD area and the Railways. Congestion at City Railway station will come down drastically. This will reduce road traffic in CBD core area as less intercity commuters will be travelling from the city center. Intercity commuters will spend less time in reaching home or catching train, hence their travel cost within Bengaluru will get reduced. Indirectly, total Intercity travel time of Railway Commuters will come down by 1 to 2 hours.

These Railway stations are surrounded by well-developed residential areas, IT hubs, industrial hubs and commercial activities. If Bengaluru needs to grow further, these railway stations need to be developed systematically and should provide stoppages for all Intercity trains.

Like at Whitefield Railway station, they can provide stoppages for even Double Decker, Shathabdi, Durunto Trains which carry maximum passengers. Good percentage of the commuters in these trains will have Whitefield and around areas as their destination.

These railway stations have some of the basic amenities and need to be developed further by railways or by using CSR funds from the IT companies for handling all Mail / Express Trains. It’s time for South Western Railways to exploit these big stations into major transit stations for both Intercity Commuters and Suburban Rail passengers in terms of economic activities so that Railways can generate more non-fare revenues to sustain. These will be win-win for every one if the Railways can extend and make use of these stations for Mail / Express train permanently.

About Sanjeev Dyamannavar 4 Articles
The author has not yet added any personal or biographical info to her or his author profile.

GAIL has dug the roads in HSR layout in Bengaluru to lay pipelines. But the repair is taking time, due to various reasons. Ultimately citizens are paying for the mess.

Focus will be on education and health, says Bhaskar Prasad