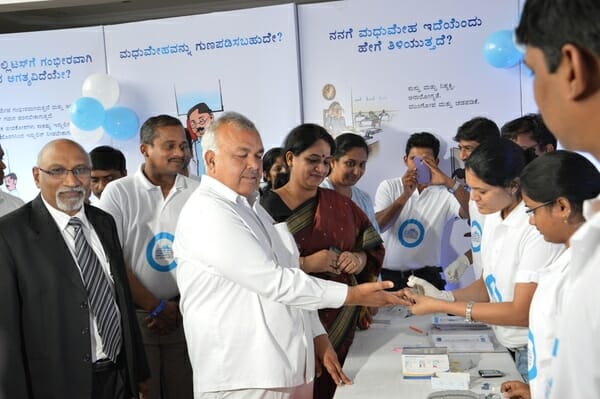 Editor’s note: On the occasion of World Diabetes Day, BMTC launches an awareness campaign on diabetes prevention, detection and management. The campsign will target 35,000 bus drivers and conductors across Bengaluru. A special ‘Changing Diabetes’ bus will also travel through the city to create awareness about diabetes.

Driving on Bengaluru roads can be stressful, often leading to major and minor accidents in the city, more so if you are hypoglycemic and ignoring symptoms such as hunger, sweating, dizziness and others. While the city’s population has grown multifold due to the opportunity that it provides, BMTC plays a major role in keeping the sanity on the road through its public transport system.

At the heart of this system lie the drivers and conductors who are constantly behind the wheels, manoeuvering the narrow and congested lanes of the city to ensure citizens reach their destination peacefully. In such a scenario, it is critical that we ensure their health is in order so that they are able to continue driving safely and without any health hazard.

35,000 drivers and conductors to have a free diabetes check-up

The campaign will target 35,000 bus drivers and conductors on across depots in Bengaluru. Lauding the initiative taken up for bus drivers, Reddy said, “Diabetes is a serious problem facing people across India. This is a massive initiative. We need programmes such as this that can reach out to people at grass-root levels and bring more and more people into the fold and create an environment for a diabetes-free state.”

On the occasion, a ‘Changing Diabetes’ bus was flagged off carrying messages about diabetes. The bus will travel the length and breadth of Bangalore, creating awareness on diabetes management and control.

Speaking on the occasion, Dr. Ekroop Caur, IAS, Managing Director, BMTC, said,“As we grow to make BMTC sustainable, people-centered and the first choice for travel, the health of our drivers is of paramount importance in helping us achieve this vision. Unassuming as it appears, drivers in fact are doing the most stressful of jobs by providing safe and comfortable transport to its citizens in the most hostile traffic situations. In such a situation, it is easy for drivers to be prone to several health hazards, including diabetes, which can lead to serious repercussions.  Therefore we have decided to partner with Novo Nordisk India on this cause to not only create awareness, but also conduct a diabetes check-up for all the drivers on World Diabetes Day.”

In an attempt to encourage and motivate more drivers to follow a healthy lifestyle, five drivers were felicitated by Ramalinga Reddy for having successfully managed and controlled their diabetes in the most stressful of conditions.

”With 65 million people living with diabetes and numbers rising with each passing day, there is an urgent need from stakeholders, including the government and private parties to create a conducive environment and infrastructure for proper diagnosis and management of diabetes in India. Diabetes not just complicates everyday living; it also puts the affected person at strong risk of complications of the heart, kidneys, eye and feet among others. As we continue to find ways to contain the ramifications of this health disorder, it is critical that we reach out to different segments of the society and address their concerns at the grass-root level. Bringing drivers into the awareness fold was a conscious decision in this direction,” said Melvin D’souza, Managing Trustee, Novo Nordisk Education Foundation.

The event saw employees from BMTC and citizens throng the diabetes village that was set up for the occasion. It included demonstrations on how to manage diabetes and take preventive steps in order to control the condition.  Apart from educating and creating awareness on diabetes, people gathered were also made to understand the right values of healthy living.

World Diabetes Day is celebrated on November 14th–the birthday of Frederick Banting, whose work with Charles Best led to the discovery of insulin in 1921. The day was first introduced in 1991 to raise awareness about diabetes: its causes, its prevention and the devastating effects it has on human lives and healthcare systems worldwide.

Novo Nordisk is a global healthcare company with 88 years of innovation and leadership in diabetes care. The company also has leading positions within hemophilia care, growth hormone therapy and hormone replacement therapy. Headquartered in Denmark, Novo Nordisk employs approximately 31,400 employees in 74 countries, and markets its products in 179 countries. Novo Nordisk is synonymous with Diabetic Care in India. Novo Nordisk has introduced products and services hitherto not seen in the area of diabetes care in the country.

Novo Nordisk’s history of taking action on World Diabetes Day in partnership with the IDF goes back to 2007, shortly after November 14th was recognised as an UN-observed day. In 2012, this partnership brought more than three million people together from all over the world, including people with diabetes, Novo Nordisk employees, decision-makers, healthcare professionals and the general public.

The content has been provided by Latha T S on behalf of BMTC , and has been published with minimal edits under the Message Forward section, a space meant for non-profit public interest messages by individuals and organisations.

From potholes to sewage mismanagement to polluting industries — a recap of recent headlines on burning issues for Bengaluru that you may have missed.

B.PAC has launched the Green Ambassador Program, a 6 month internship program for college students, to create interest and awareness on urban environmental issues.