I used public transport for the first time in the city this July, as I had to travel to Kempegowda Bus Station (Majestic BMTC City Bus Depot). As a complete newbie bus commuter in Bengaluru, I had an internship assignment to look at BMTC’s communication, and their interfaces and evaluate the overall usefulness.

My mentor, from Co Media Lab, had suggested I use all mediums of communication available to me whether it be the BMTC app, Google Maps, or even physical brochures. A new perspective, he said, probably had a better chance of picking out certain gaps in the system, than a veteran user who is simply accustomed to the flaws. So, let’s take a look at my observations and experiences combined with inputs from more experienced riders. 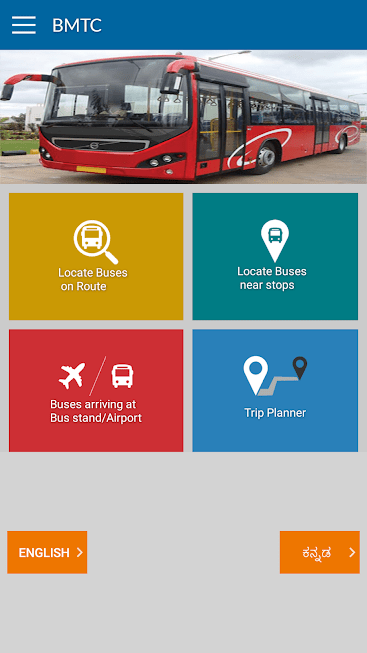 It had a reasonably user-friendly interface that allowed usage by newbies (like me) even without knowledge of the names of specific bus stops. Its search capability not only supported bus stop names but also place names and offered suggestions using your current location – which works unless there are far too many choices close to you, at which point you have to search up which bus stop suits your trip best.

However, the app has very limited awareness of the various buses on the route and it was just far easier to get to the bus stop and take any bus with a quick question to the conductor.

One functioning and useful feature within the app that I did use was the route map feature, which allowed me to track the position of the bus within our route, which allowed me to relax without constantly paying attention to the conductor and his stop announcements. It would have been good, if it also had mentioned bay/platform number at the depot.

The information available here is similar to the trip planning portion of the mobile app. I didn’t use it much pre-trip due to the heavy overlap with the mobile app. After all, I do believe that they get the data from the same source – BMTC’s ITS.

LED Board outside buses

This was an extremely useful route communication medium with the final destination and route number clearly displayed (far more relevant than the one inside). It was also functional on all the buses I boarded!

LED Board inside the buses

The board was dysfunctional in the first bus I got into with the board displaying the text “Destination is:” followed by no name. However, it was functioning on a few buses that I encountered later. On most other buses I got into, the board simply displayed “Welcome to BMTC” which is practically speaking, not an effective use of a potential communication medium!

Nagesh Aras, an expert on the BMTC’s bus system and a regular commuter for close to a decade, says while he does consider LED signage to be the most useful method of communication, there are issues. He says, “sometimes the stop names are off by one stop causing passengers to get down at the wrong stop. Plus, different buses have different stop names and different spellings to describe the exact same place! For instance, Domlur transcends to Domaluru or even Dommalure, while KR Market is simply “Markettu” in some buses. Similarly, the Command Hospital somehow always shows up as “Commando Hospital” while the “Paradise” bus stop refers to the Ecospace stop in some buses and to the Akme stop in others.”

The conductor is certainly the most reliable source of route information on where to get off the bus if a transit is required. However, in my experience, he did not give me specific suggestions with regards to bus numbers although I immediately found the right bus when I got down to change routes (obviously because Kempegowda Bus Station is an extremely popular destination!). A little more pre-trip planning from other online sources to get an overall idea of which buses to take might help.

The key thing is that the conductor would likely be busy on crowded routes so it would be hard for him to respond to a newbie like me, especially in the non-AC buses. Nagesh Aras noted that new people often ask the conductors about stops and popular spots nearby (including corporate parks, malls, etc). He says that, if it is on the specific route currently being used, then the conductor can usually offer some useful assistance. However, it is mostly other passengers who offer the best help – even though many are sleeping or wearing headphones! He advises, “don’t be shy – call out (to other commuters) loudly and draw  attention and most certainly, you will get the help you need!”

The ticket slip shows standard information such as your pick-up/drop-off point, fare, and bus number. Since the names given are official bus stop point names, they easily match with online route information mediums such as Google Maps and the BTMC app itself.

The bus number can also be entered into the BMTC app to begin tracking (which I found quite useful when I missed the bus number outside). Apparently, this problem of missing the bus number outside is a common one for inexperienced users and theoretically, the bus number is supposed to be painted at two places inside the bus – at the front of the bus and on the backside of the LED display. However, this is often deliberately defaced or missing altogether notes Nagesh Aras.

Most stops did not have maps, however, the few which did offer them showed your current location with relation to the rest of Bangalore. This is not very useful if you have access to any of the online mediums.

Platform boards at the depot

The physical printed boards had clearly written bus numbers and destinations on the boards, although I definitely found it far too tedious to track. The electronic display offered a more dynamic alternative to aggregate the information. They looked like airport-style route information (bus number+destination) boards and were present at regular intervals on the platforms.

Nagesh, however pointed out that the communication design for this display type is far from convenient as the names are not arranged in any useful order (alphabetic, region-wise, etc) but are instead arranged by route number – which requires some prior knowledge to quickly search up the exact bus you want; The same problem applies for the platform arrangement as well. He says, “Suffixes too have no particular meaning (335, 335T, 335ST) although the shared number signifies a shared direction/route. Most importantly, the buses almost never arrive or leave as per the displayed timing and this makes most boarding information unreliable whether it be on the BMTC mobile app or the electronic depot displays.” Once again, advantages of impromptu actions such as physically asking fellow passengers (more experienced) simply outweigh those of more formal information systems attempted by the BMTC. 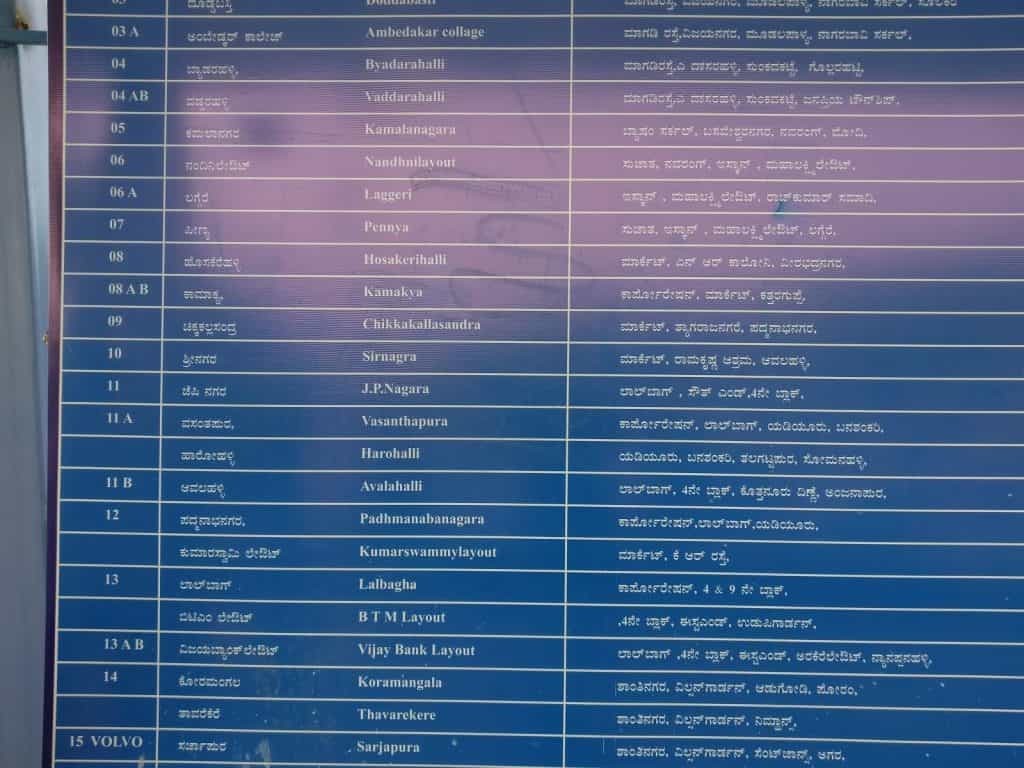 I found the display on top of the platform extremely useful as they are easy to view from the central bridge at the depot. They contained the destination name for the bus parked at that platform (at least in theory) – in practice, the buses might not have been exactly at those positions although from my experience, it was reasonably accurate. It also contained Vajra vs Ordinary classification allowing for easier access to the former considering there was only one line (I could see) of this variation.

There are large maps which used a grid system paired with a coded list (alphabetically arranged) to represent most locations in Bangalore and provide you with the main bus number for that route. Multiple routes would have been more useful. Ironically, the “You are here” star seemed to be completely wrong in the map near the information centre with the station being shown near Bellandur! However, it turned out that the large star was an oddly placed key and the tiny star near the center accurately represented the station. 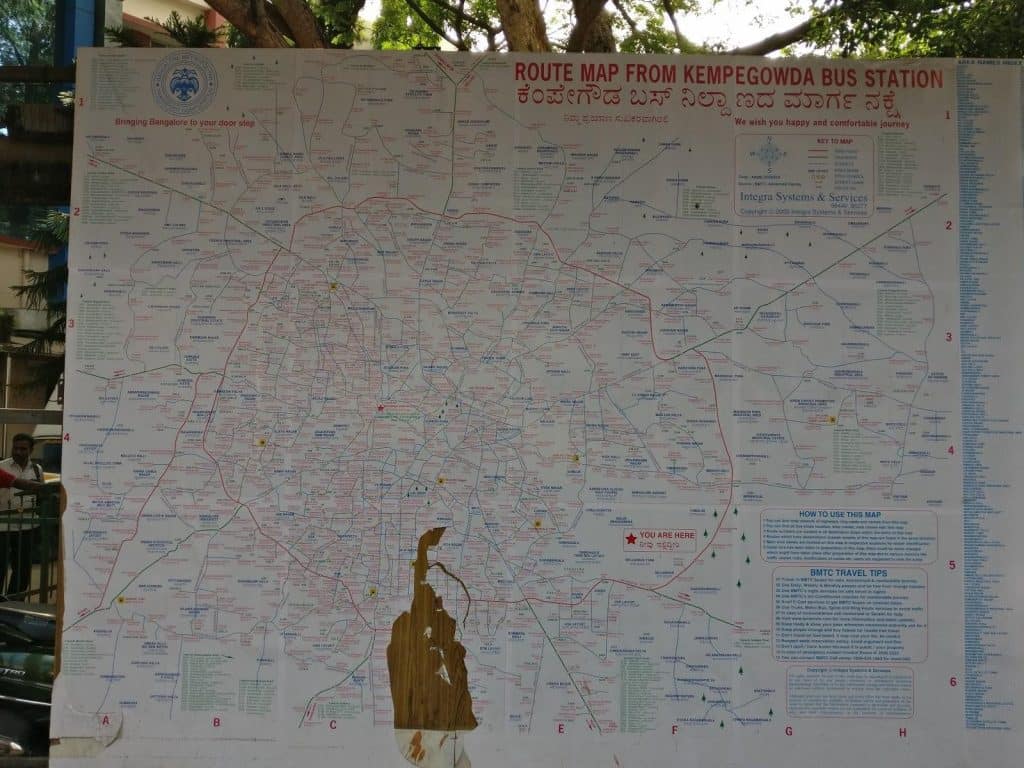 Nagesh says the information system is incomplete. “Ideally, you should be able to locate your platform and an array of bus route options – but in this case, you can locate neither”, he says in disappointment.

The help desk staff only spoke in Kannada which would be a concern for non-Kannada speakers. I asked for a map, but it looked like there were none available at the time.

One person asked for route information and seemed to get an appropriate response (a bus number). The key problem – I couldn’t find any clear signs that led me from the bus bay to the kiosk! On the whole, it was not designed to be as useful as other means of communication.

Google Maps versus BMTC app for route info and tracking

Level of communication in Vajra vs Ordinary

About Vikhyath Mondreti 2 Articles
The author has not yet added any personal or biographical info to her or his author profile.

Time for a Solid Waste Management board in Bengaluru

The SWMRT group proposes a way for waste to be managed, in the interests of pourakarmikas, citizens, environment protection and civic efficiency.

Painting the town red, green, yellow and every other colour

Sugandhi recounts her experience at Neralu and refers to the city’s beloved trees as Bangaloreans too.

“Fine” encounter with a traffic policeman

It pays to be honest, even when you violate traffic rules, finds a usually careful driver.