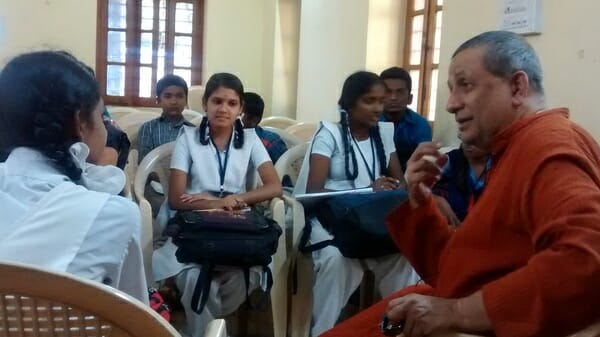 Bengaluru Bus Prayaanikara Vedike (BBPV) organized a Makkala Adalat on the experiences of children and the concerns faced by them everyday in BMTC buses. The Adalat saw participation of children from schools across Bangalore sharing their concerns while traveling in buses in the city. A panel of officials and social activists responded to the issues raised by the children. The panel consisted of Shyamala S, Assistant Traffic Manager, Public Complaints, BMTC ; Nagaraj V, Divisional Traffic Officer, BMTC; Prahlad, Secretary, KSRTC and BMTC Staff and Workers Federation; Manohar, Human Rights Activist; Nagasimha, Child rights Activist from CRT.

The proceedings started with a presentation of a study done by BBPV on issues faced by children who use buses. Later some of the children who participated in the study as well as other children among the audience shared their experiences and concerns.

One of the main concerns raised was that buses do not stop for school children. Many of the participants said that this is because the conductors and drivers have revenue targets everyday, and since children have annual passes and do not buy tickets and add to the daily collection, buses do not stop for them. BMTC officials maintained that such practices do not happen, although several children and people from the audience asserted that this continues to happen.

BBPV members in the audience spoke of an audit they did a few months back from Hennur Road to Tannery Road, which had four schools along the route. The members narrated an incident during the audit where they saw 50-60 children running after buses which didn’t stop at all for them.

Amritavarshini, a class 8 student from Government High School, IISc, spoke of how the buses are late on several days and as a result they get late going to school and they then get into trouble in school.  Devikiran, a class 8th student spoke of how adults sometimes force the children to give up their seats so that the adults can sit. The children were unanimous in asking that the number of buses be increased. Several children also spoke of how conductors and drivers are rude to them and scold them. Shabrin Taj, a student who lives in Beedi Colony near Kengeri, shared a shocking incident, where she was physically assaulted and slapped by a conductor for not being able to move further inside in an already full bus.

Most of the children said they don’t like traveling in buses because its crowded and they are treated badly by conductors and drivers and adult passengers. However, some of them also said that they enjoy traveling by bus with their friends and they feel happy when fellow passengers talk to them in a friendly manner or offer to hold their heavy bags for them.

Responding to the children, Nagasimha from Child Rights Trust said that this is a child rights issue and that apart from registering their complaints with BMTC, children should also call the child helpline 1098 if they face any issues while using the bus. Nagaraj and Shyamala, Asst. Traffic Manager, Public Complaints from BMTC shared the BMTC helpline numbers and email addresses and promised that BMTC will start a children sensitisation program for their staff from December 01, 2014. They said that a circular will be sent to all the staff asking that they should necessarily stop the bus for children and also be sensitive to their needs. They also promised to apprise the G M (Traffic) about the concerns raised by the children and other participants at the program.

Prahlad, Secretary, KSRTC and BMTC Employees union said that in depot meetings they do sensitise employees about the issues children face. Manohar, Human Rights Expert, said that children face many issues during their bus travel, in schools and in other spheres too. He said that we should understand these issues from the children’s perspective, the impact these have on children’s psyche and the subconscious lessons they are learning through these experiences.

There was active participation from the audience also in the discussions and many concerns and suggestions were brought to the fore through the lively debate that happened. The members of the Prayaanikara Vedike said that they will work with the children, the child rights activists and the BMTC to take up these issues and address them in a systemic manner.

The content has been forwarded by Bengaluru Bus Prayanikara Vedike (BBPV) and published with minimal editing, in the space meant for non-profit public interest messages on Citizen Matters.

How Bengaluru’s gated communities can positively impact the environment

In this article, the author shares his thoughts on initiatives that gated communities can take to reduce pollution and improve the environment.

Remember Bengaluru’s minimal traffic during lockdown? Here are nine pointers to sustain it

During COVID lockdown, we got a glimpse of a liveable Bengaluru where traffic and pollution levels were extremely low. This can be sustained post COVID too, if the city follows some core transport principles.