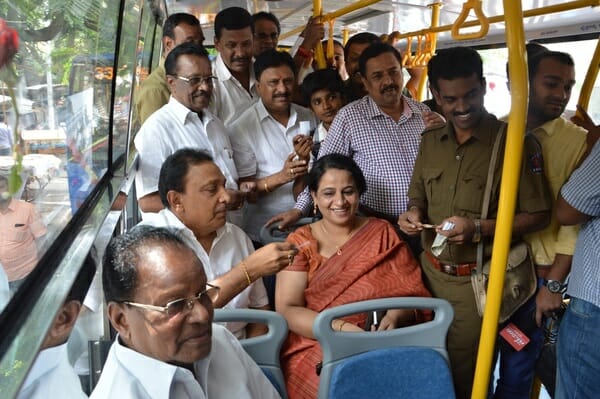 Providing efficient, reliable, safe and comfortable transport to the citizens of Bangalore city has been the sole motto of BMTC. In addition to this task, BMTC has initiated other important steps aimed at improved mobility and reduction in air pollution in the metropolis, through decongestion of traffic by marginalisation of personalised mode of transport, by observing Bus Day on the 4th of every month since February 2010.

BMTC has so far successfully completed four years of Bus Day and is on the verge of completing the fifth year. In these four years, Bus Day has contributed towards reducing air pollution, traffic congestion and diesel consumption in the city.

This month BMTC observed the 58th edition of Bus Day on Wednesday November 5th 2014. BMTC invited several special invitees such as Ramalinga Reddy – Minister of Transport & In-charge Minister, Bangalore City and Chairman KSRTC & BMTC, Krishnappa – MLA from Vijayanagar, Dhananjaya – Actor and Mamu Tea Angadi film team, to travel by bus in the Vijayanagar area, along with senior officers of BMTC including Dr. Ekroop Caur, IAS – Managing Director of BMTC, so as to encourage the public to do so as well. 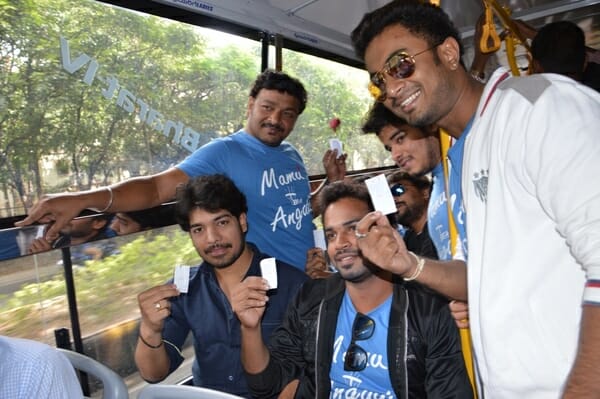 The Mamu Tea Angadi film team aboard a bus at Vijayanagar. Pic: BMTC

Over and above the normal operation of 6,338 schedules with 79,414 trips, arrangements have been made to operate all the schedules without any cancellation. In addition, the operation of more than 1,500 general shift schedules was extended beyond their normal schedule timing to 2200 hours, thereby adding additional trips to accommodate additional demand.

The content has been provided by BMTC, and has been published with minimal editing under the Message Forward section, a space meant for non-profit public interest messages by individuals and organisations.

On Sunday, January 10th, Rotarians and their families came out and worked hand in hand with Government officials in immunising the children all over the Rotary District.

Fire accident victims have not too many people to guide them on how to come out of the trauma. Here’s some help.

The air in these Bengaluru roads is often as bad as in Delhi or Beijing!