Bengaluru Metro Rail Corporation Ltd (BMRCL) has released its 2017-18 annual report online last week in its entirety. The report details BMRCL’s efforts to keep up the pace of construction and other issues.

Six new stretches of the Metro cover 72 km and 61 stations. Two extensions of the already existing purple line on the west and east sides, two extensions of the already operational green line on the north and south sides, and establishment of the new Yellow Line and Red Line form six stretches totally. While the civil contracts have been awarded for all the depots costing Rs 250 crores each excluding Baiyappanahalli, the cost of the mechanical work ranges from 50 to 55 crores. The report also explains the green initiatives planned by Metro, like lake maintenance and rainwater harvesting.

The report also lays out plans for Phase 3 of the Metro. Chief Minister of Karnataka had announced in February 2018 that this would make the Metro network a Ring Network.

DPR for #NammaMetro Phase 3 will be launched soon, taking the total length to 266 kms. Upon completion, Namma Metro will become a ring rail network in the city. #NavaKarnatakaBudget2018 #NavaKarnatakaNirmana pic.twitter.com/2nxzLcE5SP

The annual report explains that phase 3 of Namma Metro would be a circular line connecting important areas like Ring Road, South East areas of Bengaluru, Old Madras Road and Sarjapur Road. A radial corridor along Magadi Road and Old Madras road also has been envisaged for which consultants have submitted the feasibility reports.

The table below outlines Phase 2  and the status of each line. Info source: BMRCL annual report and media coverage.

So, how much headway has the BMRCL really made?

Out of 126.28 hectares of land that needs to be transferred to BMRCL, the majority will depots in Baiyapannahalli, Hebbagodi, Anjanapura, Kothanur and Challaghatta. This proves to be a challenge as 88.22 hectares are privately owned, while 38.06 hectares belong to the government.

Even while Bengaluru struggles without efficient public transport systems, the construction of Bangalore Metro Rail Project-Phase 2 continues to lag behind extended deadlines.

The annual report 2016-17 published by BMRCL says: “The company is confident of completing the Phase-2 of the project by 2020.”   The statement could be true for two of the six proposed stretches. In a meeting held at the Vidhana Soudha last month, Deputy CM G Parameshwara announced the revised deadlines.  He said that by 2020, Mysore Road-Kengeri and Nagasandra-BIEC  stretches will be ready.

It is, however, going to take another year for two other stretches: Baiyappanahalli-Whitefield and RV Road-Bommasandra will be ready the following year in 2021.  Gottigere-Nagawara stretch will take the longest to complete by 2023, while Yellachenahalli-Anjanapura will be complete by 2019. The annual report of 2017-18 reiterates his promises. More recently, the Chief Minister was of the same view.

Not meeting the deadline has become a pattern over the years even as the government has pushed the project forward from the start.  The first target was slated to be five years after the date of approval by the Government of India. Information available on the urban development department’s website says that an in-principal approval on 21/02/2012 was given for the government order number (UDD  179 PRJ 2011). Two years later, the official approval was given on 21/2/2014 in a letter addressed to the Chief Secretary of the Government of Karnataka.  This time, the letter clarified that the deadline was applicable from the date of starting construction.

The entire cost of the project in the detailed project report (DPR) prepared by Delhi Metro Rail Corporation roped in by GoK was Rs 26,405.14 crore in 2011, with an escalation cost of 5% per annum, including central and state taxes and duties. The Deputy CM admitted that the price has now reached Rs 32,000 crore in 2018.

The price of compensation has risen to 6,000 crores which is to be entirely funded by the government in the form of subordinate debt, of which Rs 3,077.15 crores have been already awarded. 1790 properties of the estimated 3011 properties had been acquired, said this media report. The cost for compensation and rehabilitation was Rs 2003.80 crores back in 2016, of which 1476.54 crores was said to have been given according to the annual report that year.

The updated annual report of this year shows the financial progress of phase 2 against the previous budget of Rs 26, 405 crores. In the funding pattern of Phase-2, 30 % is borne by the state government, 25% by the Centre and rest of the 45% is financed from external sources in the form of senior debt. So far, 4715.69 crores has been utilized towards the project as of 31 March 2018.

The annual report says that expenditure was Rs 264.1 crores as against the revenue earned of Rs 337.21 crores. BMRCL has managed to make a profit of 73.11 crores from that difference in 2017-18, after nearly six financial years. Since losses amounting to Rs 38.73 crores and Rs 93.67 crores were recorded in the last two financial years, the profit is likely to only go towards clearing debts.

The revenue generated from tickets in 2017-18 has increased to Rs 281 crores, due to rise in the number of daily trips from 206 to 298 trips made in one year and increased passenger intake. On good days, 4 lakh or more ridership is registered by the Green and Purple Lines combined.

The revenue generated from the non-fare stream, by providing space for events, advertisements, sponsorship and property development, has increased from Rs 20.18 crores to Rs 40 crores in one year, says this report. Below is the table attached from the annual report, showing the details of the income generated. 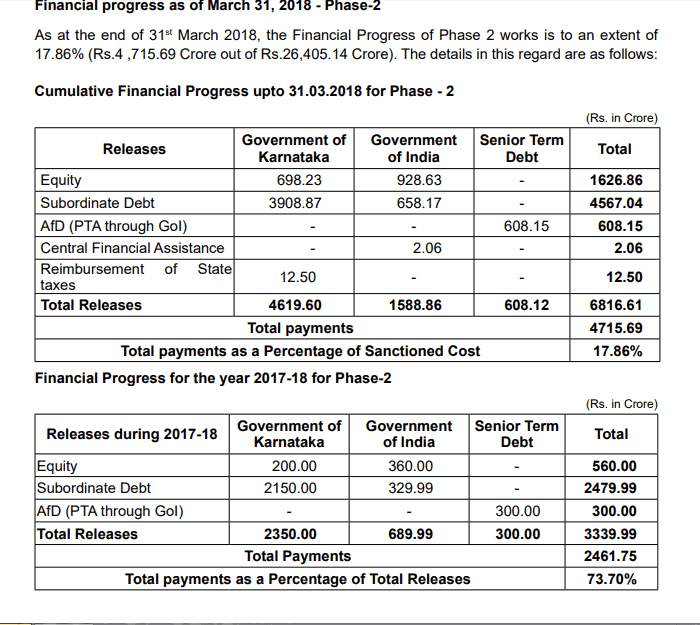 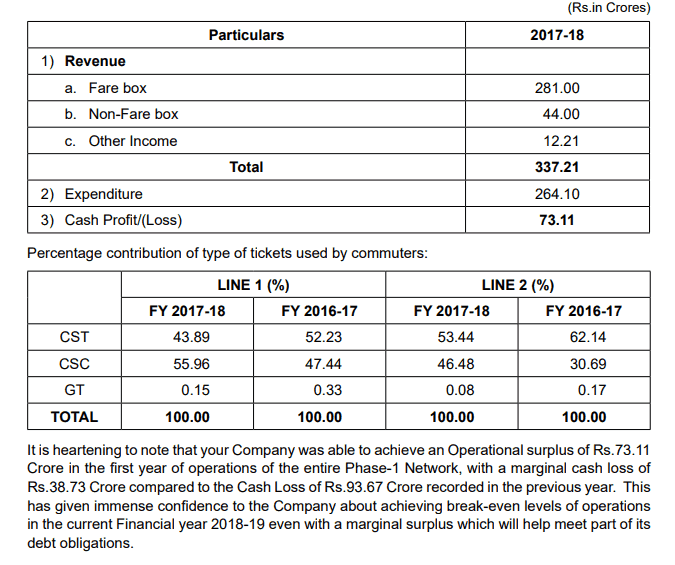 It’s a bumpy ride all along…

Backaches, pregnancy complications, respiratory disorders – these are only some of the problems that commuters face on Kasavanahalli Main Road. How much longer will the authorities ignore the mess?

A week before Women’s Day, women from different walks of life came together to make themselves heard against sexual violence. They sang, danced, told stories, stitched a quilt, posted notes and bonded with each other. The highlight of the event was that they eliminated jargon from their language of liberation.