Gurudas Sivadas, a resident of 8th block Koramangala in Bengaluru, received a call from an unknown number (84689 38330), one day. A woman told him that his late father, who had expired in 1997, had left behind a life insurance policy, with him as the nominee.

He was asked to claim the amount in the policy, Rs 145,580, on the same day from Life Insurance Corporation of India (LIC), failing which the money would be transferred to the government account, as the delay in making the claims was too long.

When Sivadas said he would seek advice from one of his relatives who worked in LIC, he was told that his relative would not be able to guide him, as the file number and details of his policy paper were a secret, known only to her and a few other senior LIC officers.

Asked why no letter regarding the policy nomination had been mailed to his address, he was told that the letter had been mailed, but was returned as the address entered by his father was incomplete.

The woman read out his and his father’s name accurately, but got the pin code wrong. The pin code of Koramangala is 560034, but she read it out as 560044. When he began enquiring about the details of the policy, the call was disconnected.

A few minutes later, the same woman called him back from a different number (90154 38149), and handed the phone over to a person she claimed was the LIC officer who was in charge of dealing with this policy.

“He wanted to talk only in Hindi,” Sivadas recalls. “He was so talkative that he hardly gave me a chance to ask him questions.” The person explained to Sivadas that the delay in processing the nomination had occurred because his father had left the details in the nomination incomplete. He assured Sivadas that he would transfer the amount to Sivadas’ savings account, if Sivadas sent him two passport size photos, and a photo-copy of his PAN card and address proof.

He was also asked to send along with these documents, a crossed cheque for Rs 14,999 in favour of Shree Investment solutions, because LIC, he was told, had to invest a part of the amount in this firm. Sivadas, convinced that he was dealing with a fraudster who was in possession of some of his important details, went to his bank and requested them in writing to stop operations of his account.

When Sivadas went to the police station to lodge a complaint, the inspector allegedly politely turned down his request on the grounds that the it would be futile. Hundreds of such incidents take place and it would be impossible to trace them, the police told him. “Anyway you haven’t lost your money. So why worry?’ was the justification given by the police for turning down his request.

The person called him once again while Sivadas was in the police station. When he handed over the phone to the inspector, the line was disconnected. That was the last call he received from them.

What to do when you are asked for your policy details over the phone?

The Executive Director of LIC has issued a mail, warning its policyholders that there have been complaints about receiving calls from persons claiming to be from LIC or Insurance Regulatory and Development Authority of India (IRDA), promising them undue amounts or bonuses. 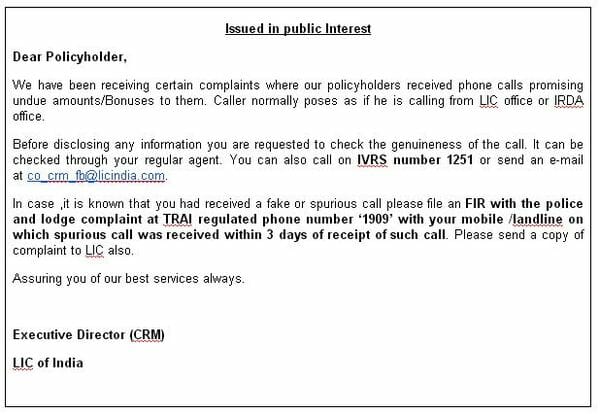 Before disclosing any information, verify that the caller is actually from LIC, by checking with your regular agent. Alternately, you can also call the IVRS number 1251 or mail co_crm_fb@licindia.com for verification.

If you happen to find out that the call you received was fraudulent, file an FIR with the police. LIC’s mail however does not mention what is to be done if the police refuses to file an FIR, as it happened in Sivadas’ case. Also ensure you leave a complaint on the TRAI regulated phone number, 1909, within three days of receiving the call.

Remember, when something sounds too good to be true, it usually is!

If you are one among the lakhs of voters of Chickpet, this is what you need to know! What has Chickpet MLA been up to in the last 5 years? Related Data: http://opencity.in/information/karnataka-election-candidate-profile-r-v-devraj List of

So Sunday is the election day for the graduate constituency MLC. Here’s a guide to voting booths and how to find your name in the electoral rolls.