Revathy Ashok, Managing Trustee, B.PAC and T.V. Mohandas Pai, Vice President, B.PAC made the submissions before the commission on February 19, during the public hearing conducted by KERC. 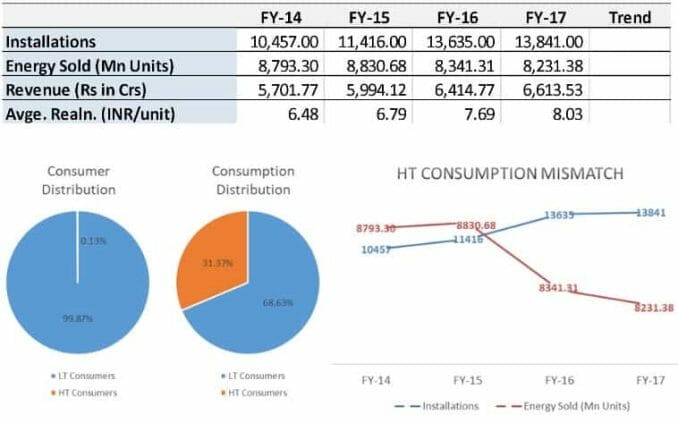 At a time where Bangalore Metropolitan Region and its adjoining districts are prospering, and Karnataka is growing at 8.5% CAGR (ECONOMIC SURVEY OF KARNATAKA 2017-18), many businesses are being set up (as can be seen from the increase in the number of installations). It is disheartening to see that these businesses are choosing not to procure power from the BESCOM (energy sold units are falling), this is solely driven by the unfair & uncompetitive increasing rates by BESCOM in HT category.

BESCOM has claimed in the submission that it is facing liquidity problem (PG 33).

The commission should disallow Rs. 664.05 Crs excessive consumption by IP set consumers and direct BESCOM to collect the difference amount from Govt. This clearly indicates in the name of farmers an excess of Rs. 6,668 Crs is being robbed. It is obvious that in the name of farmers there is large scale robbery of power and Government is turning a blind eye for various reasons.

Duplicate and multiple IP set per farmer should be removed to avoid subsidy to the rich. To bring in transparency, Direct Benefit Transfer (DBT) to be done to farmer’s bank/shadow accounts and full charges can be debit.

Current cost of subsidy is INR. 86,826/IP set. We propose Subsidy to be limited to INR. 40,000 per IP set for only farmers holding up to 2 Ha.  This would be in the lines of subsidy for dry land farmers similar to “Raita Belaku” scheme for the economic independence of dry land farmers from Karnataka State Budget 18-19

After making submissions T.V. Mohandas Pai, Vice President B.PAC said “We made the submission before the Hon’ble commission giving all the data and urged the regulator to protect the interest of citizens of Bengaluru in an unbiased manner and not the interest of BESCOM while determining the tariff for FY 19.”

Link to detailed presentation submitted to the commission.

Note: This is a press note shared by Sharath SR of BPAC, shared here as part of Message Forward, a space meant for nonprofit public interest messages.

Your chance to catch up on news that matters: Here’s a quick wrap of some important headlines from your city over the week gone by.