As the revised fines for traffic offences has come into effect, the Bangalore Traffic Police (BTP) has geared up for strict enforcement. If the BTP follows its current pattern of booking offences, what kind of offences would it fine the most, and how much would the department make?

This year, till August 31st, BTP booked over 14 lakh cases for driving without helmet, and another 10 lakh for riding pillion without helmet. Combined, these two categories made up over 41 percent of the cases booked in 2019. The trend was similar in 2018 and 2017 – together these two categories made up 36 percent and 37 percent of the total cases respectively in those years.

The graph above shows that despite the high number of cases booked, more drivers without helmets – but not pillion riders – have been booked this year compared to the previous two.

However, cases of ‘jumping traffic signal’ – the third most common offence booked – have increased between 2017 and 2019. This year, on average, over 95,000 riders were caught every month for jumping traffic signals. This is much higher than the number of signal-jumping offenders caught in previous years – over 53,000 per month in 2018, and over 59,000 in 2017.

Between ’17 and ’19, the number of cases booked for violating lane discipline and ‘No Entry’ signs have reduced. However, the number of people caught using their mobile phones while riding has almost remained the same – around 23,000 per month.

More cases against two-wheelers in 2019

Of the 59 lakh cases booked this year till August 31st, 67 percent were on two-wheelers, which is proportionate to the two-wheeler population in the city. According to the state Transport Department’s Annual Report for 2018-19, around 69 percent of the vehicles in Bengaluru are two-wheelers, 19 percent are cars and three percent are autorickshaws. 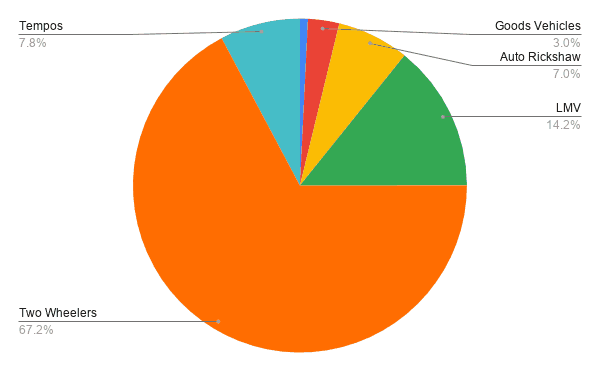 Anil Kumar P Grampurohit, Police Inspector (Traffic and Planning) at the Traffic Management Centre (TMC) in Ashok Nagar, says the data on booked cases may not give an accurate picture of the extent of various violations in the city. He says that cases booked for some offences are usually high, simply because those violations are easily visible.

But how do cases get booked? Apart from the usual checking, three DCPs conduct special drives in their respective zones to book violations that had been ignored that month, Grampurohit says. They also conduct special drives in certain areas, based on the most prominent complaint in that area. “We also receive complaints from apps like ‘I Change My City’, Publiceye app and the Public Eye Violation Post webpage of BTP. We verify these complaints, and book suspects under relevant sections of the Motor Vehicles Act,” says Grampurohit.

As per official data, 503 people were killed in road accidents this year till August 31st. The highest number of deaths occurred in KR Puram, Whitefield, Peenya, Hebbal, Yelahanka and Chikkajala.

From September 1st, the Motor Vehicles (Amendment) Act, 2019, came into effect. In the six days from September 4th to 9th, BTP collected around Rs 72 lakh from 6813 traffic violations, as per an official statement. Then too, the most number of cases were booked for helmet-less riding – over 67 percent. And 63 percent of the total fine amount came from these offenders alone.

The Act has increased the penalty for helmet-less riding from Rs 100 to Rs 1000. With this, the BTP could make Rs 30 cr per month just by booking drivers and pillion riders who don’t wear helmets.

On average, in 2019, the Bengaluru traffic police caught over three lakh riders (drivers and pillion riders combined) without helmets every month. So if the revised fine of Rs 1000 is levied from each of them, BTP could earn Rs 30 cr per month. However, the number of cases booked could be lower if the revised fines act as a deterrent, or if more offenders simply pay bribes to avoid the hefty fines!

“We think too much and feel too little” goes a line in Chaplin’s all time classic – a brilliant insight into the human psyche by a brilliant filmmaker. Read more about the film and upcoming screenings in the city.