After a long delay, the BMTC has finally launched the Intelligent Transport System (ITS) to help commuters. The ITS  is expected to help passengers track BMTC buses, and the BMTC monitor bus movement. Read: All you should know about BMTC’s ITS.

One can find ad hoardings everywhere – on buildings, storm water drains, skywalks and parks, even private residences. But no one knows the numbers, and no one knows how to stop them from coming up, or make money out of them. What’s going on behind the scenes?

Read: Advertising hoardings worth crores actually get no revenues to BBMP.

Pros and cons of travelling by Metro 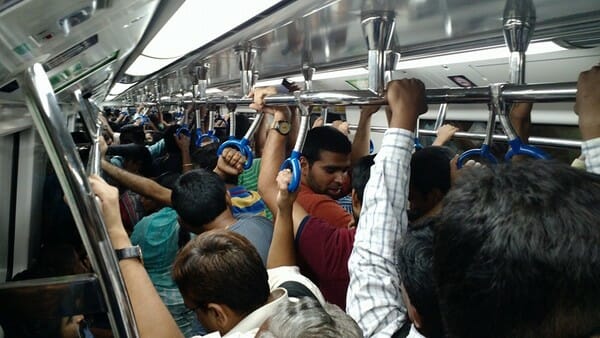 Metro trains are jam-packed in the evenings. Pic: Karanam Ramesh

It’s been three weeks since Metro East-West corridor has been functional. And it’s already a success story for public transport, with over a lakh footfalls a day. What can improve the system? Here’s what a commuter feels: The pleasure and the pitfalls of travelling by Metro.

Bangalore is hot, dry and dusty. We’re heating it up more, with all the gadgets and appliances we use. It’s local heating—not global warming. Here is the story of Bengaluru’s climate change…

If you rent out your apartment, read this!

Forced to hike your tenant’s rent to meet the extra non-occupancy charge that your building management committee makes you pay? The collection of the charge itself may not have any legal backing! Read: Non-occupancy charge for the flat you rent out could be illegal!

Gearing up for the rains

It’s that time of the year when the city will receive rains. Roads will flood while lakes will remain parched. Can we catch the rain and send it to lakes? Read: Let’s send some rainwater to our lakes.

Diverting water away from over-stressed storm drains and replenishing shallow aquifers can effectively raise water tables and reduce the intensity of flooding in a neighbourhood. Read: Why should I recharge groundwater?

Looking to raise funds to support a specific cause in your neighbourhood? You can do so by participating in the Nandi Hillathon and help restore Nandi Hills too!

600 kg of plastic seized in Whitefield

Residents from Nandini Layout worked with the BBMP to remove illegal hoardings and posters in the area. The KillBill campaign, as it’s being called, will be carried out monthly going forward. Read: KillBill campaign sweeps Nandini layout clean.

A master’s student is trying to understand the changing demographics of Bengaluru for her thesis. Share your insights by taking this survey.

All you need to know about Ward 55 – Devasandra

What are the works executed in Devasandra ward in the last five years? What are the outstanding bills? Who are the candidates contesting in the elections this time around?

The city council allocated crores of rupees last year for rainwater harvesting at parks, playgrounds and BBMP buildings. What happened?

Bellandur lake’s disappearing act, new anti-pollution measures being considered, and a revived Peripheral Ring Road project — catch all the important news from your city that you may have missed last week.