Bengaluru’s street vendors, under the banner of the Bruhat Bengaluru Beedhi Vyaapaari Sanghatanegala Okkuta (Federation of Street Vendor Unions of Bangalore), had organised a protest on March 10th 2016 at the BBMP Head Office. 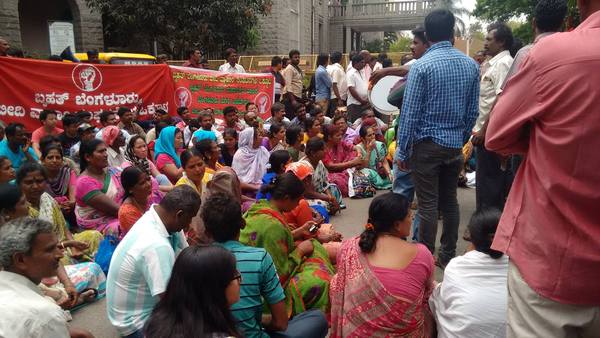 Soon after, the protest began, the BBMP Mayor, Manjunath Reddy, promised to meet with members of the Federation after the Council Sessions were done.

Demands of the protesters

1) A joint meeting should be convened with the Mayor, Commissioner and respective coporators, comprising Kaverinagar, Koramangala, Shivajinagar and Jayanagar 9th Block street vendors.

2) 1% funds should be allocated in the forthcoming BBMP budget, and free public amenities (like godown for street vendors’ stock, drinking water, toilet, solar lights, protection from rain/sun, crèche, garbage disposal system) should be provided in markets from the allocated funds.

3) Awareness should be created among all the street vendors and officials, about the Street Vendors (Protection of Livelihood and Regulation of Street Vending) Act, 2014. The government should take measures to organise awareness camps immediately. It should also issue orders to the BBMP officials and police officers not to violate the Street Vendors Act.

4) No street vendor should be evicted before conducting survey, as per Sec. 3(3) of the Street Vendors (Protection of Livelihood and Regulation of Street Vending) Act, 2014.

5) The officers should behave properly with the street vendors.

6) BBMP should spend more on its health centres and schools.

7) BBMP should allocate Rs 150 crores in its budget for BMTC, online with the Bruhan Mumbai Municipal Corporation’s Public Transport system.

8) It should help us in making plastic prohibition law successful.

9) One lakh saplings should be planted on Bengaluru city’s road sides, within the next one year, in order to provide shelter for street vendors, and in turn improve the green cover of the city.

10) In order to address grievances, a temporary ‘grievance redressal cell’ should be established under BBMP, as directed in the Street Vendors (Protection of Livelihood and Regulation of Street Vending) Act, 2014.

For a detailed list of demands, have a look at the pdfs (in Kannada and English) appended below.

About Lekha Adavi 4 Articles
The author has not yet added any personal or biographical info to her or his author profile.

Imagine cycling through the length and breadth of Karnataka? That’s exactly what this NGO wants to do. And while they are at it, they want to plant 60,000 saplings across the state.