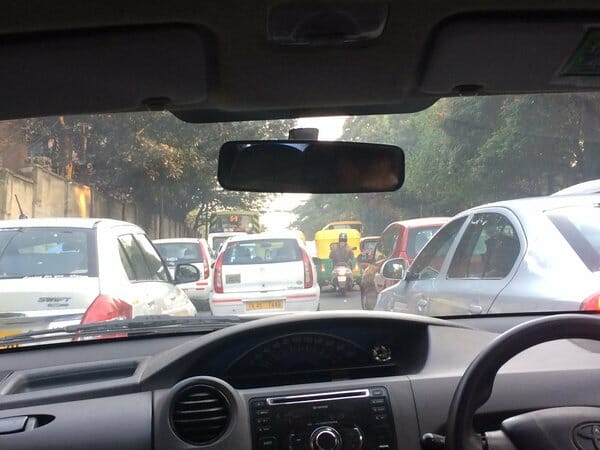 Civil Society activists in Bengaluru are opposing the Government’s decision, to build a Steel Flyover from Basaveshwara Circle to Hebbal Junction. As someone who supports the causes pursued by many of these activists, I’m surprised by the protests against the Steel Flyover project.

Is the Civil Society working against itself, jeopardising several of the causes we have been pursuing? Do we risk wasting the opportunities provided by this steel flyover project, to improve civic amenities in this part of Bengaluru?

To begin with, the claim that the Steel Flyover is a VIP Flyover to the airport, is inaccurate. BMRCL has released eight potential routes for the Airport Metro Line. We are all invited to choose one among these eight routes. Why would the government give the go ahead to the Airport Metro Line and another “Airport Flyover” on the same day?

Steel Flyover is not meant only for the airport traffic. It is to provide relief to the residents of Malleswaram, RT Nagar, Guttahalli, Sadashivnagar and Hebbal, who are suffering traffic jams every day on Ballari road. The traffic gridlock that exists between Chalukya circle and Hebbala junction will be considered unacceptable by any city.

Do we want to promote Public Transport or not?

Most of the Airport Cabs, Vayu Vajra buses, long distance buses to Hyderabad, Telangana and interior Karnataka, all take this road. This road is one of the Big 10 routes and is heavily serviced by BMTC. Private buses from Suburbs also run on this road. Manyata Tech park is one of the largest IT parks in Bengaluru. It has a first of a kind, dedicated public bus pickup service run by BMTC on Vajra buses. Many of those buses take this road.

A flyover on this Ballari road could make Public Transport faster and hence lot more attractive to people who would otherwise use private vehicles for their daily commute.

Do we want Pedestrian Crossings or not?

We all want adequate Pedestrian Crossings, so that we don’t have to risk our life and limbs to cross the major arterial roads. Anyone who has tried crossing Outer Ring Road, which is not elevated, knows what a nightmare it is. While skywalks and subways are coming up in few places, Urban Mobility experts insist that Pedestrians should ideally cross the road at grade level (ground). Isn’t an elevated road, more suitable to realise this dream?

Do we believe in the Big 10 bus system or not?

Big 10 bus services were developed by members of our civil society. They introduced the concept of high frequency services on the 10 major arterial roads of Bengaluru. Four of these lines run on roads which have elevated corridors – Ballari road, Hosur road, Mysuru Road, Tumakuru Road. Interestingly, all the other eight routes cross either Ballari or Hosur roads. It is because Ballari/Hosur roads are the erstwhile National Highway 7. Some civil society members have long-proposed an elevated road on this entire stretch. It is being discussed as the ‘five elevated corridors’ project. This has been declared in budgets too.

Do we want bus lanes or not?

Do we want a solution for three badly designed flyovers/underpass or not?

Most civil society activists agree that flyovers move congestion from one junction to the next. Union Transport Minister Nitin Gadkari, apparently said that the flyovers he helped build in Mumbai, didn’t ease traffic. The minister might have referred to the Western Express Highway which vertically divides Mumbai. It is not an elevated road, but instead a series of small flyovers. This model was designed to fail.

When long distance traffic and neighborhood traffic are made to share the same lanes, it affects traffic flow. Instead, we need to separate the neighborhood traffic from long distance traffic, by making the former run on the ground and the latter on elevated roads. This is why the badly designed flyovers at the CBI and BDA office junctions, along with the infamous Cauvery junction magic box, should be demolished and replaced with this elevated road.

Do we want wide footpaths and cycle lanes, or not?

Nandi Hills is a popular destination for Cycling enthusiasts in Bengaluru. Every weekend morning, we can see a stream of cyclists on the Airport Elevated Road. But can you imagine a bicycle lane from Cubbon Park to Hebbal junction? Or can you imagine wide footpaths on the current Ballari Road?

With the road narrowing to two lanes each way at many places, we’ll never win the argument to shrink the motor way to build wide footpaths or cycle lane on Ballari Road. The steel flyover, will move the traffic to the elevated road and make space for footpaths and cycle lanes. Do we want to let go of this opportunity?

Do we want people to appreciate Sankey Tank or not?

Some of us recently protested attempts to hand over land near Sankey Tank, to a private residential project. But can you imagine reaching Sankey Tank during weekday evenings? C V Raman Road (near Sadashivnagar Police Station) and Sankey Road (at Bashyam Circle) are jammed most times of the day. In the evenings, no vehicle can cross these junctions without a 10-minute struggle.

Why is this beautiful area of Bengaluru, a traffic nightmare? It’s because, traffic from National Highway 4 (Tumakuru road) and from heavily populated Malleswaram, Rajaji Nagar, Yeshwantpur and Mathikere, reach the heart of the city using C V Raman Road and Sankey Road. If the steel flyover is built, more right turns can be enabled from Malleswaram onto Ballari Road, providing much needed relief to this area.

We can make this elevated road a success:

Many of the other concerns that we have about the steel flyover project, are largely exaggerations, or can be easily addressed by talking to the government.

A. Trees cut can be compensated.

When the metro underground section was built, many trees in front of Vidhana Soudha were cut. But new trees are being planted now with the expertise of the Horticulture department. BDA has proposed to plant 60,000 trees to compensate the 812 trees estimated to be cut. Why can’t we ensure that 812 of them are planted, in the vicinity of this flyover. Like Veterinary College campus?

B. Aesthetics and Heritage buildings can be preserved, even improved.

When the Promenade on MG Road had to be removed for Metro construction, there were lots of protests. But anyone who visits the new Promenade and the Rangoli Metro center, has no reason to feel bad. Similarly, anyone who has taken the Bengaluru Heritage Walk on MG Road, knows that the Metro line, did no harm to the British era buildings there.

C. Even parks can be built under flyovers.

Civil society in Mumbai came together to build the Nanalal D Mehta garden under the Tulpule Flyover in Matunga. This 600-meter stretch even has a skating place for children. On Sundays, kids’ zones are organised under the flyover. Many of us in Bengaluru have volunteered to beautify pillars under flyovers. Emulating Mumbai to build one or two parks under this steel flyover, is easily achievable.

Government could have communicated better.

Ofcourse, the government has failed to make the case for this Steel Flyover. Its communication has been so poor, that people seem to think the project is being rushed. The reality is, the project was initiated in 2010, tenders floated in 2014-15 and final decision was postponed from June 2016 to September, after Civil Society wanted more consultations. BDA is rightly being criticised for refusing some information via RTI, which already existed on the internet!

Now the discussion has largely shifted away from the merits of the Steel Flyover to other issues like BMPC and BDA vs BMRDA. These discussions are valid and need to be had, but they provide no relief to the people of North Bengaluru, who are suffering the traffic gridlock on Ballari road everyday.

What kind of city do we want to live in?

Finally, what kind of city do we want to live in? A city where a high speed road runs vertically through, and children risk their life to cross it? Or one where fast moving vehicles run on an elevated road, and the ground below is available for civic facilities like pedestrian crossings, wide footpaths, cycle and bus lanes, and road side parks?

Do we want our children to inhale the toxic exhausts from vehicles on jammed roads? Or should vehicles move quickly on elevated roads, leaving our neighborhoods with less air pollution?

An elevated road corridor from Devanahalli to Electronic city will make our neighborhoods safer. This 6.7km steel flyover from Basaveshwara Circle to Hebbal junction, only adds to the 27 Kilometers of the elevated corridor that already exists.

Instead of opposing the Steel Flyover project, we should grab the opportunities provided by this project, to make a Better Bengaluru.

The opinions expressed here are author’s own. Citizen Matters as a news analysis website, makes an attempt to present all sides of the issue, but does not endorse or reject them.

Open letter to BBPAG members on steel flyover
Steel flyover debate: Let a plan drive the city transport
What Bengaluru can do with 1800 crores
BDA keeps steel flyover on hold after drawing flak from citizens
BDA botches up the steel flyover issue by hiding information

About Balaji Chitra Ganesan 2 Articles
The author has not yet added any personal or biographical info to her or his author profile.

How Bengalureans use Whatsapp to connect and solve civic problems

You thought WhatsApp is all about fun, family groups and fake news? Wrong. Bengaluru is proving that WhatsApp can be used to connect, collaborate and participate in governance.

Celebrate Joy of giving by giving up

7.3 Bangaloreans in every one lakh suffer from lung cancer. Most of it is caused due to smoking.