Melissa Arulappan recently counted 13 bikers driving on the wrong side on a one-way street, all within two seconds. This is not a one-off incident. Citizens across Bengaluru have been noticing an increasing number of such violations in the recent past. What’s going on?

In 2019, just till July, the Bengaluru Traffic Police booked over 1.3 lakh cases for not following lane discipline, 2.4 lakh cases for violating ‘no entry’, and 36,579 for reckless driving. In the same period, there were 2713 road accidents in the city that killed 445 people in all.

Given over 13,600 kilometres of main roads in the city, and total traffic police strength of just 5000, it looks like there could be more violations than bookings. 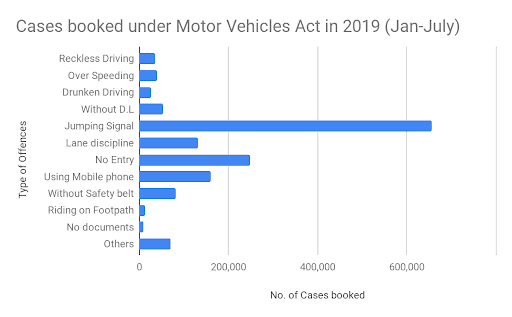 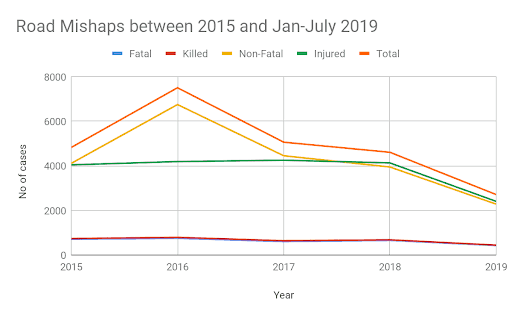 It is evident from the chart above that number of fatal accidents has not reduced in the last five years. Neither the shocking data nor the efforts by the authorities to control such fatal incidents have made any difference, as people continue to break rules.

Melissa Arulappan, a public relations professional and resident of Richards Town, was appalled by what she noticed near the Mosque Road Bridge in Frazer Town recently. She saw 13 bikers driving on the wrong side on a one-way street, all within two seconds. Worse, the bikers were riding without helmets, and some had children in the pillion.

Melissa’s complaint to the local traffic police did not help. They pleaded helplessness, saying even if they booked the violators, no action would be taken against them at the police station because of pressure from political lobbies.

“So, the traffic cops stand on the side from where the bikers are not supposed to enter, and deter them from entering the wrong side of the road. They are there for a few hours, after which it is back to square one,” she says.

One city, one story

At the other end of the city, 38-year-old Abhay Porwal, a patent attorney and resident of Whitefield, has been fighting a battle against those who break lane rules, for a long time.

He has been posting videos and pictures on Twitter and other social media platforms, highlighting the issue of wrong-side driving for the past year-and-half. He says that IT professionals working in the neighbourhood are regular offenders and that they put school buses in danger.

Abhay recounts an incident wherein he stopped a man who was riding in the wrong direction on Brookfields Road. Abhay says, “He asked me to come out of my car, and when I did, he and his pillion rider started beating me. They asked me to go check the CCTV camera and figure out who was wrong.”

Abhay says the police are more focused on traffic management than enforcing rules. “If there are hundreds of people coming in the wrong direction, the traffic police will ask them to wait and give them way when the traffic opens up. How do we find a solution to this?” he asks.

What the cops say

When asked about the increasing cases of drivers breaking lane discipline in the city, specifically near the 16th Main traffic signal (next to Advaita petrol station), popularly known as the Udupi garden signal, Mico Layout Traffic Police Inspector Puttamaddiah says such cases have increased over the past few months. “The Jayadeva flyover is being demolished in phases. Due to this, there are a few who take the easy way out by riding on the wrong side during peak hours.”

Puttamaddiah says the traffic police have been taking measures to reduce this, but the department is already short of staff, and most days, almost half the police personnel will be on duty at Vidhan Soudha. “With the limited resources we have, we are doing the best we can,” he says.

Anil Kumar P Grampurohit, Police Inspector (Traffic and Planning) at the Traffic Management Centre (TMC) in Ashok Nagar, agrees that wrong side driving has increased in the city despite efforts by the authorities to contain them. TMC is the hub of the city’s transport management system, where real-time data is used to control traffic.

“We are taking measures like surprise-checking and deploying officers at junctions from where we have got complaints. But we lack the manpower to deploy police personnel at such junctions throughout the day. We are looking into the issue,” he says.

Root cause and solutions

But why do people break the rules in the first place? Is there a solution to this menace? Will imposing hefty fines solve the problem?

Anusha Jaishankar, who runs a road safety behaviour change initiative called Positive Strokes, says the problem lies in the way the roads are planned and the city has developed. “Our roads are clogged. Sometimes we are unable to take the ideal turn, and have to go a few kilometers further through dense traffic to get to the place we want to go to. In a situation like this, people will prefer going in the wrong direction for a few meters.”

She says that rules should be made easy to follow. “The roads should have more options for turning, and people should be allowed to turn when there is a clogged corridor.” She advocates a multi-pronged approach based on design, planning, education and then enforcement. “Doing street audits and making use of traffic furniture to ensure smooth flow is where we should begin… Increasing awareness within small communities and asking citizens to help out with traffic management can also bring change,” Anusha says.

But for S Satyapal of the National Road Safety Organisation, an NGO that helps build road safety awareness, people break rules because there is no fear of law. “The enforcement of law should be very strict, and penalties must be high not only in the main roads but also in the inner roads. Enforcement cameras and other technology should be made use of, and people should fear the law whenever they come out of their gates.”

Anusha feels otherwise, “I am absolutely not in favour of having new laws that we cannot impose and enforce, and then letting people break these as there is no one to check violations. Hefty fine will hurt people, yes, but you need enforcement for it.”

Without fixing the fundamental issues of road design, people’s behaviour and enforcement bandwidth, things are unlikely to improve anytime soon.

Opportunities for workers open up, but more hurdles ahead

Bangaloreans reading this article may have felt the pain of the downturn, but access to job opportunities and benefits like insurance are things we still take for granted. But what about our cooks, maids, plumbers, construction workers and others? Here’s what we found out.

Been busy or away from your city? Catch up on some of the most critical developments in Bengaluru over the last one week.

Having mostly popped up over the last decade, Bangalore new age libraries are tuned in at Internet speed to city’s vast reading bunch and their ever-expanding preferences. A Citizen Matters special.