The spectre of water scarcity is haunting Bengaluru. And from a din of solutions to avert this man-made crisis, one suggestion has take the city over like a storm, and brought to the forefront a debate with myriad perspectives.

However, Parameswara’s suggestion resonated with many citizens who have been facing the brunt of water shortage. Questions remain – at what pace is apartments coming up in the city currently, and would restricting new constructions improve the water situation?

Apartment sales and launches on the rise

Bengaluru’s real estate market is slowly picking up pace after the sudden policy changes (read demonetisation) that had affected industries. According to a report released this May by Liases Foras, a research and rating company, the city’s residential real estate sales had increased by 14 percent in FY 2018-19 compared to the previous year. 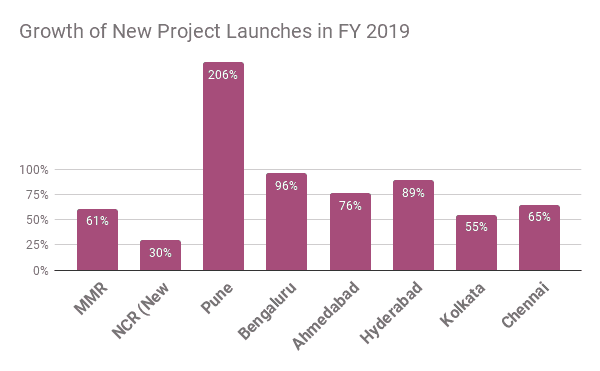 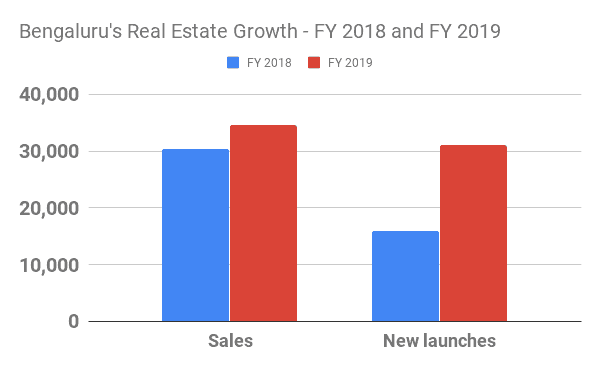 In the top eight cities overall, during Q4 of 2018-19, the maximum number of sales were in Rs 25-50 lakh bracket. This segment accounted for more than one-third of the total units sold. But in Bengaluru, sales were highest in the Rs 50 lakh-1 crore bracket that quarter, indicating the city’s preference for higher-end properties, different from the national trend. Similar was the case with new launches too.

As the city’s real estate market is flourishing again, would a blanket ban on construction hamper this? How would it affect the thousands who work in this industry?

Farook Mahmood, Chairman and Managing Director of Silverline Realty, said a ban would shatter Bengaluru’s economy for the next five years. “Real estate is the second largest provider of jobs in the country. Since Bengaluru is one of the more vibrant markets, a ban would hamper its economic growth by denting not only the real estate market but also the ancillary industries connected to it. There are 45 different industries connected to real estate.”

However, urban and regional planner Dr Anjali Karol Mohan, who was involved with developing the city’s draft Revised Master Plan (RMP 2031), says this is not a black-and-white issue.

“Construction profits the few, but costs are borne by the larger city”

Anjali said that most new constructions are coming up in the periphery of the city since land prices are low there. She said, “Most of these apartments are being consumed for speculation. Construction is preceding development there, and many builders are extracting groundwater. If this is stopped, at least there would be some relief to the water table.”

Anjali said these houses are not being built for those who need it. “Some say that a construction ban would escalate the prices of the houses and they would become unaffordable. But unaffordable for whom? We are not really producing houses for the category that requires houses, or where the shortage is – that is, the affordable housing segment (below Rs 8-10 lakh).”

She said the fundamental question is, who should bear the cost of construction? “Is there an ecological, social and cultural cost to construction? Are the people who profit from these apartments and speculation bearing that cost? If yes, I think it is fair enough to go ahead with the construction. But that’s not the case – the costs are being borne by the larger city.”

However, Mahmood said the government should find alternate methods to get water to the city rather than restrict construction. “We understand that the water levels are low, but alternative solutions like making rainwater harvesting mandatory for all buildings, plugging the loopholes in water distribution etc would help, instead of a blanket ban on construction,” he said.

But, with the threat of an acute water crisis looming, some Bengaluru residents welcome the government suggestion. Retired IAS officer V Balasubramanian said the suggested ban was a right step, but a bit too late. “There are already around 27,000 multi-storied buildings in Bengaluru and they are all dependent on underground and tanker water. Almost 60 percent of the total consumption of water in the city is from these sources. There are around four lakh bore wells in Bengaluru and most of them are going dry. There will be water rationing in the next five years,” he said.

Balasubramanian believes a ban would not be passed by the cabinet though. “Most ministers are themselves real estate giants and would be against the idea. Parameshwara must have floated this idea to make people feel the seriousness of the situation. Awareness has come into the public sphere and it is a good development.”

Balasubramanian said, if there was a ban on the construction of new apartments, there would be no buyers for upcoming buildings for a short period, the real estate market would go down, and the prices of existing buildings would go up; but not for long, as none of the new buildings would get water in the near future.

Anjali opines that eventually, a decision such as this should be based on a studied response. Currently there is no analysis on the housing requirement of the city. “We need to unpack what kind of houses are being produced, how many of these are really required, what the holding capacity of the city is in terms of water etc. If the minister said there would be a ban, I think it is a good option given how apartments are coming up now. If he said that certain kind of apartments would be banned and certain would not be, then it would be an informed decision,” she said.

What happens when BBMP speeds up the Khata process for a citizen who was campaigning for fair and transparent process in issuing Khata? He refuses to take it, because the process isn’t transparent yet.

Rajvir vs Bangalore Club: Is there a lesson from such incidents?

By now, Bangaloreans are familiar with top police officer Rajvir Sharma’s run-in with the private and elite Bangalore Club over a month ago. Can such incidents be avoided in our culture? Some insight.

Thousands of preschools and daycares may have closed during the pandemic, but Karnataka has no policy or guideline, let alone help for the sector.