Pedestrians, as we know, are the most vulnerable road users. Over the past three years, Bengaluru has consistently seen the third highest number of pedestrian deaths among major Indian cities. Between 2010 and 2018, more than 3000 pedestrians have been killed in traffic crashes in the city, and four times as many have been injured.

Many of these deaths could have been prevented had corrective measures been taken in a conscious and timely manner.

But, beyond just the size of the problem, what do we know about pedestrian crashes happening in our city? Why and when do these crashes occur, and whom do they most impact?

In an attempt to answer some of these questions, we at The Footpath Initiative studied around 550 FIR reports of pedestrian deaths from two years – 2017 and 2018 – in Bengaluru. Some consistent patterns have emerged from our study, which are discussed here.

Our analysis also indicates that the victims in these cases are often the residents in adjoining areas. Arterial roads, typically as wide as 50 meters, are primarily designed and built to support unobstructed vehicular movement. What is often discounted is residents’ need to access these roads on foot everyday.

2. About a third of victims are aged 60 and above

Data from both years indicates that nearly a third of the pedestrian crash victims are at least 60 years old. Contrast this with data for the year 2018 recently published by the Ministry of Road Transport and Highways (MoRTH). As per MoRTH data, the majority of road crash victims overall (not just pedestrians) in India are young people under 35 years, and only about six percent of the victims are aged 60 and above.

That is, senior citizens comprise only a small percentage of road crash victims overall, but make up a large percentage of pedestrian victims. This fundamentally means that elderly pedestrians are a subset of victims who are highly vulnerable and suffer a disproportionate amount of risk in our cities. One of the primary reasons is that our roads are not designed for people who are comparatively less agile. 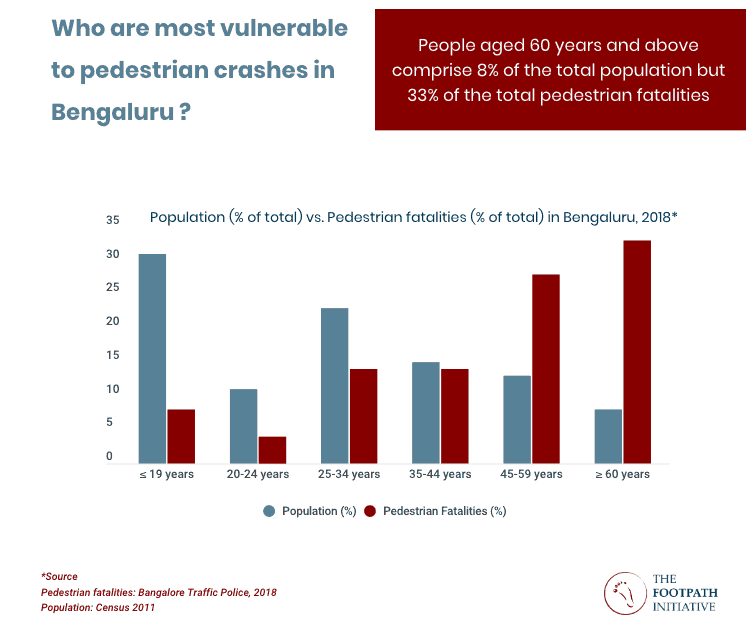 3. Speed is a significant risk factor

Most crashes happen on road stretches that allow for high speeds. Arterial roads which lack effective traffic-calming measures or enforcement of speeds, record a high number of pedestrian deaths.

Crashes were also rampant at the entry and exit ramps of flyovers. This means pedestrians face significant risks even on small stretches that allow for speeding, on an otherwise congested/traffic-controlled road.

4. Nearly 60 percent of victims were crossing roads while the crash happened

Most discussions on improving pedestrian infrastructure are centred around footpaths, but a more prominent cause of pedestrian crashes seems to be the lack of safe and frequent crossings.

Many pedestrians met with a crash while crossing the road as opposed to walking or doing other activities on the roadside. Crashes usually occurred at intersections and mid-blocks (the area between two consecutive intersections), with equal prevalence at both.

Consistently, the highest number of crashes in both the years happened between 7 pm and 8 pm. It would be helpful to analyse pedestrian movement during these hours and also ascertain dominant reasons for crashes during these hours.

Many attempts to reduce pedestrian deaths and injuries in Bengaluru and other cities have been disappointingly ad hoc and reactive, without understanding core issues. The large-scale patterns discussed in this article can help prioritise our actions and plan our resources to urgently address the issue of pedestrian safety.

The next article in this series will discuss specific solutions towards this end.

About Anusha Chitturi 3 Articles
Anusha Chitturi is co-founder of The Footpath Initiative, a project to improve pedestrian safety in Indian cities. The project aims to understand specific risks that impact pedestrians, and to initiate data-driven advocacy in cities, starting with Bengaluru and Chennai.

Scheming of an underpass at Tagore Circle

Near the Basavanagudi police station, there are two major bus stops used by about 7000 persons daily. With the underpass, these stops will vanish, putting the public to enormous discomfort.

Learning outcomes in government schools and affordable private schools remain lower, due to the quality of teachers and other related issues. Can an app help teachers better their own skills of teaching? Meghshala is trying to crack the right formula for this.