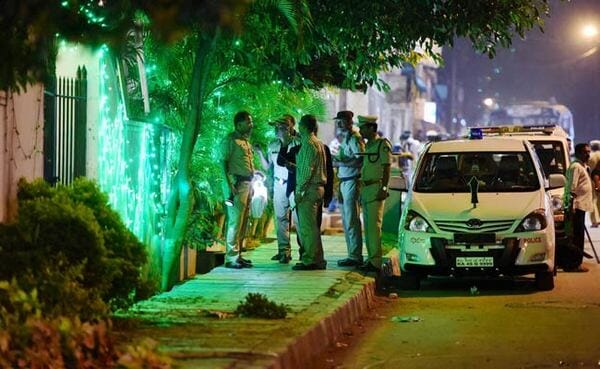 Just before new year 2015 celebrations begin, Bengaluru saw a real low intensity blast on Sunday night. Three people were injured in the explosion that took place around 8.30 pm, in front of Coconut Grove Restaurant on Church Street, near MG Road. A woman later succumbed to injuries in hospital.

Bhavani, a 38-year-old woman from Chennai who was in Bengaluru with her kids for the Christmas vacation, died at Mallya Hospital. She suffered head injury and severe blood loss.

Kartik, who is a relative of Bhavani and a student living in Bengaluru, and Sandeep, a software engineer living in Rajarajeshwari Nagar, were the other two injured. Both are recuperating in Mallya and Hosmat hospitals respectively.

Chief Minister Siddaramaiah, however, refused to give any name to it, saying that “It is premature to say who did it, let the police complete the investigations.” In a press conference on December 29th, he said that public needs to be alert and inform cops. He said that the investigation would be carried out by the state police themselves, while the IB and other investigating agencies will be taken into confidence.

M N Reddi who briefed the media once again along with Director General of Police Pachao said Karnataka State Reserve Police (KSRP) battalions have been deputed across the city. He added that people will be asked to cut down new year celebrations, if required. The police are reportedly reconsidering the permission given to bar and restaurants to serve liquor till 2 am on New Year’s eve, after the high level meeting.

After a high level meeting in Bengaluru on December 29th, the Chief Minister decided to handle the investigation through the state police. Additional Commissioner (Law and Order) Alok Kumar is investigating the case. High alert has been declared for the city. Security has been beefed up in important areas such as City Railway Station, Majestic Bus Station and City Market.

Soon after the blast, Bengaluru Police Commissioner M N Reddi appealed people to keep calm. “Please do not panic, do not believe rumours. Call 100 in case of any doubt. Bangalore City Police has secured the area and investigation is on,” he said on Twitter.

Later he appealed people specifically not to believe in the bomb and terror threats circulated on Whatsapp, which he termed were rumours. However, he said, the city police is monitoring all such threats and ensuring safety for all.

He added: “There is no other blast that has happened in the city. We request people to keep a watch and remain alert in public places.”

Home Minister Rajnath Singh said in a tweet that the Central government is ready to provide all help. He said he spoke to Karnataka Chief Minister Siddaramaiah regarding the blast. Later CM Siddaramaiah too tweeted about the same. National Investigative Agency is expected to be involved in the investigation, if the situation warrants it.

TV reports said that two people, a security guard of the Coconut Grove Restaurant and a pan shop vendor, have been detained for questioning, to collect more information about suspects.

The blast is perceived to be a low intensity blast. The device was kept wrapped in cloth and paper, in between flower pots in the place. Sharpnel strewn in the blast site contained iron screws.

M N Reddi, Bengaluru Police Commissioner who spoke to media immediately after the blast, said that Improvised Explosive Devices (IED) were used. Television reports said that ammonium nitrate was used in the device.

Even as the news started spreading, social media became a battleground for news and rumours. Twitter and Facebook channels were used extensively by Chief Minister of Karnataka, Bangalore Police Commissioner and Crime Control Bureau as a communication tool to convey right messages to public.

However, private social networks such as Whatsapp had rumours circulating, such as blast threats in specific places. One such message asks people not to travel outside; Shantinagar, Malleshwaram, Rajajinagar, Jayanagar, Chinnaswamy Stadium, Koramangala and other areas were deemed as possible targets.

However police assured that all precautionary measures will be taken and public need not panic. Police have increased security measures and patrolling all over the city.

What you can do

While the actual amount required to construct the Peripheral Ring Road is around 650 crores, the Bangalore Development Authority is planning a mega project of 4500 crores, where land and money get wasted.

The work that took off two weeks ago has not been moving forward. The reason: potholes are not small enough to fit the ward level budget.