I was pretty excited and went with a lot of hope to attend a ‘Namma Karnataka’ development conclave at Vidhana Soudha on February 17, jointly organised by a media house and Government of Karnataka. The event, however, turned out to be a major marketing and propaganda exercise of government’s infamous Elevated Road Corridor Project. Large flex banners highlighting the project had been put up at the venue, and the panel discussion on Bengaluru’s transport issues hardly had any discussion, and there was no question and answer session.

Since I and many other invitees did not get an opportunity to voice our opinions and technical viewpoints, I decided to write this article to provide some technical perspective on such massive road infrastructure projects being proposed by the state government to solve traffic congestion problems and related externalities.

First of all, the basic premise of the state government on effective utilisation of road space, and its justification for pushing such road projects, is fundamentally flawed. Their focus is on vehicle capacity (in terms of Passenger Car Units (PCU) per hour) rather than person capacity (in terms of passengers per hour, per direction). 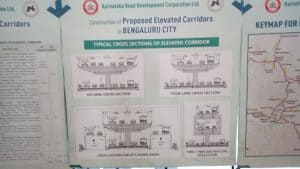 Where is the space to add more buses in Bengaluru. Yet, we add almost 3,000 new personal vehicle registrations every day?

Time and again the question raised is, where is the space to add more buses in Bengaluru. Yet, we add almost 3,000 new personal vehicle registrations every day for which we apparently have space. In fact, a bus needs the same lane width to move as a car, and has a much higher person capacity (8.3 times where there is a bus priority lane). While a metro rail system provides 38 times more carrying capacity with the same Right-of-Way (ROW) width provided for normal traffic.

Using a macro-simulation travel demand model that IISc’s Transportation Engineering Research Lab developed for the whole Bengaluru Metropolitan Region (BMR), we did an estimation of how much space cars and buses currently occupy on BMR’s road network at any moment during typical peak hour travel. As per our model, the total area occupied by cars, which carry only about 5 per cent trip mode share, during peak hours is 2137 times the area occupied by buses, which carry 45 per cent trip mode share. (Trip Mode share means the percentage of trips by cars (or buses) to the total number of trips. Src)

To carry one person, a car occupies 12.8 times more space than a bus.

Public transport in Bengaluru should have 70% modal share compared to 50-55% currently!

For an Indian city of one crore population like Bengaluru, the ideal modal shares for a sustainable transport system should be 70 per cent for all public transport modes (currently about 50-55 per cent) and at least 15-20 per cent for bicycling and walking. Costly road-based projects will only result in the opposite of this ideal mode share that the city should have.

My research lab also simulated the impact of the proposed elevated road corridor on normal traffic in the whole BMR network and on the likely changes in exhaust emissions and fossil fuel consumption, comparing it with a simulated of metro rail system scenario running on the same elevated corridor (besides the phase-1 and committed phase-2 of Namma Metro).

Simulation shows fuel consumption will decrease by 5-7 % if we have metro in this corridor instead of elevated roads.

Results from the simulation estimated that compared to the present Business as Usual (BAU) scenario, total fossil fuel consumption in BMR will increase by 3-4 per cent in the elevated road corridor scenario whereas it will decrease by 5-7 per cent in the metro rail scenario. Similarly, the elevated rail corridor will increase exhaust emissions of pollutants like CO, HC, NOx, CO2 and PM by 3-4 per cent while a metro on the same corridor will reduce exhaust emissions by 5-6 per cent.

Also, while the elevated road corridor will reduce total system travel time by 8 per cent, the metro scenario will reduce travel time by 40 per cent. Moreover, at critical locations along the corridor like K R Puram junction, the volume to capacity ratio (V/C) on the elevated road corridor would exceed 2.0 (being large and long conduits it will suck traffic from across the network) and just a little less than 1.0 below it at ground level, while a metro rail would have a V/C ratio substantially below 1.0 even on the ground level road.

The government should stop trying to satisfy users of all the modes all the time, and aim to achieve a right balance of trip mode share to improve the overall quality of life of Bengaluru.

About Ashish Verma 6 Articles
Prof. (Dr.) Ashish Verma is the Convenor of “IISc Sustainable Transportation Lab. (IST Lab.)”. He has a Ph.D from IIT Bombay, and is currently serving as Professor of Transportation Systems Engineering at the Department of Civil Engineering, Indian Institute of Science (IISc), Bengaluru. He has authored more than 200 research publications in the area of sustainable transportation.

Don’t throw away, sell them

A second hand ‘santhe’ in a modern context, that is what the flea market was all about. Anupama Gummaraju, co-founder of Second to None, a flea market initiative, shares her experience.

This is not my story , this is story of a young visually impaired girl – her story of grit and determination. It was the slowest marathon of my life. But it was a special one, in all senses.

Leading public figures add their voices of support to ‘Saaku’

As 11 December approaches, leading public figures in the city and elsewhere in the country added their voices of support to Saaku (‘enough’), the rally against corruption, and encouraged citizens to join them in the events this week.