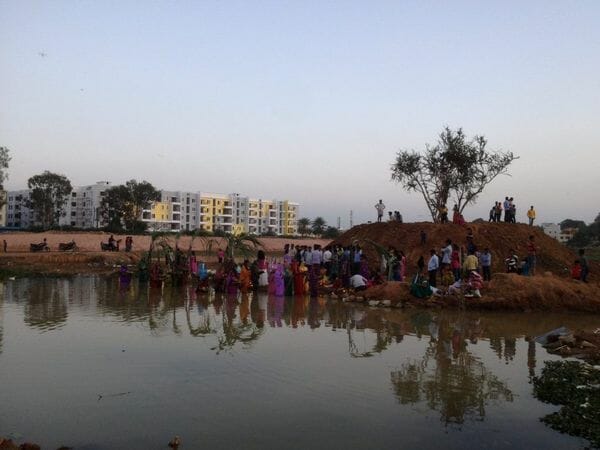 On June 29th 2015, a performance audit on Conservation and Ecological Restoration of Lakes under the jurisdiction of Lake Development Authority (LDA) and Urban Local Bodies (ULBs) in Karnataka by the CAG of India was tabled in the Assembly. The report brought into focus many of the ignored facts about lakes in the city and the state.

This 75-page-long performance audit covering the period 2009 to 2014 highlights the deterioration in ecological health of lakes as well as issues among the institutions of management and governance of lakes.

The performance review commenced in May 2014 and ended by February 2015. Then the performance audit report was tabled in the Assembly and entered the public domain.

Out of the 56 lakes checked, the CAG auditors found the involvement of NGOs/ voluntary organisations in case of only two lakes. No checked lakes had a working Lake Management Committee. There existed adequate information in public domain only for 29 out of 56 lakes checked.

Urban Development Department of state government tried to argue in its reply in March 2015 that “the monitoring committees have been formed in two lakes (i.e. Kaikondrahalli and Chinnappanahalli)”. However, the CAG audit observes that these agencies “were carrying out only maintenance works and were not involved in lake restoration works.”

Audit scrutiny of records pertaining to ‘Adopt a Lake’ scheme that was launched in July 2004 showed that LDA had failed to redress problems faced by the adopting agencies such as continuance of dumping of construction debris, burial of dead bodies in lake area, trespassers etc.

Six lakes that were taken up under the scheme (Bhairasandra Kelaginakere, Challakere, Kenchanahalli (Bachikere), Kundalahalli, Mahadevapura and Sheelavanthana Kere) were taken back from adopting agencies. In its reply, the LDA argues that such an action was taken “as adopting agencies had breached the terms and conditions in developing and maintaining lakes.”

In its reply dated March 2015, on the same matter, state Urban Development Department accepted the audit finding that the scheme could not be implemented as planned.

As per a notification issued in March 2008 and a corrigendum dated October 2008, the state government issued instructions to create buffer zones to an extent of not less than 30 metres along the periphery of lakes. Possible breach of buffer zones was noticed in as many as 34 lakes. Not a single lake out of 56 lakes showed a clearly demarcated buffer zone.

During a joint physical verification, CAG auditors found that stipulated buffer zone was not maintained in six lakes (Chinnappanahalli, Kaikondrahalli, B. Channasandra, Horamavu-Agara, Jakkur-Sampigehalli and Kalkere-Rampura) and the BBMP and the BDA had sanctioned building plans resulting in violation of buffer zone.

The audit report also takes on record a flippant reply to this audit observation by Member, Town Planning, BDA dated November 2014 where it is argued that “residential layout plans were approved excluding buffer zone of 30 metres”. The CAG report notes that during a joint physical verification in the cases mentioned above, it was observed that private and BDA layouts had come up within the buffer zone.

State Urban Development Department replied to this audit observation in March 2015 and stated that “the buffer area of lakes are owned by private people and development activities are going on at a rapid pace due to escalation of land prices”. This reply had also sought to argue that the matter of “enforcement of buffer zone vests with the planning authorities”.

The CAG audit report states that “the reply is not acceptable, as it indicates that the State Government has not taken any effective measures over the years for ensuring protection of the buffer zones”.

According to the National Lake Conservation Program (NLCP) guidelines, the rejuvenation of lakes has to be carried out by preserving the gentle slopes of the shorelines. During audit scrutiny it was found that in 20 test checked lakes, even the estimates and Detailed Project Report had made provisions for deep cutting and formation of elevated ring bunds with stone pitching.

CAG auditors relying upon NLCP guidelines argue that “the execution of elevated ring bunds has disturbed the gentle foreshore slopes and shallowness at the mouth of the lakes which would, therefore, not support flora and fauna,” and even presents photographs of such embankment works at Chokkanahalli Lake and B Narayanapura Lake on page 40.

The Urban Development Department on the contrary, in its reply dated March 2015, argues that due to urbanisation not enough area was available for maintaining the foreshore area. The CAG report has called this reply, like many others, unacceptable.

Not enough information on public domain

The CAG audit report states that there existed minimal information such as names of lakes, budget and expenditure and jurisdictional officer’s contact details. The audit scrutiny also found that there was no mechanism to address complaints related to lakes within Bruhat Bangalore Mahanagara Palike (BBMP), Bangalore Development Authority (BDA) and the two city corporations.

Out of 56 lakes checked, 16 lakes had shrunk considerably or dried up as the inlets were either encroached upon or diverted. The reply to this audit observation by Urban Development Department dated March 2015 said: “inlets and outlets were technically designed and constructed and there were no incidents of inundation surrounding the lakes developed by BBMP”.

Lake area not uniform across all records

During the audit scrutiny, it was also found that:

The audit report indicated that the mechanism for conservation and restoration of lakes was weak. Lake Development Authority, which is the regulatory institution for monitoring and supervising activities of entities involved in restoration works of lakes, was inactive and had failed in carrying out its mandated roles and responsibilities. LDA was operating without having any branch offices, although it has jurisdiction over other areas of city corporations and city municipal corporations in the state.

The audit also observed that the LDA operated with limited number of staff, and lacked any statutory powers to take actions and didn’t initiate measures for an integrated approach for restoration of lakes consisting of all related government entities. Coordination among the implementing authorities was deficient, resulting in works taken up without adequate prioritisation, no construction of sewage diversion channels, fencing without removal of encroachments etc.

In its reply dated December 2014, LDA argued that due to various constraints, they could only perform the role of mediating between the citizens and the custodians of the lakes. In a similar response dated March 2015, Urban Development Department of state government accepted that “the development of lakes was being taken up based on fund availability and not based on any comprehensive planning”. Taking their reply on record, CAG auditors concluded that “the works were taken up in an ad hoc manner without prioritisation”.

The performance review also carries multiple photographs of the lakes that were inspected under Joint Physical Verification visits by auditors and LDA as well as other officials. Many other audit observations stress upon the need for communities to be more vigilant.

Lakes Bengaluru swallowed up for development
High Court rules to stop destruction of Bangalore lakes
Developing lakes should go beyond engineering, to be sustainable
Lake evangelists ask for a single agency to focus on saving Bangalore’s lakes
Will PPP destroy lakes?

Lack of political will, lots of confusion

What is the impact of the ban on Child Labour? Did it help eliminate this dreadful practice? There is confusion aplenty and a dearth of political will.

The now dry Hesarghatta lake in the outskirts of Bangalore, which has supplied water to the city for over a century, is a mute victim of environmental ravages. See our slide show.