The recent push is the Bengaluru Metropolitan Transport Corporation (BMTC) putting out a tender for private companies to add electric buses to the diesel fleet. Last date for submitting bids is February 19, 2018. 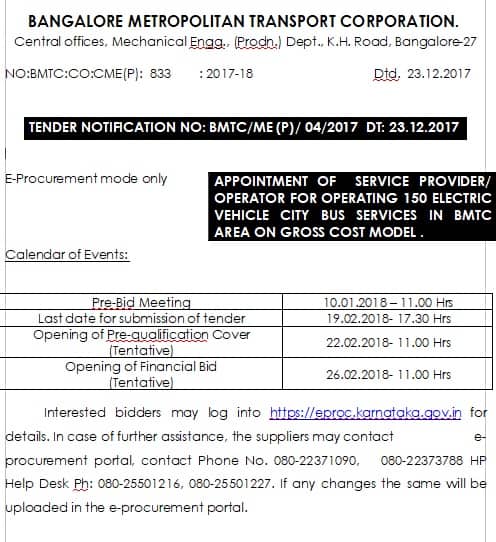 According to Ashwin Mahesh, an urbanist and social technologist, the production of electric vehicles is quite a challenge, and will take time to stabilise. As the design, strategising and building of buses is a steep call, it is a tall task to go only by a pilot project. There might be some promising early numbers, but they are not adequate for making such production scalable, he said.

However, the BMTC hopes that bus manufacturers, private operators or a consortium would take up the challenge, according to V. Ponnuraj, managing director, BMTC.

The National Electric Mobility Mission Plan (NEMMP) 2020 was announced in 2015 to boost the growth of electric and hybrid components of the automotive sector, focussing mainly on fast-tracking the manufacturing and introduction of electric vehicles. Still, when a bidder becomes successful, it would still take time for the scheme to roll out.

After accepting the BMTC regulations, the operator who won the tender is required to add 150 electric buses to the city’s fleet and then get them to work on the roads for a decade. That puts Bengaluru in quite a creditable situation, as it becomes the first state-run corporation operating electric buses on ‘Gross Cost Model’.

The bidder could get paid by the BMTC on a contracted rate per kilometre basis. He would need to offer a fleet of buses, the personnel, including trained drivers and technical staff. The contractor would also provide the infrastructure, with special features, such as charging points. Conductors would also be trained to work out the rates, routes and operations after debating them extensively with the operator.

The tender document suggests that the BMTC is planning to operate either nine-metre buses with 31 seats or 12-metre buses with 42 seats. The operator has to ensure that every bus runs for 200 kilometres every day, and that the entire fleet of 150 buses should be available for operations with manpower and supervising technical staff.

The electric buses idea for BMTC was sown in 2014, when India’s first e-fleet was planned. However, it remained just at that level – an idea. It demanded too much investment. It has taken three years for it to incubate and grow.

Buses could increase revenues and profits for BMTC

Even today, the cost of every bus is priced at thrice the amount of a diesel vehicle that is slated to be priced between Rs 2-3 crores, which would be borne by the transport corporation. The expected subsidy per bus would be between Rs 85 lakh to Rs 1 crore, even as the remaining costs will be borne by the  corporation, according to the BMTC managing director, V Ponnuraj. Even other spare parts made in India can be used for just 35 percent, which would fetch every bus an additional Rs 15 lakh, adding up to a total of Rs 1 crore.

Once this happens, the buses would hopefully cost less than they were pegged at some years ago. It is hoped that the entire costs would work out to be less than ₹300 crore. Due to the reductions in the battery costs, there seems to be a hope for a reduction in overall prices.

In fact, there is even a new scheme, according to the Faster Adoption and Manufacturing of Electric Vehicles India (FAME India), which could work out to support each electric bus with an added ₹1 crore. Even as it is hoped that the fare would drop below those charged by air-conditioned buses, the real figures cannot really be figured out at this stage.

Is the state ready to earn a large sum from such a massive one-time investment? Surprisingly yes, it is. A large sum can be made, according to an Indian Institute of Science (IISc) study. Electric buses are ready to produce 27% more revenue and 82% more profits than diesel buses.

More than the costs and profits, the real, long-term impact is that if the BMTC buses are replaced by e-buses, almost 25 tonnes of carbon dioxide emissions can be reduced every year. Hence, the big take-off from the exercise would be the fall in pollution.

Lithium Urban Technologies, a company that’s into corporate service through electric cars, was founded in 2015 by Sanjay Krishnan and Ashwin Mahesh. It was kicked off in the city with just 10 electric cars, running on the tagline, “Tomorrow’s Transportation, Today.” It launched an all-electric car fleet service, with the help of Mahindra e2os, for corporate organisations that need employee and inter-campus vehicles. The company’s first customers in Bengaluru happened to be TESCO, VMware and Total Environment.

Today, Lithium has more than 300 vehicles criss-crossing in the city, along with some more vehicles in Hyderabad and Delhi. Every one of them is traversing 200 to 300 kilometres everyday. That works out to more than 60,000 kilometres of transport that is free of hydrocarbon emissions, non-renewable fuels and pollutants.

Lithium services only private corporate houses. But it faces the challenges of vehicle availability. “Service requires products, isn’t it?” asks Ashwin. He explains that while about two to three products could be made per month, the actual requirement for a city would be about 100 to 200 per month! That would take a long time.

Preetham Kumar Sinha, Director of Autozine, is earnest about introducing e-rickshaws in the city. He mentioned that Delhi and Kolkata are already running Kinetic Green clean alternatives to pollutant vehicles. Mysuru too has introduced them. Surprisingly, Bengaluru seems to be lagging behind, even though the government has wanted to develop the city as the “national e-capital”.

“It’s the oil mafia that is preventing the introduction of these alternative energy initiatives in the city,” says Sinha. These are very cost-effective vehicles that would be priced only at 1.65 lakh per rickshaw.

“We are working on launching last mile connectivity for Benguluru Metro and BMTC feeder services with e-rickshaws,” says Sinha. Yet, the proposal to introduce e-rickshaws with a maximum speed of 25 kmph in the city has faced some teething troubles, as they are smaller than e-autorickshaws that have a speed of 75kmph.

According to B. Dayananda, as quoted by The Hindu, Commissioner for Transport and Road Safety the smaller and slower vehicles are feared to cause congestion and slow down vehicular movement in an already overcrowded city. According to traffic expert, M.N. Sreehari as quoted by The Hindu, vehicular movement in the city has already slowed down over the years, with 13 types of vehicles already moving in the narrow roads. Introducing e-rickshaws would be costly.  Besides, e-auto-rickshaws can accommodate technological integration, IoT (Internet of Things) capabilities and safety, complete GPS tracking and sensors.

Thus, at a time when the world is tottering on the precipice of climate change, Bengaluru is on the way to becoming a pioneer in introducing electric vehicles, thus cutting carbon emissions for a cleaner and greener future.

Full disclosure: Ashwin Mahesh one of the trustees of Oorvani Foundation, that funds the journalism done by Citizen Matters. Preetham Kumar Sinha is one among the citizen writers for Citizen Matters.

Health insurance for informal workers: What are the options available?

Informal workers spend a large part of their income to avail healthcare. But there are various government and other insurance schemes that offer them health cover. Here are the details of these schemes

RWH in a layout: Residents are water managers

Residents Welfare Associations are critical and empowered players of water governance at the local level. The concluding part of the RWH series.