It is impossible to visit Bengaluru for the first time and not be surprised by many of its urban aspects – from its noise and pollution to its ingenious ways of moving thousands of people by auto rickshaws; from its densely-packed streets to its large parks; from its lack of drinking water and its foaming and burning lake to its growing network of metro stations; from its pressing inequality to its booming IT industry; from its growing informal housing and business to its rich mixture of cultures and history, food and markets, old bookshops and new and trendy art galleries.

Bengaluru presents itself as a promising city, with severe challenges to deal with in the upcoming decades.

In fact, Bengaluru is larger than most national capitals of the world. Yet, within the Indian context, Bengaluru is not even the largest city of its country (Delhi, Kolkata and Mumbai are larger) and is the 20th largest metropolitan area of Asia. Large Asian cities are more the norm than the exception.

If it is not its size, maybe it is its growth that makes Bengaluru special. The boom of the IT industry has attracted thousands from other regions of India. From 1980 to 2019, Bengaluru’s metropolitan population increased from 2.8 million to 11.8 million. For every person that was in Bengaluru in 1980, now there are more than four.

But does this make Bengaluru unique? India’s population is still experiencing fast growth accompanied by an increase in urbanisation rates. Thus, with more people and a larger share of them living in cities, is it even surprising that Bengaluru is growing so fast?

Although cities experience growth at a different pace, Bengaluru’s population growth is, for most of the years since 1980, actually below the rate of Delhi and Jaipur and many more Indian and Asian cities. Cities growing at a very fast rate is again, more the norm of Asian cities than the exception. 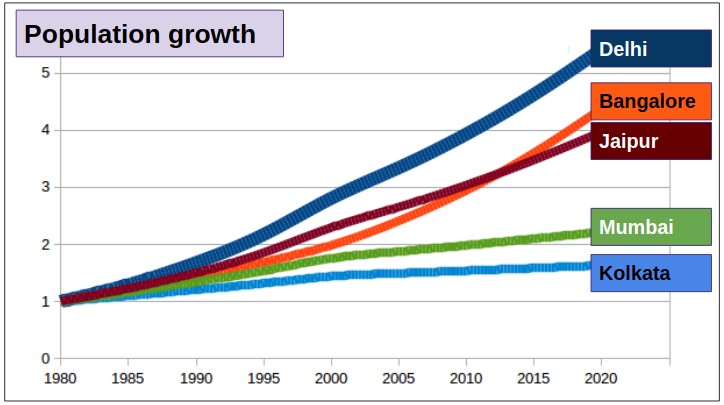 The pattern will repeat with other Indian cities

Having observed just one city, Bengaluru, it is clear that its traffic, noise and pollution are the results of a transport system that has been put under stress for decades. The same streets and avenues that used to move hundreds a few years ago are now forced to move thousands.

The city’s growing demand for water and energy, and its production of waste are also severely affected by city size. In a period of 30 years, the city has had to find four times the amount of water it used to. Water stress is mainly driven by population growth, and this is not exclusive to Bengaluru.

And this is very different in other parts of the world. In Mexico, for instance, Mexico City’s metropolitan area represents 17 percent of the country’s population and nearly one in three Mexicans live in one of the five largest cities of the country. India has ten times the population of Mexico, but Indian cities are not ten times larger and do not have ten times the population of Mexican cities. Rather, India has many more still-growing cities and most of India is still not living in cities.

India is projected to become the largest country within the next decade, and so many of its cities will also continue to grow at a fast pace. The arithmetic story told by Bengaluru and its rapid population growth, with its related challenges and need for innovative solutions, is the upcoming future of dozens of Indian cities. The pattern repeats.

[This article was originally published at PEAK Urban, and has been republished here with permission]

The city slips into a garbage crisis as Bellahalli dumpsite fills up, High Court orders BBMP to set up a complaints system on road conditions within six weeks, the first government-run milk bank in south India will start in Vani Vilas Hospital soon. Read more on what’s happened in Bengaluru this week

S Raghu started his political career as a municipal corporator from the Bharatiya Janata Party (BJP) in 1996. He has won twice from his current constituency of C V Raman Nagar which is reserved under

Data on how much money will be spent where according to budget, out of the grants provided by the state and 14th Finance Commission grants.