This month, the Karnataka state women’s football team is in Arunachal Pradesh, in high hopes of winning the Women’s National Football Championship. As the national championship enters its 25th year, the women’s game in India and Karnataka is at a turning point too. More women than ever are playing the game, and the official machinery is keen to support them.

Playing for Karnataka at the national championship is 15-year-old Tanya Gupta, who scored the winning goal in the Independence Day Cup in Bengaluru last month. That tournament was opened to women just this year, for the first time in its 63-year history. 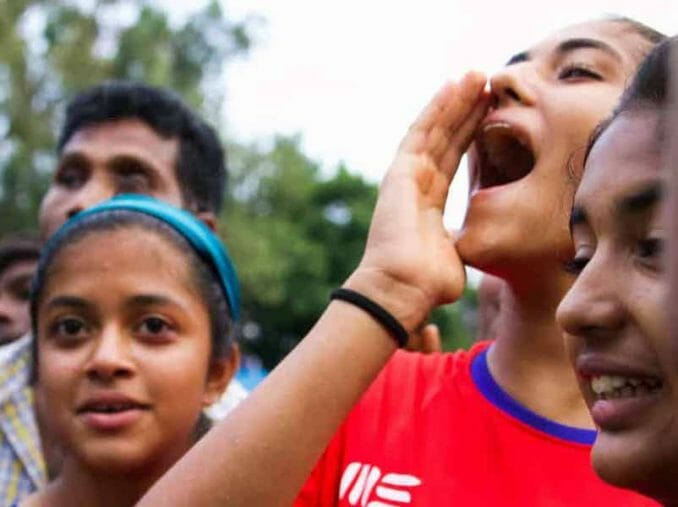 Every kid who grows up playing sports dreams of playing in a packed stadium with a roaring crowd. As these fantasies play out in our imagination, we buy jerseys of our favourite athletes, hoping the magic we witnessed on our screens or out on the field would somehow infect us.

By the time we grow older and reality sets in, most of us realise that this dream would never live outside our imagination. We will never get to score the winning goal, strangers won’t be cheering us and our names won’t live in infamy.

But there’s an exception to this.

Any tried and true football fan in Bengaluru will tell you that the Independence Day Cup tournament is one of the biggest football events in the city. Playing at the East Grounds – the sacred dirt fields by the Bangalore East Railway Station – is a privilege that many of the city’s footballers dream of.

“We used to call it the mini world cup,” says Dharmendra Babu, a former professional footballer and a previous champion of the tournament, who is now approaching 50. Traditionally played barefoot and 7-a-side, the tournament let women’s teams keep their boots on, this time.

An empty dirt field, with faint chalk lines marking the boundaries, lies beside the Bangalore East railway station in Frazer Town. A big tree grows near one of the sidelines, and occasionally participates in the game when its branches catch a flying ball.

The seating around the stadium consists of just a few rows of concrete slabs covered overhead by aluminium panels sprouting from the compound wall around the field. Spectators who watch from the sides of the field become part of the action. The first row of concrete stands also marks the out-of-bounds line for that side of the field, no chalk needed.

Once the stands fill up, spectators fill the perimeter of the field shoulder-to-shoulder; others climb the compound wall around the field and perch atop their columns. Some others scramble up a staircase in the railway station that overlooks the field.

“In this tournament, the spectator is more like a player on the field,” Babu says.

The men’s knockout tournament has been going on since June, with 64 teams battling for a spot in the semi-final on Independence Day. The women’s tournament had just eight teams, with the quarterfinals held the Sunday before, on August 11th.

On Independence Day, people trickled into the grounds for the first women’s semi-final in the morning. At that game, you could still see the outline of the dirt field, and empty seats in the stands. By afternoon, the field was packed.

A precise storm of events seem to have come together recently, that suggests that women’s football in India is on the brink of breaking into the international scene.

The Indian Women’s League (IWL, female counterpart of ISL) had its third season this year, and states are creating their own leagues – such as Karnataka’s Super Division League – to funnel teams into the IWL. The Indian national women’s team has a female coach for the first time, and there seems to be excitement for women’s football across the globe following the Women’s World Cup this summer.

Kuntala Ghosh Dastidar, 57, who was a member of the women’s national team back when it started, recalls what it was like. “When we started in ’75, nobody thought we could play football. Even the doctor asked us to stop playing, saying it’d be a problem to be a mother,” Kuntala said.

There was one particular exhibition match with the national team that she remembers. “People were running to see us because they never saw girls playing in shorts, and they said ‘oh let’s go see their legs’,” Kuntala says. “And when they saw us playing football, they were astonished.”

Kuntala says she’d never thought she’d get the chance to represent her country in any capacity, and definitely not through football. Women who played on the national team were never paid; it was love and passion that fueled them.

Raksha Panwar, 24, who has played for India’s national youth teams and currently plays for Parikrma club, recalls how her family was supportive of her football aspirations when she was growing up. But many neighbours in her hometown didn’t feel the same way. “Every time she plays with the guys, she kicks the ball, she walks like a guy,” Raksha describes her neighbours saying.

But when other girls saw her play and win, they wanted to play football too. So Raksha invited them to train with her. “They played for some 20 days, and then their families said – ‘nothing will happen if you just play, go study, be at home’. And as you know about India – [the idea that] girls are only made for being in the kitchen and taking care of the family,” she says.

Ritika Srivatsan, a Super Division player of Karnataka, who is even younger at 17, explains that football was dominated by boys when she started off too. Her school didn’t have a girls’ football team; so she and a teammate from the club she played with, started one.

When Diya Vikram, 15 – who has played with Raksha for Parikrma – was in sixth grade, her school announced they would be starting a girls’ football team. “I remember when they announced it, everyone started laughing. At that moment I felt that I needed to prove something,” Diya says.

Many firsts for Indian women’s football

In March, it was announced that India would host the U-17 Women’s World Cup next year. This would be the first time India hosts a women’s world cup, and also the first time an Indian women’s football team participates in one.

While there are great hopes around the tournament, there is also concern that nothing will happen, as was the case after India hosted the U-17 Men’s World Cup in 2018. “There were more people watching and playing, but it didn’t change how football works in India. They don’t have more leagues, there’s nothing different,” Ritika says.

But support for the game is growing. Over 1.3 million people showed up to watch the U-17 Men’s World Cup, setting a new record for the event. ISL’s viewership is now the third highest of any sports league in India, falling behind only the IPL (Indian Premier League) and PKL (Pro Kabbadi League).

As for women’s football, the AIFF (All India Football Federation) has a strategic plan for 2019-2022 that focuses on growing the IWL, supporting state leagues, structuring a pipeline of talent by starting state youth leagues, along with the Baby League for kids under 12.

Following AIFF’s mandate, the KSFA (Karnataka State Football Association) formed its women’s Super Division league this January, and plans to create a lower A-Division for more girls to play in.

KSFA General Secretary M Satyanarayan, who spearheaded the formation of the Super Division, says,“Our personalities were built because we took to the game and we learned lots of things, which then help us to be tough. People don’t realise this, but the girls will slowly pick up. I don’t know how many of them will last the grind, but it is our job to ensure that they become better players.”

Monsoon delayed the women’s final of the Independence Day Cup. After waiting out the rains, the crowd slowly trickled back into the stands, and the lines were redrawn on the now-muddy field.

In under an hour, for the first time, a team of women would raise the Independence Day Cup. Young Stars FC – a conglomerate of young players from all over the city, formed in June – and a team from the Indian Football Factory, faced off in front of thousands of spectators.

The game was ultimately decided by Tanya Gupta, a 15-year-old who had played for Prakrima at Karnataka’s Super Division League in January. Gupta’s goal cemented that Young Stars FC will go down in the books as the winners of the first Independence Day Cup open to women.

Before the tournament, Gupta had never heard of the Independence Day Cup – the tournament’s ongoings are not advertised anywhere beyond those who already know about it. Her father told her he used to watch the games as a kid, but that’s about all she knew.

“We were so overwhelmed with everything,” Gupta said. “It was a once in a lifetime opportunity – we only realised the immensity and importance of it after we won.”

Next year, the organisers hope to expand the tournament, with 16 teams for the women’s side.

“I saw parents coming and cheering for their daughters. That’s such a wonderful thing,” Babu said. “The spirits were very high, that’s something I never saw in my playing days.”

The interest and support for women’s football is at its highest now, as is the number of girls playing the sport. With the U-17 Women’s World Cup just a year away, players, spectators and football associations hope that Indian women’s football is now at a turning point in its growth.

About Grace Madigan 12 Articles
Grace Madigan was an intern from Seattle, Washington. You can follow her @grace_madigan19.
Twitter

E-autos gaining traction as last mile option: What will it take to make them viable?

E-autos are pollution free, cheaper to maintain and provide a better riding experience. What needs to be done to make them ubiquitous?

As enthusiastic Bangaloreans crowd Lalbagh to view the Republic Day flower show, Jatin Prabhu joins them and learns a few things from the colourful extravaganza.